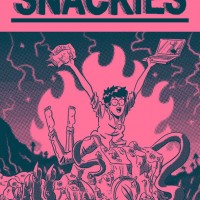 If a snack is a tasty little bite of fun food between meals, a snackie must be an even tinier, more fun-filled nibble of something good. And that’s exactly what Nick Sumida serves up in his collection of mini-comics Snackies.

The playful design of this book include its small size, it’s bubblegum pink cover and the way it riffs off the look of a smart phone and texting, both capturing and parodying the mentality of millennials. But good design is no surprise coming from Youth in Decline, a publisher whose comics line-up includes the work of hip artists like Hellen Jo and Sam Alden.

Sumida’s comics poke fun at the narcissism and insecurities young people face in a world of selfies, contract jobs, and dating woes. Many of these comics made me laugh out loud. I think my favorite is “Fake it ‘til You Make It.” In this story, Sumida applies for a job which the hiring rep says requires, “[…] expertise with Photoshop and After Effects. If you aren’t familiar with those two programs, then we’ll need to consider other…” Sumida cuts her off, assuring 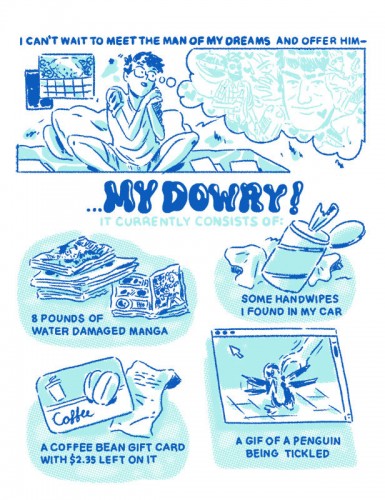 her he’s experienced. Who hasn’t applied for a job like this, where knowledge of software trumps any degree or years of experience? Sumida tries to pull an all-nighter and bone-up, but ends up submitting some of the most hilariously awful work the next day (a vagina smoking a joint, a baby exploding out of a dolphin with the words “Candle in the Wind” written over it…are you laughing now?)

“It’s genius, we love it! We’re tossing our old ideas and we’re going with your vision on this campaign!” the company rep declares.

“Of course not. Get the fuck out of my office!” Another burst creative bubble.

Also, scattered throughout the book are one-page gags about texting with God. Heads up, God’s not much better than your bored online friends.

“I see you bitch.” God texts to Sumida in one, and in another, replying to a series of Sumuda’s mournful pleas, God apologizes, “Hey, sorry nom-noming out on some fries right now.”

Dating gets spoofed a lot. A series called “Missed Connections” are all about the one that got away…where the idealized boyfriend is actually Sumida’s own reflection, in a spoon, a mirror, and like Narcissus, in a pond. Many of the comics spoof social life online, for example acronyms such as ROFBYADASPYLCOSS (Rolling On The Floor Because You Are Dead And Someone Put Your Lifeless Corpse On Some Skateboards).

Sumida’s style is realistic, giddy, and goofy. Young gay guys will see themselves here, but be ready because Sumida’s not afraid to go wacko and throw in a few monsters from hell too. Snackies fits in perfectly on my bookshelf, right next to the mixed nuts and Frosted Flakes.