‘Second Avenue Caper: When Goodfellas, Divas and Dealers Plotted Against the Plague’ by Joyce Brabner and Illustrated by Mark Zingarelli

‘Second Avenue Caper: When Goodfellas, Divas and Dealers Plotted Against the Plague’ by Joyce Brabner and Illustrated by Mark Zingarelli 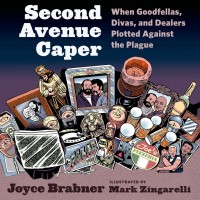 It’s been over twenty-five years since AIDS first devastated the LGBTQ community in the early 1980s. A buffer of time seems almost necessary to write about the fear, pain and loss in the community. In her new graphic novel, Joyce Brabner continues writing in the vein of the American Splendor comics she co-wrote with her husband Harvey Pekar, discovering stories, heroes and suspense in the daily activities of herself and her friends.

The hero of this book is Brabner’s pal Ray Dobbins, a nurse in New York City, who, along with his circle of friends, took it upon themselves to find help for those infected with HIV/AIDS, when the government and health care system basically ignored them. They began by funding their project by selling marijuana within their own group. But as more and more people became sick, Ray and his partner wanted to do more. And so they used their dope smuggling acumen and connections to sneak in other drugs, experimental HIV medications from Mexico the U.S. government had yet to approve.

At the time, Ribavirin looked like it might quell or stabilize some of the symptoms of AIDS. Ray and his hipster friends borrow a drug dealer’s RV remodeled with hidden compartments. And then in a stroke of genius, they use all their skills of costuming to transform their cool friends William and Penny into a retired couple from Indiana, disguised by gray hair and velour tracksuits, to drive the RV. They set up a smuggling operation that lets them bring loads of the drug into the United States, and even use an RV to try and honor their friend Hector’s dying wish, to see Disneyland (he doesn’t make it, but he does get a view of the Grand Canyon). They not only risked being discovered by the border guards, they also had to deal with unsavory drug dealers–there were scares on both sides of the border.

They purchased and imported drugs from 1982 until 1984. When Ribavirin was proved useless, they also tried Isoprinosine, which was supposed to boost the immune system. In the early days, everyone just grasped at straws. But these heroes made the straws available.

It was hard to feel hope in the midst of an epidemic, because both disease and prejudice. In one touching scene in the graphic novel, rather than turn to religion or cults, Ray looks out into the night sky.

“Matter turned into us: the planets, everything on the planets, the stars and all. And someday it will go bang again! Our star, the sun, explodes We all become…dust,”Ray tells his sick friend Gibby.

“But all of us…together out there? As stardust?” Gibby replies.

“Stardust. Together again.” This is what hope looks like, compared to the cruel fate of AIDS, delivered by an unfeeling universe.

Brabner’s book is illustrated by Mark Zingarelli, whose work has appeared in the New Yorker, Esquire and a gazillion other magazines. His black and white drawings are reminiscent of newspaper comics, and they blend well with the “crime thriller” feeling of this tale of good people having to go ‘”bad” to do good.  I loved Brabner’s note at the end, the note states that in 2006 she was inspired to write this tale of her courageous misfit friends by the zines, mini-comics and pamphlets she discovered by younger creators. Readers will likewise be inspired by her comic, which shares a true story of heroism via art. Readers will discover the power of reading a well-crafted true story—a story that provides an important testament to often overlooked histories, that are well worth remembering.