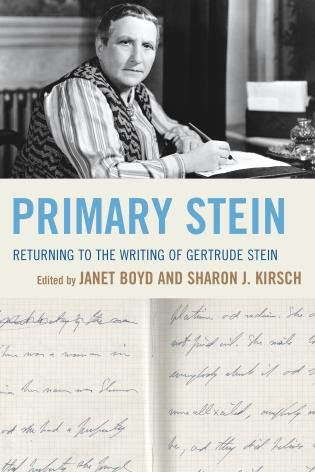 A return to critically reading and critically writing about Gertrude Stein’s writing are the objectives of the latest volume of literary criticism on Gertrude Stein. Entitled Primary Stein, editors Janet Boyd and Sharon J. Kirsch have brought together over a dozen essays that move away from the contemporary critical trend of writing more about Stein’s historical person–especially during World War II–than the writing itself.

Only two essays that close the volume directly engage with the recent controversy surrounding how Gertrude Stein and her partner, Alice B. Toklas, two elderly lesbian Jewish women, were able to survive in German-occupied France during the War with the help of Nazi advisor and close friend Bernard Faÿ. Steven Gould Axelrod writes the definitive statement on the controversy in his essay, “Mrs. Reynolds: Stein’s Anti-Nazi Novel,”

It is hypocritical for us, in the safety of our privileged situations, to judge the actions of people like Stein and Toklas, living on the verge of unspeakable suffering and death. We don’t know what we might do to stay alive in such circumstances. You had to be very canny and lucky to survive in that situation, and Stein and Toklas were. They almost certainly didn’t know what Faÿ was doing on the job, and they probably didn’t inquire. They weren’t heroes, because they saved no one but themselves, but they were victims, and we should not be in the business of blaming victims.

The other twelve essays offer a diverse set of readings of primary texts, from manuscripts to other archival materials, accessible, for the most part, at Yale’s Beinecke Library, where the Stein archive is located.

Some pieces, like Boyd’s standout “Gertrude Stein’s Geographical History of Literature,” analyze Stein’s nonfiction. In her essay, Boyd examines Stein’s use of time and space in terms of geography, and how she then divides literary history by nation. A trio of essays by Linda Voris, E.L. McCallum and Sarah Posman study the cognitive and philosophical elements of Stein’s writing. Posman’s essay focuses on the light of Stein’s play Doctor Faustus Lights the Lights to re-imagine the Germanic continental philosophy of the 19th century: “With Doctor Faustus Lights the Lights,” Posman concludes, “Stein answers Goethe’s last words in making Faust the inventor of electric light….”

Primary Stein heralds a return to where the impetus of literary critical should lay: with the writing itself, rather than with a character assassination of a nearly 70 year-old Jewish lesbian who was just trying to save her life (as well as the life of her also Jewish lesbian partner, Alice B. Toklas) during World War II. With this collection of essays, Boyd and Kirsch remind us about the scope and sophistication — as well as the playfulness and sensuality — of Stein’s writing.

‘Eleanor, or, the Rejection of the Progress of Love’ by Anna Moschovakis
'The River in Winter' by Matt Dean
In Remembrance: Adrienne Rich