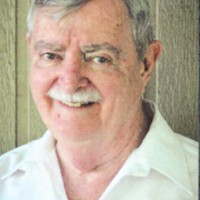 It is with profound sorrow that we announce the passing of one of the foundational figures in the history of Lambda Literary, James Duggins, Ph.D.

A former board member, his presence during the latter and most formative years of Lambda Literary was vital for its very survival. His memory will live on forever with his role in the creation of the annual Emerging Writers Retreat, and in the Mid-Career Novelist Award, one of the most prestigious prizes awarded annually in LGBT literature.

Jim led a life of extraordinary achievement and significance. A Navy journalist in the Korean War, he afterward graduated from San Francisco State on the GI Bill and received his Ph.D. from UC Berkeley. He began his teaching career in one of the toughest areas of San Francisco, the Mission District, then taught community college, and retired as a full professor from San Francisco State.

He was among the first to join the fight for LGBT rights in the UC university system, a crusader for partnership benefits. His lifelong passions were community and equality and he became a philanthropist extraordinaire in support of the community he loved: a major donor to Horizons Foundation, NCLR, Lambda Literary, and other organizations he deemed to be at the forefront of the struggle for our civil rights.

A noted and notable writer and critic of historical fiction, he studied the craft under James Michener. His early work includes co-authorship of Hooked on Books (Berkley), and Teaching Reading for Human Values (Charles Merrill). He wrote many articles for academic journals such as The English Journal, The Journal of Reading, Wilson Library Journal.

His more current published work includes “A Rock and a Hard Place,” an account of his year as a clerk on Alcatraz in 1952 (yes, he met the Birdman) which appears in Love, Castro Street (Alyson). He is the author of a number of well received novels: The Power; Slave Stealer; The Man Without a Conscience; and The Possession of Sarah Winchester (Smoke Tree Press). His reviews and ratings of historical fiction are pervasive throughout the internet.

Jim died unexpectedly and peacefully at his home in Rancho Mirage in the beautiful California desert over the weekend, a week short of his 81st birthday, surrounded by the Mexican art he lovingly collected over the years. He was a close friend of Lambda Literary, a man with an enormous generous heart who loved dearly the people around him and was dearly loved in return. We will miss him.

Twenty-One Boxes of Back Issues: A Summer of Preserving Literary History
Maggie Nelson: On Writing 'The Argonauts' and Doing Justice to Queer Happiness
Larry Closs: Bringing Back the Beats with 'Beatitude'