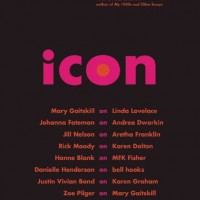 Much like Supreme Court Justice Potter Stewart’s famous definition of pornography, it may be difficult to say exactly what makes some individuals “icons,” but we know them when we see them. In this new collection, Amy Scholder, former editorial director of the Feminist Press and current Lambda Literary Board member, presents readers with a series of rich, thought-provoking essays on a range of women that fit that status in the eyes of its nine authors.

For all the contributors to Icon, authors Hanne Blank, Mary Gaitskill, Danielle Henderson, Rick Moody, Jill Nelson, Zoe Pilger, and Kate Zambreno, musician Johanna Fateman, and performer and writer Mx. Justin Vivian Bond, the women they discuss act not so much as muses, but rather as guiding spirits, sources of power, and fonts of encouragement. In some cases, the authors go to the edge of turning them into heroines or patron saints, although none of their subjects–Kathy Acker, Karen Dalton, Andrea Dworkin, MFK Fisher, Aretha Franklin, Mary Gaitskill, Karen Graham, bell hooks, and Linda Lovelace–can be considered complete angels. As Danielle Henderson writes, “I encourage people in my life to find someone who is doing exactly what they want to do, and to see a path for themselves in their footsteps. I found that in bell hooks. Maybe someone will find it in me.”

As Amy Scholder suggests in her introduction when she writes, “Public figures easily become symbols, ideas, icons….What I’ve come to realize is that in looking for them, I look for myself as well,” the best essays in the collection are the most personal, such as Henderson’s on hooks. Kate Zambreno wrestles with both the persona and the work of author Kathy Acker. Justin Vivian Bond beautifully and hilariously merges with their icon, Estée Lauder model Karen Graham, while Hanne Blank pulls a stunning 360-degree turn away from just this kind of intense identification in the second half of her outstanding meditation on culinary writer MFK Fisher.

Mary Gaitskill’s essay on Deep Throat star Linda Lovelace is a great (dare I say even “seductive”) opening to Icon, and points to another thread in the collection, that an icon can also be imperfect, contradictory, frustrating. The essayists do not shy away from the flaws in their subjects. Founding member of the band Le Tigre Johanna Fateman, writing about anti-porn activist Andrea Dworkin, shows us that an icon may not even be a “positive” person or perfect role model. In fact, part of the writer’s attraction is their imperfections. What is important to these authors is what the women create for them, or in them, as Jill Nelson says about diva Aretha Franklin and her iconic rendition of “Respect”, “Aretha sings into existence a universe in which the pitfalls are many but the possibilities are endless. Her voice creates a world in which I can be vulnerable, sexy, voracious, smart, demanding, powerful, and no less a woman, no less attractive for it.”

There are only two missteps in this otherwise outstanding collection. British author Zoe Pilger turns in more of a term paper on the influence of the short story, “A Romantic Weekend,” on her first novel, Eat My Heart Out, than an actual consideration of fellow Icon contributor Mary Gaitskill. The lone male in the collection, novelist Rick Moody, contributes a good deal of words on Karen Dalton, in an attempt to straighten out the tangle of misinformation and myths surrounding the folk singer. However, his essay does not bring the reader much closer to understanding her, or to Moody and why she is important to him. He mentions becoming “musically obsessed” with Dalton’s song “Something on Your Mind” and other childhood moments of “obsessive fainting spells, these moments of hysteria” around particular pieces of music, and one wishes he’d delved deeper into those moments and feelings.

Indeed, it is striking how many of the authors in Icon were imprinted by their subjects in their teens or other formative moments in their lives, while working out who they were, and who they were not. Perhaps that is the true role of an icon, to act as a kind of beacon. She points to the future and says, be this: Be yourself.

A Poem by Lisa Summe
'Anatomy of a Girl Gang' by Ashley Little
Appreciations: Cheryl Clarke's "in this hostile corridor"