‘A History of the Unmarried’ by Stephen S. Mills

‘A History of the Unmarried’ by Stephen S. Mills 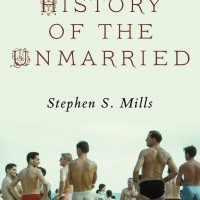 In his latest collection of poems, A History of the Unmarried, Stephen S. Mills candidly explores what intimacy requires and bestows, within or without the formal institution of marriage. As the title promises, some of these poems chronicle the origins and evolution of a loving partnership. Others, though, are meditations on the vulnerability, the trust—and even the anxiety—that both emerge from and shape a closeness that deepens over time.

In counterpoint to his examinations of how intimacy develops, Mills considers the specter of a stifling and confining domesticity whose costs are self-abnegation and rage. The collection is punctuated, occasionally, by “Housewife Etiquette” guidelines that are, he notes, “based on a guide to being a good wife, which was included in 1950’s textbooks.” In reflections on the struggles of Sylvia Plath or the mesmerizing but compromised allure of Betty Draper, Mills does not suggest that the very idea of marriage itself is necessarily bound to these archaic conventions that insist on paralyzing self-sacrifice. Rather, he posits the culturally-familiar stereotype of Mad Men-era heteronormative, patriarchal marriage in order to cast in even starker, more remarkable relief the kind of love that accommodates personal growth, emotional vulnerability, and change.

Many of the most compelling poems in the collection examine the liberties—sexual, intellectual, and imaginative—that intimacy can actually encourage, not just withstand. In these poems, even sexual freedom, when openly granted and shared, can become a manifestation of closeness. In “Obama Says Same-Sex Couples Should Be Allowed to Marry, May 2012” which imagines the aftermath of a shared hook-up, Mills writes about a physical closeness that can find expression sexually, while also being comprised of more than just the sexual. When the poem ends with a reference to the partners’ “bodies /  falling into familiar rhythms,” these motions are not sexual but rather the rituals of following each other gently into sleep. In other words, the inevitable end of such liberty, when shared, is not the loneliness of the sex addict encountered in “A Drunk Man Tells Me He’s a Sex Addict on the 4th of July.” As that poem closes, Mills’ speaker speculates on the limits of the man’s understanding of love, suggesting that he can only “try to imagine / two bodies holding each other in the way that only men who’ve been together for years can.”

But for all of its power, the cultivation of intimacy is no antidote to fear or doubt. Rather, it is a deepening of the ability to survive and accommodate them. It provides the space for the honest expression of vulnerability that emerges in the Whitmanesque echoes of “Us Gays Call You Auntie Sylvia”: “I’ve acted the fool. I’ve been jealous and paranoid. The thing /  is, everyone loves to read about insanity, / but few are willing to witness or put up with it.”

Similarly, in “Watching Sylvia While You Cart the Dying,” Mills reflects on the marriage of Sylvia Plath and Ted Hughes, of the similarities between the two relationships: “. . . Someday this could be us. / The splitting apart. The shouts. The cries. / We’ve had them, but we’ve always stayed.”

Intimacy demands the denial of fantasy. It invites us to see and to ask, in that finer seeing, whether we love in spite of what we discover, or in acceptance of it.

But from allowing ourselves to see and be seen, emerges the faith that we love and are loved as ourselves. The collection’s title poem, “A History of Unmarried” ends with a humble, gently powerful acknowledgement of what it is to love, and not just to be in love: “. . .We are just two men / choosing to stay.”

Here, as in so many of these poems, Mills reminds us that each day is its own negotiation. And the very notion of a choice suggests a consciousness of each other that makes such choosing a daily re-affirmation of what matters, and also of why it does.

'Our Young Man' by Edmund White
A Poem by July Westhale
‘Not Everything Thrown Starts a Revolution’ by Stephen S. Mills