‘Under This Beautiful Dome: A Senator, A Journalist, and the Politics of Gay Love in America’ by Terry Mutchler

‘Under This Beautiful Dome: A Senator, A Journalist, and the Politics of Gay Love in America’ by Terry Mutchler 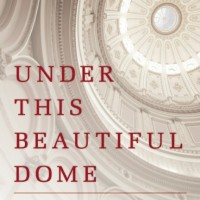 They say that a good novel will read like real life, and a good memoir will read like a novel. Terry Mutchler’s heartbreaking memoir Under This Beautiful Dome (Seal Press) is no exception, detailing her marriage to the late Senator Penny Severns. Mutchler has created a searing portrait of love in the face of death, as well as the corrosive power of secrecy.

In 1993, twenty-seven year old Terry Mutchler, the first woman AP State House Bureau Chief in Illinois, looked up into the halls of the Capitol building and saw Senator Penny Severns for the first time. She immediately felt drawn towards the charismatic and bold senator, and began to wonder if the undeniable attraction could be mutual. Part of what is remarkable about this memoir is how fully it illustrates a pre-Ellen Degeneres, pre-Rachel Maddow America—just twenty years ago. Mutchler and Penny’s budding relationship is all the sweeter for the fumbling code of trying to ask someone on a date while also trying to ask if they would ever date another woman. Complicating matters further is the professional boundaries they cross, as AP Bureau Chief and prominent senator.  Yet the couple tumble into puppy love, only to have their first romantic weekend doused in paranoia and fear. In one chilling scene, their lazy morning in bed together is interrupted by a sharp knock at the door:

That knock changed the way we chose to live our lives from the very beginning of our relationship onward. To this day, I loathe that knock, and loathe even more our reaction to that knock.

“I wonder who that is. Nobody in this town knows me,” I said, sliding out of bed, thinking, Did something happen to my parents or family? Is it a neighbor?

I thought she was kidding.

Thus begins Mutchler and Penny’s relationship, a love weighed down by complex lies, fears and charades. Mutchler would often park two miles from their house so as to not be seen. They woke early on the day the cleaning woman came to meticulously scrub away any sign of Mutchler’s presence—a stray long hair could cause detrimental suspicion. Yet every moment that Terry and Penny get to enjoy each other, they relish, and begin to build a life together—writing love letters to one another, buying a house (albeit with only in Penny’s name so as to safeguard their secret), meeting each other’s families (always introduced as friends), and marrying one another privately, (“We can’t [be seen] wearing wedding rings,” Penny tells Mutchler when she presents a ring and matching bracelet.) The tension that stands between their deeply felt love for one another, and the fragile secret of their relationship is expertly drawn in every scene. Doom blossoms in their lives when cancer enters the picture, and while making love, they discover a lump in Penny’s breast. She stubbornly skips her doctor’s appointment for a work event. A toxic mix of fear and anger boils between the two women, and Mutchler bridges the past and present as she reflects:

I don’t know how this is possible, even now, years later, as I sit in Penny’s Senate chair in my home office and watch these black characters appear on my computer screen, but Penny made and canceled two more appointments over the next four months. She didn’t go to the doctor until June, and it took another month to schedule the lumpectomy. Even then, we spun the news: ‘Caught early, less than two centimeters.’ Recently, I looked at a ruler. The same truth is that the lump was three-quarters of an inch…Penny and I made a pact that we would not tell anybody how we really found the lump.

Other complications plague their relationship. There is the question of faith, and what God thinks of their relationship, a question that later prompts Mutchler to bargain with God and make some rash decisions. There are also several moments where Terry and Penny broach the topic of coming out; they plan a picnic in which they will tell their families; they admit how good it would feel to give up the elaborate charade they’ve created—by this point, Mutchler works as Senator Severns’ press secretary, partially to provide an excuse for their constant companionship. Yet in the face of cancer, as well as Penny’s determined political career, they never follow through on the promise, until it is too late. The care the two women show each other in Penny’s final days is exquisite, including a scene where Mutchler carries her beloved through their home to view the art on the walls for a final time.

When Penny passes, it is only a few hours before Terry’s grief transforms into a nightmare. Penny’s twin sister and father deny Mutchler her own belongings, her own home. At her wife’s funeral, Terry is made to sit fifteen rows back, while the family sits in the front row. When Terry hastily packs a suitcase of household things she wants to keep of Penny’s, Penny’s sister asks for them back. Chapter after chapter of humiliations and horrors unfold, illustrating Mutchler’s struggle to grieve when being denied one’s own grief, and the time it will take her to finally tell the truth.

In a modern world that has seen an acceleration of gay marriage rights and public LGBT figures, it is crucial to honor and remember the struggles of those who could not love openly, afraid for their jobs, their homes, their families, and their beloved. Here is a memoir that painstakingly recreates that struggle, balancing layers of politics, love, family, faith and grief in every chapter. Mutchler has written a passionately honest and forthright memoir that is as much a candid portrait of true love as it is a brave remembrance of what lengths gay women and men have gone to for that love.