Kim Chernin and Renate Stendhal: On Writing Together as a Couple

Kim Chernin and Renate Stendhal: On Writing Together as a Couple 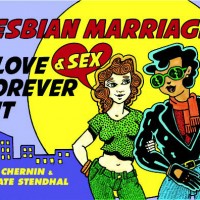 Kim Chernin and Renate Stendhal have co-authored three books in the course of their cross-cultural relationship of twenty-eight years. The authors, who are also relationship experts, continue their pioneering work on women and sex. In their most recent collaboration, Lesbian Marriage: A Love & Sex Forever Kit, they are sharing their own experience as well as that of friends and clients. They are now a married couple.

Kim Chernin, Ph.D., is the award-winning author of seventeen books, among them the bestselling The Hungry Self, the classic In My Mother’s House and the memoir My Life As a Boy.

Renate Stendhal, Ph.D., is German-born and Paris-educated. She has published several books in the States, among them a relationship guide for couples, True Secrets of Lesbian Desire, and the award-winning photo-biography Gertrude Stein in Words and Pictures.

Renate Stendhal: The most important feature in a writer’s life is finding a reader.

Kim Chernin: A reader who knows about writing, which is rare; a reader who will definitely tell you the truth about where things are working and where they are not; a reader who can stay within the writer’s vision and help the writer realize her intention, rather than the reader’s own wishes for the manuscript.

Stendhal:We were lucky to find this ideal reader almost the moment we met. Our first communications, after our encounter at a Paris café, were manuscript exchanges. We were excited: our compatibility as readers was visible. Reading for each other was our first collaboration.

Chernin: I had a good friend in Berkeley who liked to tease me about my idealism. “If you find that kind of reader,” he said, “you’ll have to marry her. That’s not just a reader, that’s a life-companion.”

Stendhal: And right he was! It took us merely 3 ½ years of letter and manuscript exchanges before this was clear. We met again in Paris and fell into our love relationship the next day.

Chernin: Luck had it that we turned out to be as compatible as lovers as we had been as readers. But in the beginning, we had a few things to learn from each other: never start any kind of communication with heavy, critical comments. Where writing is concerned, find what is working in the work, recognize and encourage it, and only when that process is accomplished, turn gently to parts of the work that can be lifted up to match the quality of what already works. It’s such an encouraging idea: to lift something up  to match the quality one has already achieved.

Stendhal: Where life is concerned: start with humor. This wasn’t easy at first, I had to learn and understand Jewish humor. Paradoxically, in Jewish humor, as Kim practiced it, you say what is taboo, you spell out the verboten thing, and if this is done well and the timing is right,  it cracks you up. Telling the truth without inflicting unnecessary wounds has become easier over time as we got to know each other more intimately. We discovered that writing, editing, brainstorming and egging each other on in inspiring and loving ways was a lot of fun, so much so that we got inspired to experiment with co-writing. We had no idea if this would work and if anything would come of it.

Chernin: That’s the beauty of an experiment, isn’t it? No one knows how it’s supposed to turn out.

Stendhal: As long as both writers agree that the result is interesting enough to continue.

Chernin: Since you don’t know where you’re going, you can only find out together, and perhaps you  will never know why something works or doesn’t. You have to become very interested in what she thinks. Does she know what I haven’t yet figured out? Why does she think this is working whereas I am ready to toss it? It made us very humble, trying hard to explain ourselves.

Stendhal: Perhaps particularly humble in my case as I had only just come to live with Kim in Berkeley, had been a cultural correspondent and translator in Paris, and had only published articles, whereas Kim was already a solidly established and successful writer. English was my second language, my “sister tongue” and I was fully aware of the comparative naiveté of my writing. But I was also quickly aware of the advantage of having a playful “fool’s freedom” I never had in my perfectionist German mother tongue. 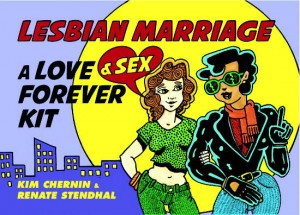 Chernin: I got an advance to write a book about women’s sexuality; those were the late ’80s, very good days for feminists in publishing. There was a large  audience for books written by women, about women, and for women and therefore there were good reasons to write one. Nevertheless, I didn’t really want to write the book; I was putting it off, finishing something else.…

Stendhal: I said, what women need right now is a discussion of sexuality that reflects women’s liberation from the constraints of being the “Second Sex.” Why not have two women debate different attitudes and beliefs about sex, invent a discourse that would be our home-grown equivalent of the “Platonic Dialogue” (Sex and Other Sacred Games, Times Books, 1989).

Chernin: Looking back, I see that we’ve had three distinct experiences of writing together. That first book we wrote separately; we built a structure that would allow us to maintain a careful distance from each other to guard our independence. The book would be divided into clearly defined, alternating sections.

Stendhal: We “sent” these sections to each other as “letters” between two women who had met in a Paris cafe. Each character then responded with another “letter” to the new text received. There was a suspense and a drive to convince each other of our different takes on women’s sexuality.

Chernin: We did not comment on our process or discuss our characters’ evolution. We only allowed ourselves to respond through them in their respective voices.

Stendhal: Only at the end did we become readers for each other and then wrote a section together. This final section took the form of a dialogue when the two women have met again in Berkeley and are taking a lover’s walk, contemplating Plato’s plane tree in the distance.

Chernin: Our next co-authored book was more collaborative but still maintained a separate writing process. We shared a passion for opera, and in particular for a singer, Cecilia Bartoli, whom we’d both heard in the very early days of her career and for whom we predicted spectacular success. We arranged to have an interview with her, which I published as a cover story for Focus Magazine.

Stendhal: Kim had an editor who loved opera. When he read the feature, he said, “This is a book.” Okay, it was a book. Kim said, “ Let’s write it together. Let’s combine our different visions of Cecilia into one complete whole.” Sort of, “Portrait of the artist as a young diva.” (Cecilia Bartoli: The Passion of Song, HarperCollins, 1997)

Chernin: This time, we kept an intense, ongoing dialogue about our different tasks of writing, commenting and editing each other as we went. I described the five concerts we’d heard Bartoli perform in Berkeley, and my all-night listening to the CDs she had been releasing every year. I was trying to describe the quality that made her voice so deeply emotional. I was convinced that she was herself entranced by the music she sang, and I hoped to get into words an echo of the exquisite beauty in the voice itself.

Stendhal: I took on the journalistic part: a critical, year-by-year account of every single role Bartoli had taken on in the first 10 years of her world career–with a number of early performances nobody had seen. We traveled all over Europe to the hidden archives of opera houses and festival halls where she had appeared. We called this our “folie à deux”–a passionate, collaborative folly that had its high point when we got invited to attend the first-ever master class Bartoli gave in Germany with her mother, who had been her only teacher.

Chernin: Oh, high point, was it?  A week or two later we had tickets to her concert in Paris and we happened to be sitting near her mother who invited us to go backstage with her after the performance. Don’t you remember? We walked  from the Bastille Opera to the café where we first met. We were so high I don’t think our feet touched the ground.

Stendhal: Yes, and with a café au lait we toasted our promise to continue our “folie à deux” by writing every new book together!  We didn’t exactly do that; our third collaboration was triggered last year by the California Supreme Court. Marriage equality had just been granted to Californians, and we found ourselves in the grip of history. We had never wanted to get married, until the demand for marriage equality became a political movement. We felt we had a lot to say about long-term lesbian relationships (a topic we had already written about), and this time we wanted to change the process of co-authoring a book. We wanted a real, spontaneously emerging dialogue, moment to moment.

Chernin: This collaboration was as different as it could be from our first two outings, which we had taken oh so seriously. By the time we wrote Lesbian Marriage: A Sex and Love Forever Kit, we’d been together for almost thirty years and had learned to laugh at many of the things that had troubled us in our relationship. We wrote most of the book sitting on a beach in Maui, trying to protect our I-Pads from the wind, laughing our heads off as we spouted out words, filling in each other’s sentences, correcting them as we wrote, waving to our neighbors on the beach who started to laugh along with us. It was seamless; by the end it would have been impossible to say exactly who “wrote” what.

Stendhal: This most playful “folie à deux” translated our usual, daily conversing and dialoguing into an immediate writing process, mirroring back to us our ease with the sharing of ideas, language, writing.

Chernin: It seems to me the whole process would have been stopped if competitiveness had crept in; or any kind of negative judgment, or impatience with the direction the writing/conversation was taking. They just weren’t there.

Stendhal: Instead, there was surprise, laughter and applause for what each of us was coming up with. It was inspiring–one idea feeding another. Like any good relationship, co-authoring demands a basic compatibility — in style and vision and execution, and when this is a given, differences are quite easily addressed and solved. We are a team after all, and team-work brings along all the advantages of not being lonely, doubtful, overly perfectionist, or any other over-the-top tendency we individually love to indulge.

Chernin: Still, in our first book we really and truly disagreed with each other; our views of women’s sexuality differed profoundly, Renate’s being more “feminist,” mine more outrageously hetero-sexual. I’ve always had the impression that we moved successfully through these disagreements because we wrote together and were able to give over to our characters what we had to resolve between ourselves. Maybe that collaboration was a kind of extended couples-therapy?

Stendhal: With a happy ending: We wrote an epilogue to our latest book: “On October 28, 2013, Renate Stendhal and Kim Chernin had been together for 28 years. To celebrate, they got married.”