MB Caschetta: On Her New Novel ‘Miracle Girls,’ Being an Early Member of ACT UP, and Writing as Redemption

MB Caschetta: On Her New Novel ‘Miracle Girls,’ Being an Early Member of ACT UP, and Writing as Redemption 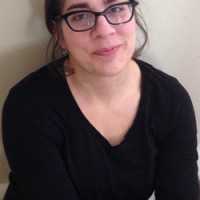 MB Caschetta’s new novel Miracle Girls is a book about missing girls, faith and God, and “God’s chosen people,” she says, “who are, of course, the gays.”

Set in 1973, the book details the inexplicable disappearance of a group of children from a small upstate New York town:

[…]children are mysteriously disappearing from the region in record numbers. Ten-year-old Cee-Cee Bianco inadvertently becomes involved in the town’s mystery when she performs a “miracle” after a traumatic event takes place in the woods behind her house. Witnesses believe she’s a saint or a freak. When Cee-Cee gets help from her teachers, an order of radical nuns who will stop at nothing to end the Vietnam War, the town’s mystery and Cee-Cee’s true identity are revealed.

The Kirkus Review claims Miracle Girls is full of “dark poetry and the menace of ordinary evils.” I love the novel, which is being published in November 2014 by Engine Books.

Mary Beth and I have been writing together for years in the same writing groups. We got together over coffee at my kitchen table on a rainy October morning to talk about her new book and the writing life.

Do you think your novel is dark?

Well, it’s certainly gritty. I’ve never been afraid to look hard things in the eye, which has generally worked in my favor once I left home, where they kind of just wanted me to shut up. There were some rejections along the way that claimed the book was too dark, but then the review in Kirkus. Vindication! That, and the fact that the reviewer called Miracle Girls a “polished debut novel,” was also sweet. (Kirkus–a review publication aimed at librarians–can be tough.) “Dark poetry,” I love that. And yet it does always take me aback for a second when someone points out the darkness of my writing. To me, this novel has so much light and redemption in it. Writing the book has been a great light in my life. But maybe that’s only because I’m used to the dark. I hope other people see its brightness. I always wanted to write things that made people feel hopeful.

What sustains your writing? What made you want to write this particular novel?

This is a book I had to write. I didn’t have a choice. Believe me, I tried not to write it. And then it did that thing that novels do and turned into a thing unto itself. I was really surprised that it turned out to be a book about my own faith, in a way, and my own gayness, and in some metaphorical way, my childhood. It’s a once in a lifetime experience, I think, to write a book that comes from that deep inside yourself. Who knew that I’d look deep inside and find nuns there!

So what’s with you and this inner nun-thing?

You were raised Catholic, Sally; don’t tell me you are free of your inner nun (laughing)! Oh, I don’t know. It was always my fantasy to live with a group of women in silence and to share a fervent passion, I guess. It seems peaceful and meaningful. Instead, I became a lesbian. So, of course, the Sisters in Miracle Girls are radical bad-asses, which also seems peaceful and meaningful in a whole different way. They save girls and keep secrets. I guess with this novel, I wanted to write a new religious perspective of gays and lesbians for the world, especially gay and lesbian kids, a narrative in which our community’s kids get to be the chosen ones and loved by God most of all by virtue of who they are, and how special they are.

Are you a practicing Catholic?

I don’t know what I am! I guess that’s why I wrote this novel, and why it took fifteen years. I am some weird hybrid, the sum of all my spiritual experiences, which, yes, started with a heavy dose of Roman Catholicism, Italian-American style, to be sure. I have a spiritual life and a spiritual practice these days, and I surprisingly have a lot of faith for someone who has seen the dark side of things. Oh, but I am a practicing lesbian, in case you were wondering. I practice a lot. And I’m starting to get good at it, if I do say so myself.

You have an interesting background as an activist and writer. Are you willing to share a bit of your history with ACT UP?

Yeah, you know, in one version of Miracle Girls, the gay brother ends up in New York City in the late 1980s–which is when I got there, directly after graduating from Vassar College. But the novel that once spanned the course of the protagonist’s life now spans only three months in her childhood. Such is the way with novels, I guess; or at least with my novel. It was a difficult time; no one knew what to do. We marched and protested and organized, and people, so many people, died. I watched the excellent David France documentary How to Survive a Plague, and there was a little clip of young early-twenty-something me talking into a microphone at an ACT UP meeting at the Gay and Lesbian Community Center on 13th Street in New York City. I would have sworn that I never said a word on the floor of ACT UP, but there was the proof in living color. I always think of myself as a kind of background member of the group. I worked for Gay Men’s Health Crisis and ended up editing Treatment Issues. I was at the AIDS conference when David Ho announced that AIDS would soon become a chronic disease. I didn’t believe it, though. In fact, no one did; not at first. We were too exhausted to hope. But it did turn out to be true, so I stand corrected. I eventually got a degree in Liberal Studies at the City University of New York, where you could concentrate in Medical Sociology. That’s how I became a medical writer, which is how I support my novel writing habit.

You came out in the Wall Street Journal?

Yes! I was working part time as a staff member at the Fund For Human Dignity, coordinating the AIDS hotline there, when the board members wanted to hire the first straight executive director. Despite the name Fund for Human Dignity, it was a very gay organization, actually it was an educational and off-shoot of the National Gay and Lesbian Task Force. The staff staged a walk out, and the board members changed the locks! Man, those were the days. It was not exactly a good time to hire non-members to run a membership organization, as I said to the reporter of the Wall Street Journal who called me for a statement. It all just kind of happened.

Tell us about medical writing.

No, it’s too boring. I mean I’m not generally bored by it. I think medicine is kind of fascinating, as is all the dynamics in the healthcare system right now. But I just kind of fell into it and weirdly had this knack for filtering medical data and knowing how to tell it as a story. I’ve written about most disease states and a whole lot of drugs. Lately it’s been a lot of oncology. But I’d much rather talk about my fiction writing.

Congratulations on celebrating your 10th wedding anniversary. Your wife is also a writer. What are the benefits and challenges of having two writers in the house?

I always thought two writers together was a bad idea. So, did Meryl. But we fell in love. Actually we fell in love with each other’s writing first. We had a good thing going, and so we got married. It happened to be on the first day it was possible in the United States of America, historic moment and all. Isn’t that weird? Odd that we were even living in Massachusetts then—in Provincetown. What a fun day that was. And, yeah, we were the first officially married lesbians in the New York Times with four other couples. So, that was also a bit unexpected. And now it’s been ten years! But, anyway, at our house, it’s all about writing. We have writing groups, shared and separate, that meet at our house. And there is a lot of tandem time spent together with laptops open. There is also a lot of swapping writing, reading work out loud, and offering encouragement and criticism. That last little bit is tricky sometimes. I am more tactful and encouraging with my criticism, but I bet Meryl thinks the same thing about herself! You have to have a sense of humor about the whole thing. Neither of us takes herself very seriously. Our work–we take seriously, and each other’s work too. But not ourselves.

I read your New York Times “Modern Love” article about being disinherited. It was very moving and sad. Are you still working on a book about it?

I am. It’s a tough topic for me. I’m still trying to sort it out and understand why it happened? My family is against my writing about it, though. So that adds an extra layer of difficulty. But I think it’s an important topic, and I think it is especially relevant in the gay community, so I am plugging away at it. I guess I’m a slower writer than I want to be! I started my first book, which was the short story collection titled Lucy on the West Coast And Other Lesbian Short Fiction (Alyson, 1996), in college and finished it when I was 28 years old. Miracle Girls is coming out on November 11th, 2014, which is nearly 2 decades later. Who knows when Disinherited: A Memoir will be done. But I’m running out of time!

Did you always want to write?

Always. It’s, like, the only thing I really have going for me.

That’s not true! You have other talents.

Okay, I can cook. A little.

Tell us about Engine Books Press. How did you and your publisher find each other?

I’ve heard a lot of people say lately that the most interesting literary books are being published by small literary presses. I think Engine Books is an amazing example of this phenomenon. They publish 4 books a year, and they are very fine books, too. I had sent Miracle Girls in to their annual novel contest, which awards the winning author $1,000 and a publishing contract. I didn’t win it (laughing). But a few months later, Victoria Barrett, the publisher, sent me an email saying she couldn’t stop thinking about my characters and she was thinking maybe she should publish it. I agreed that she should! It’s been an amazing process and a true collaboration. You can buy a limited-edition debut novel hardcover at the Engine Books website. You never know; maybe someday it’ll be a collector’s item!

‘Olive Oil and White Bread’ by Georgia Beers
Cameron Awkward-Rich: On Engaging with Trans Literary Tropes and Writing for the Future
'Heartsnare: Book One of the Umbraverse' by Steven B. Williams