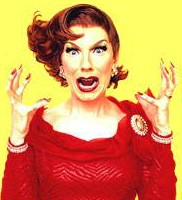 John Epperson, 59, creator of the legendary stage character Lypsinka, is also an actor, pianist, vocalist and writer. His meticulously edited, show-length soundtracks of expertly lip-synched snippets of outrageous 20th-century female performances forms his brand. After nine years away from the footlights, he’s back with a trilogy of plays running at the Connelly Theatre in New York City until Jan. 3, 2015.

A Southern boy from Hazlehurst, Mississippi, he moved to NYC in 1978 where he became a rehearsal pianist for the American Ballet Theatre. There he began doing drag performances at iconic night spots such as Club 57 and the Pyramid Club.

You’re back with a trilogy–two revivals and one new piece–Lypsinka! The Boxed Set, The Passion of the Crawford, and John Epperson: Show Trash, in which you play yourself.

It’s the New York premiere of Show Trash. The other two shows, performed as Lypsinka, are revivals of shows that have been previously presented Off-Broadway–the most recent being The Passion of the Crawford in 2005.

Your career has been like one big choreographed dance. Wigstock, fashion shows, performing at downtown venues….

I think I went to the last Wigstock. I did not perform. As I was leaving I heard someone performing to Dolores Gray, a big influence on me…

Dolores Gray was a singer, actress whose first big shot at success was Annie Get Your Gun in London’s West End in the late 40s. Ethel Merman chose not to do Annie in London, produced, by Rodgers and Hammerstein. They auditioned Gray and she became a big star in London. She told me that when the movie was being filmed with Judy Garland and she couldn’t get through it, MGM had to replace her with Gray. One of the producers, I don’t think it was Rodgers or Hammerstein, wouldn’t let Gray out of the contract. She went to see Annie “and there was Betty Hutton doing my movie. I cried real tears,” she told me. As soon as Gray was free, MGM did a screen test that Vincent Minnelli directed himself. They gave her a contract, she made four MGM movies. She was a real pistol. I have more stories to tell about my dealings with her in Show Trash, that I won’t give away here.

Do you feel vulnerable doing Show Trash since it’s more your voice, your life, than when performing the two other pieces?

I do. I tell the audience it’s about my vulnerability, so that sort of eases things right there.

I did have another show in which I performed as myself called An Evening with Lypsinka’s Maid, which I performed at Birdland in New York City. I didn’t hide in a dressing room while the audience was coming in. I was there greeting them which relaxed me a lot, I was already interacting with them.

Yes. I wasn’t suddenly this entity who appears on stage. You learn how to play a version of yourself, so it’s still like playing another character, trying to be myself. But also I’ve got my defenses up, so I’m playing a version of myself at the same time.

You mean “doing” our best imitations of ourselves?

We all have different facets of ourselves that we show to different people depending on how well we know them.

So, paid actors or not–we all have an on stage and a backstage?

I think so. What was that old TV commercial about “Don’t let them see you sweat”?  Isn’t that what’s that about?

You lip sync. Why do you pay so much attention to voice lessons?

Well, in Show Trash I’m singing, so that’s what the voice lessons are for.

With lip syncing, do you use your own voice while rehearsing, are you trying to line up a recorded snippet with your voice?

No, I don’t use my own voice at all. I try to make no sound at all. Sometimes I don’t concentrate hard enough and you might hear the P sound or the S sound.

As you’re using your own muscles and mouth and…

Right, but trying not to use the vocal cords.

You do use your piano skills. Are you back with American Ballet Theater?

I work there only on a part-time basis, and right now right this very second I’m on a leave of absence from them entirely. No part-time. Because there’s too much to do. I’ve got to be here talking to you. I can’t be over there.

But you were there, places readers would want to be. You hung out at some of Liza Minnelli’s parties. What were her get-togethers like?

So much fun! One night the electricity went out so she just put candles everywhere which created a whole different mood, a very low-key mood. Otherwise, it was just showbiz pizzazz. There was a grand piano, always someone there to play it, always someone there to sing. She had color photographs that Roddy McDowall had taken of her and her mother, Judy Garland, when Liza was on Judy’s TV show. One night Robert Wells was there. He wrote Chestnuts Roasting on an Open Fire. Madonna was there one night. It was the place to be for about six weeks.

You have met several famed New Yorkers—including Elaine Stritch. Can you tell us a little bit about Stritch?

I’ve heard people say that the best relationship to have with Elaine is across the footlights, but in my own dealings with Elaine she was very nice. She came to see a show I did at the Minetta Lane Theater in 2003. You couldn’t not know she was there because she was in all white from head to toe, white hat, white hair, white skin, with a man who I knew. We all went to dinner afterwards. Elaine was great fun telling all of her stories. Every time I’ve seen her since then she’s always pleasant and fun.

The New Yorker included you in a story about VIP living rooms. Did you change anything in about your  apartment before they came in to do the piece?

I didn’t change much. I remember telling Ingrid Sischy, who was at that time the editor of Interview, I told her they’re coming to photograph my apartment and I’ve been traveling so much and I’ve got suitcases in the middle of the living room. I asked her should I put them away or just leave them sitting out there?  “Ah, just leave them there,” Sischy said. Then the photographs came out and I did indeed have the most humble apartment. I’m not saying that bragging. I wish it was bigger and nicer, but home decor doesn’t interest me that much. A lot of things do, but not home decor.

For modeling, arts, cosmetics, you are approached for assignments to help with branding. What do you think they’re thinking with “Let’s get Lypsinka”?

I guess they’re thinking how can we do this so it’s not the usual. In the case of Thierry Mugler having me in his fashion show, he was already pushing the envelope by having unusual people in his show. He likes showbiz. I think he was imagining that he wanted a good show so maybe I should have this guy, Lypsinka. Get people talking. Let’s put a man in a dress.

About buzz, who is your audience today beyond the obvious people of my generation?

Well, tickets are being purchased but I don’t know the demographics. One of our goals is to get younger people to come. It’s been nine years so we practically have a whole new generation.

I know in Brooklyn there’s this whole drag scene that’s happening. I’m hoping that they’re going to come and see, asking “Who is this guy? We’ve heard about him. We’ve seen him on YouTube, The Joan Rivers Show.” I know it was important for me to see Charles Pierce or Charles Ludlam. I hope they see me in the same way.

The Connelly Theatre is right around the corner from the Pyramid Club where I used to perform. Then there was Club 57 that I talk about in Show Trash.  Before I started to perform in those clubs, I would go to Christopher Street for Halloween. I’d take a boom box and lip synch on the street, drawing a big crowd. That’s really when I started thinking, “Hmm, maybe there’s something to this” but that’s only one night a year. Then Club 57 closed and I disappeared from the East Village performing scene. I was working at American Ballet Theater and it was a full-time job and it meant traveling, often for months at a time. There was a guy, you may know his name, he called himself John Sex. Does that name mean anything to you?

John Sex–singer, performer, dancer, performing with a python snake and his singers The Bodacious TaTa’s.

He was a fixture at Club 57. He saw me on the street one day and asked, “Why aren’t you performing? You should be doing something. Do you ever go to the Pyramid Club?” I told him I’d heard of it, of course, but never been. He said, “I’m doing a show there this weekend. Why don’t you come?” He introduced me to the people who were running the club and encouraged them to book me. At that time Sunday night was the Pyramid’s big gay night. I did a 20-minute performance and just couldn’t do anything wrong. They loved it! I soon realized that this scene was the 80s equivalent of the Continental Baths phenomena–when Bette Midler sang for men in towels and Barry Manilow was her piano accompanist. That was their springboard.

The Pyramid Club is still open.

I haven’t set foot in it for twenty years.

With Pyramid Club around the corner from the Connelly Theater, will you wander back one night?

You’d think that they would invite us to come and do some kind of promotional thing there, but maybe they haven’t put two and two together yet.

The management may not know the history.

They may not know, but here’s a funny story. My youngest niece is studying acting at Webster University (St. Louis). When she was in high school, she had a friend who’s now studying theater at Fordham University here in New York City. When they were in high school in Jackson, Mississippi, they were cast in a production of Rent, which mentions the Pyramid Club. They were encouraged to research all the places mentioned in the play. On the Internet he typed in Pyramid Club and he saw the names Hapi Phace, Tabboo!, Lady Bunny, RuPaul, Lypsinka. Later, he’s telling my niece about this club and she mentioned, “Oh, my crazy uncle gets in a dress and calls himself Lypsinka.” Now he’s going to school here. So younger people do know about the Pyramid Club. I’m told that the younger generation is totally fascinated by the whole East Village, Pyramid Club, Club 57….

Mudd Club…they are totally fascinated by that scene the way I was fascinated when I was a kid by the whole Warhol scene. That’s one of the things that made me want to move to New York. I wanted to rub elbows with Andy Warhol.

Mattilda Bernstein Sycamore on Navigating the 90s Club Scene
Eileen Myles on Making Art and Engaging with Technology
Tim Dlugos, "After a Line by Ted Berrigan"