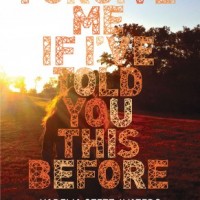 Filled with tender moments and a remarkable family, Karelia Stetz-Waters’ YA novel Forgive Me If I’ve Told You This Before (Ooligan Press) is a queer coming of age story set against the political landscape of rural Oregon in 1992. What’s timeless about this novel is the familiar teenage struggle to find love, acceptance, and oneself. The story opens with Triinu and her best friend Isabel dealing with the aftermath of an incident at Christian summer camp, where an older camper has come onto Triinu, who then stabbed him with a pen. From the start, it’s clear that Triinu’s world includes adults who do not have her best interest at heart, like the sinister Principal Pinn, who dismisses death threats and belittles Triinu, leading to a dramatic confrontation by the story’s end. The violent language and sexual harassment Triinu experiences at school are raw and explicit, far from the land of after-school specials and textbook examples of bullying. When escape offers itself by way of cigarette-bumming Pru Ann, Triinu quickly abandons Isabel to hang out with the punks in the smoking yard. Soon after, she adopts a goth look and pretends to care about Pru Ann’s accelerated agenda for them to both lose their virginity.

Antidote to the smokers and the bullies are Triinu’s parents, a pair of loving, Estonian immigrants who recite Auden to one another, creating a household made of literature and poetry. It’s always refreshing in a YA novel to have parent figures who are not the enemy, but are rather nuanced, supportive adults. They serve as a touchstone for Triinu as her high school years unfold.

True to adolescence, although at times hard to keep up with, Triinu’s life is populated by a full cast of characters. After abandoning Isabel for Pru Ann, Pru Ann is sent away after her parents catch her smoking, and gone, too, are the awkward older boys Pru Ann had culled as boyfriend for her and Triinu. There’s Ursula, a girl from church camp that Triinu connects with, immediately drawn to Ursula’s warmth and boldness. There’s Deirdre, the goth senior who heckles Triinu’s worst bully, Pip Weston, enchanting Triinu with her cool disregard for authority. There’s Chloe, the corset-wearing friend Ursula complains about but who proves to be ultimately kind just when Triinu needs an ally. There’s Ava, the British pen pal of Chloe’s who appears one fateful night. Any narrative that spans a few years of high school will seem epic in the heart of the narrator, and Triinu’s story is no different. She fixates upon Ursula, who Triinu quickly falls in love with, then agonizes over when and how to tell her, as Ursula prepares for a year abroad in France. It’s a love that seems to seize Triinu, but in the confusion of first queer crushes, who could blame her?

Parallel to Triinu’s own self-discovery is the growing presence of the Oregon Citizens Alliance, an organization that wants to make it “illegal to be gay.” Part of Ursula’s charm is her supposive interest in the debate, and several scenes revolve around the political unrest and homophobia the organization provokes. Ursula and Triinu smoke pot in a park one day and discuss the ballot measure, while Triinu worries about when to kiss her:

I didn’t want to talk about politics. I wanted Ursula to lie down beside me, take my hand and clasp it to her chest. In my daydreams she said, “Oh, Triinu, I can’t bear to leave you. I’m staying in Oregon. Is that wrong?” In real life, she asked, “Have you heard of Bowers v. Hardwick?”

“Michael Hardwick was this gay guy. He was going down on a guy in his own bedroom. The cops came in and arrested him because gay sex is illegal in georgia.”

“Yes, still! Right now. And the OCA wants to make it illegal in Oregon too.”

It’s heartbreaking to watch a queer teenager try to come out amongst so much hostility and anti-gay rhetoric. While Ursula proves to be more shallow than bold, Triinu befriends Chloe and Aaron, who take her to a gay dance club and introduce her to Ava. There are those aching moments that many readers will identify with—the thrill of seeing other queer people for the first time, as well as the relief of a repaired friendship. Isabel re-enters Triinu’s life, handing her a flyer for her band’s show like an olive branch. There’s a moving scene where Triinu sees Isabel perform, and can recognize how her childhood friend has grown into herself as Triinu does the same. Ursula returns from France, and the fissure between she and Triinu deepens, confused by hurt feelings and poor choices, until Triinu has enough confidence to put Ursula in her place.

Covering four years of high school, the novel takes some time to pick up speed, so that the most rewarding chapters happen around Triinu’s senior year, where the promise of college hangs on the horizon, she stands up for herself in more than one arena, and the Oregon Citizens Alliance’s campaign comes to a head. The novel includes an ambitious mix of politics, first loves, lost friends, family, grief, cultural heritage, and identity. Readers will be rewarded with a thoughtful narrator, whose bravery shines brighter with every page, and a touching portrait of family and true friends, who shower Triinu’s bravery with love.