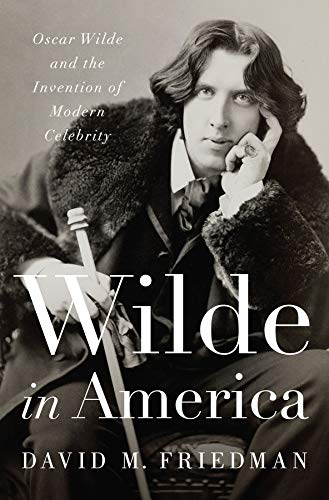 ‘Wilde in America: Oscar Wilde and the Invention of Modern Celebrity’ by David M. Friedman

‘Wilde in America: Oscar Wilde and the Invention of Modern Celebrity’ by David M. Friedman

In late 1881, Oscar Wilde, then twenty-seven, embarked for New York to begin a lecture tour covering thirty states and fifteen thousand miles. Over the next ten months the American press would publish nearly five hundred pieces about him, making him the most famous Briton in the United States with the exception of Queen Victoria. This happened despite the fact that thus far his published work was limited to a slim volume of negligible verse which sold poorly. Following his trip, he regaled British audiences with a talk he titled Impressions of America, that featured such now-familiar remarks as this on Niagara Falls: “Every American bride is taken there, and the sight…must be one of the earliest, if not the keenest, disappointments in American married life.”

What is less well-known, and serves as the subject of David Friedman’s entertaining new book, is Wilde’s unprecedented feat of self-promotion during his American lecture tour. Gilbert and Sullivan’s Patience had opened in London in April of 1881, featuring the character of Reginald Bunthorne, a languid foppish aesthete modeled on Wilde who was by then a fixture in London society. That September, when the operetta began its American run in New York, its producer Richard D’Oyly Carte worried that US audiences would miss the jokes about British aesthetes, and was advised to send Oscar Wilde over, portraying himself “as a real-life Bunthorne, a role fashioned by Gilbert to make Wilde and all aesthetes appear fools.” Colonel W.F. Morse, Carte’s New York business manager, cabled Wilde, implying, entirely falsely, as it happened, that booking agents throughout America were eager to engage him as a speaker on the Aesthetic Movement, and offering him half the gate receipts from an all-expenses paid fifty-lecture tour. Despite knowing he would be lampooning himself, Wilde couldn’t resist the money and the chance to spread his fame overseas and on Christmas Eve he boarded the SS Arizona.

The book’s central thesis is that our modern-day cult of celebrity, in the Kardashian sense of  unaccomplished people famous for being famous, had its beginnings in Wilde’s American tour. Over eight chapters, titled with axioms of self-aggrandizement, (“Build Your Brand,” “Work the Room,” “Celebrity is Contagious,” etc.) Friedman argues his case unassailably, using well-chosen examples of Wilde’s genius for self-promotion. Among the most winning aspects of Wilde in America is its structure. While tracing Wilde’s journey across the United States and back, Friedman shrewdly avoids letting his account devolve into a mind-numbing blur of the many cities and towns he visited by overlaying the narrative with a grid of topics he examines in fascinating detail. Chapter Three, “Strike a Pose,” concerns Wilde’s visit to the New York studio of the celebrated portrait photographer Napoleon Sarony, where he posed for twenty-seven portraits. The now-familiar images from this session would be used not only for publicity, but also on trade cards advertising “products ranging from cigars to kitchen stoves.” An image of Wilde even wound up promoting “Mme Marie Fontaine’s Bosom Beautifier for Beautifying & Enlarging The Bust.’”

The chapter which follows, “Celebrity is Contagious,” offers lively accounts of Wilde’s East Coast meetings with such literary lions as Oliver Wendell Holmes, Julia Ward Howe, Ralph Waldo Emerson, Walt Whitman and Henry James. Whitman, himself singularly adept at publicity, posed for over one hundred portraits during his lifetime, including the iconic frontispiece to his 1855 masterpiece, Leaves of Grass. Among his lessons to Wilde was the notion that “fame as a literary man is only partly about literature; it is also, maybe even mostly, about committing oneself to a public performance.” Henry James, who shunned publicity, disliked Wilde on sight, calling him ‘an unclean beast’ in a letter to Clover Adams. “When James looked at Wilde, he saw a repugnant and alien future: an age when the talent that mattered most wasn’t artistic but narcissistic–a genius for self-puffery and public preening.” Over a century later, introverted writers wince at being forced to market themselves by building their brands on social media. As Friedman draws connections between Wilde’s tour and our world of celebrity worship, what might have been merely an amusing series of nineteenth-century anecdotes takes on a compelling relevance for the modern-day reader.

It is hardly surprising that Wilde’s tour had its greatest successes in the port cities of New York and San Francisco, although there were detractors in the press even on the coasts. After Wilde’s lecture at Platt’s Hall in San Francisco, Ambrose Bierce, who hadn’t even bothered to attend, wrote in The Wasp, “ ‘That sovereign of insufferables, Oscar Wilde…has mounted his hind legs and blown crass vapidities through the bowel of his neck, to the capital edification of circumjacent fools.’ ”

But Wilde knew that even bad reviews made for good publicity, and shrugged off the bemusement of his audiences in the Midwest. One of the funniest chapters describes his visit to the Matchless Silver Mine in Leadville, Colorado, where an ore bucket lowered him into the mine shaft. There he drank whisky with the miners until dawn, telling them about the Renaissance silversmith Benvenuto Cellini. “[…] ‘I was reproached by my hearers for not having brought him with me. I explained that he had been dead for some little time which elicited the enquiry, “Who shot him?”’ […]”

Friedman concludes with an Epilogue chapter, “Don’t Believe the Hype,” summarizing the remaining years of Wilde’s life after his return to England. He suggests, convincingly, that sheer hubris lay behind Wilde’s disastrous decision to sue the Marquess of Queensberry. “Wilde thought he was too famous to fall–which is precisely why he did. After his successful performance as an aesthete in America, and his ascension as a playwright in London, he approached his appearances in the witness box as one more ‘star turn’–another chance to lecture those less sophisticated than he.” While we cannot, at this distance, know for certain what Wilde was thinking, Friedman’s analysis is certainly persuasive, and makes a fitting, if saddening, capstone to an extremely engaging well-researched book.

'Ask the Passengers' by A.S. King
'The Art of Jaime Hernandez' by Todd Hignite; Intro by Alison Bechdel
Five New Queer Voices To Watch Out For