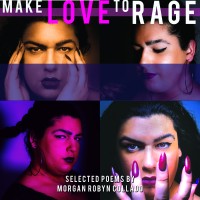 Rage / Making / Love. Trans, working-class, femme Columbian-Puerto Rican poet Morgan Robyn Collado splits her debut collection, Make Love to Rage, into these three sections that, when read alongside the book’s title, prompt essential questions: How does one “make love to rage,” how does one embrace their righteous furor at the injustices of  the world and turn it something new, rather than simply explode or burn out? And how can we imagine “rage making love”–anger begetting healing?

Collado’s poetry works to answer these questions and, in and of itself, is part of the answers to these questions. Her fiery, cutting, damning poetry is both an observation on how generations of colonized peoples have remained alive and resistant, and an illustration of how storytelling is integral to this process.

In the collection’s first poem, “The Ceiba Tree,” the female speaker talks to a Mother Tree about Her centuries–old memories of colonization and slavery. Ultimately, the tree shares that “insanity is the only appropriate response to genocide / but the Sun Still Rises.” This wise-woman voice reverberates throughout the rest of the book, and Her message is clearly heeded. One must go “insane”–which, for women, often means simply expressing their anger or refusing to be silent — to cope with systematic erasure. Yet, one must also keep in mind to not self-destruct, for future generations await, and they need strong roots. This is a tentative, skillful balance that Collado wants us to see is disproportionately foisted not just on women as a monolithic group, but on women of color and working class women in particular.

“The Ceiba Tree” sets the tone and illustrates the simple, forceful poetic elements that will remain in each of Collado’s following poems — a reality that may make this collection feel repetitive to some (save, it should be noted, a shift to a somewhat lighter tone during the final, shorter “Love” section), but which, at least for this reader, worked to build emotional momentum. The experience is not unlike a briefer version of reading the escalating passion and fury of Gloria Anzaldua in Borderlands / La Frontera.

One of these elements of particular note is the constant sound of women talking to other women. Many of Collado’s poems feel like women-centric spaces that the reader, should they happen to not be female-identified, may feel intrusive of, or, alternately, privileged to silently witness. It’s an important reversal of the often unspoken understanding that the spaces within a piece of literature are male-centric. Not that the conversation between Collado’s women is always harmonious; for instance, in the book’s second poem, “Girlhood Trapped,” the speaker listens to the lost dreams of non-white female prison inmates while stewing about the motivations of their guard, who is also a woman of color.

The female prisoners are survivors (albeit compromised ones) of a system set up to destroy them. Similarly, Collado gives voice to the stories of sex workers (“The Stroll”), youth of color (“Remember Trayvon”), immigrants forced to assimilate (“Palabras,” “Mi Madre”), the female targets of physical violence (“Gifts of Failure”) and trans women who are pressured to feel less-than-whole (“Whole/Pieces”). Make Love to Rage highlights the resonances and dissonances among diverse groups of people thrown together in a struggle against being extinguished by oppression, and encourages a deep, constructive, heartachingly upfront examination of the patriarchal and colonial roots of current social inequalities.

A Poem by Helen Hofling
Old Friends Help The New York Review of Books Celebrate 50 Years
'Waiting Up for the End of the World: Conspiracies' by Elizabeth J. Colen