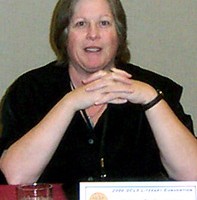 Some people are funny. Most people are not. Those of us who are, and who find humor essential to managing life’s many hills and valleys appreciate other funny people. A lot. Humor breathes life into our days, whether we realize it or not.

Cate Culpepper was funny. And she breathed life into all around her. She didn’t write humor–she wrote horror and fantasy–but she was, as a person, funny. That humor put her in a special category for me as a reader, for me as a lesbian, for me as someone battling terminal illness, as she did until Oct. 25, when she succumbed.

In January when Culpepper’s most recent, and sadly, last book, Windigo Thrall, was released from Bold Strokes Books, Culpepper wrote a blog post for Bold Strokes Books about horror and Windigo Thrall. As she detailed growing up in New Mexico, land of the brilliant white desert light that lured Georgia O’Keeffe from New York, Culpepper explained how she would regale her amigas with horror stories in the bathroom of her childhood home.

Why the bathroom? Because it was windowless and as such was the only place she and her friends knew that was completely dark, totally shutting out that light, creating a creep-zone for scary tale-telling, which she liked to do with the classic single candle to add atmosphere, sending her friends shrieking into each others’ arms. Perfect for a budding lesbian..

You can just see it, can’t you? A group of eighth graders huddled around Culpepper as she alternately whispered and raised her voice, the better to chill her amigas with her storytelling.

Yet Culpepper explains she really isn’t the scariest writer out there. And injects her characteristic humor:

I’ve always considered my stories more romantic than sinister. Creepiness is much enhanced if you genuinely care for the women being creeped upon. If they don’t vanish forever into some spectral hell, you want them to end up together. I focus a lot on the anxieties and joys of first love and growing passion—I just have one of the women trying to eat the other, is all.

Yeah– funny. She continues: “Not the fun eat. Eat as in bite, chew, chew, swallow, burp, bite some more. In Windigo Thrall, Jo Call chases her beloved, Becca Healy, all over Mount Rainier, trying to eat her up. Yep, bet I lost a few romance readers right there.”

But gained other readers, no doubt. Readers who appreciated the breadth of Culpepper’s writerly sensibilities. And her irreverence.

That humor and irreverence were on display in a farewell video she made for YouTube which was posted after her death Oct. 25. One did not have to know her to laugh and also cry after watching it–but one certainly knew her better after viewing it. Her smiling face, her sturdy body against the backdrop of the Pacific Ocean–seemingly undaunted and seemingly undauntable. How could she have been felled? And only a few months after she turned 57? From the adorable revision of the MGM lion, starring her beloved dog Kirby to the photo of her urn (“Cate in a can”–which is depicted as Folger’s classic roast wearing a hat and sunglasses, with a cigarette attached) to her comments about her life and friends to a final quote from Walt Whitman while a montage of her walking on the beach with Kirby fades into a sunset, it is a brief camera obscura of a life well-lived.

In addition to her writing, Culpepper was a social worker, supervising a housing program, ISIS House, for young, homeless LGBT in Seattle through YouthCare. (You can listen to an interview with Culpepper on The Liz McMullen Show where she discusses issues of gender and mental health and homelessness here.)

Her heart was big–and warmed many. As her farewell video makes clear, Cate Culpepper loved and was loved in return.

Culpepper’s writing career was longer than her association with Bold Strokes Books. She had peddled her writing to Naiad Press in the 1980s, but was not accepted for publication. But she kept at it and won a short story contest which propelled her publications forward. She also began writing lesbian fan fiction years ago, with Xena, Warrior Princess as her focus. Her Tristaine series both pre-dated and expanded from there.

Although she grew up a “desert brat” in New Mexico and often noted she’d had an idyllic childhood there, she moved to the Pacific Northwest 20 years ago and never looked back. In a 2010 interview with Jove Belle, Culpepper explained how the “moss and mold” of the old forests an hour’s drive outside Seattle conjured for her the place where the Tristaine series was set.

That wry humor intact, she told Jove Belle, “I’m an unapologetic sap for idyllic forest settings–perhaps because I grew up in a desert valley. Sitting around with hot women in a sun-dappled, leafy grove? Please. Who could not like?”

In her farewell video there is no mention of Culpepper’s books, just of how lucky she was and what a great life she had. (Watch it here, but do have a hankie on hand—it’s impossible not to weep.) But in the interview with Jove Belle one comment Culpepper makes reveals the overlap:

I people my stories with the kind of women I hope to have in my life. My characters have helped me define what I’m looking for in relationships. The friends I value most have the courage of the Amazons in the Tristaine novels, and the passion and kindness of those in Fireside and River Walker. I believe writers create that emotional resonance when their characters reflect their bonds with those they love.

Yet while her books did not feature in Culpepper’s farewell, they were part of why she was beloved–she had a strong lesbian fan base and her readers always wanted more.

Over the past 14 years Culpepper published eight books with Bold Strokes Books. She’s won all the important LGBT literary awards: a Lambda Literary Award, three Golden Crown Literary Society Awards, a Rainbow Award and the Alice B. Toklas Award for her body of work.

That novel, more than any other, was pure Culpepper: As the jacket copy declares,

Any night La Llorona walks the river is a night to stay indoors. One moonlit midnight, two very different women meet on the banks of the muddy Rio Grande. Grady Wrenn is a cultural anthropologist, enthralled by a local ghost story about a vengeful spirit known as the River Walker. Elena Montalvo, a spiritual healer, is that tortured spirit’s only defender. Together, Grady and Elena must find a way to end the River Walker’s murderous vendetta— and overcome a maze of cultural barriers to find each other.

Overcoming cultural barriers. Finding each other.

These things were at the heart of both Culpepper’s work and her own personal politic. She was a lesbian through and through–she adored women, she believed in women, she found her strength in women. In her books, whether in the Tristaine series about a modern-day Amazon clan which is infused with the breadth of lesbian sensibilities or in her four other speculative fiction novels, the last two of which paired Dr. Joanne Call and Becca Healy in A Question of Ghosts and Windigo Thrall, Culpepper focused on what connects women to each other–across class, race, ethnicity and even worlds.

And she wanted to see that happening in our own community. In February 2014 she told the Seattle Mystery Bookshop that if there were one thing she could change it would be to “make lesbian fiction more accessible and welcoming to women of color. While there are wonderful authors out there representing different races and ethnicities, we haven’t made enough inroads in terms of diversity to ensure all our readers see their lives reflected honestly in our books. Our main characters (mine included) skew toward white, young, able-bodied women, and our community holds a great deal more variety and nuance. How can we let more diverse voices speak out, those of both writers and readers?”

Culpepper’s work employed fantasy and mythmaking as lesbian feminist archetypes. It was both the foundation of her work and its coda: She wound female-centric mythology into the lives of real women, drawing her readers into a world in which women lived for each other, a lesbian world where women saved each other.

Just last month Culpepper celebrated the one year anniversary of The Storyfire, a public forum created by fans, for readers who obsessed with her Tristaine series. Thousands of posts over that year underscored how important the series was to readers. Yet Culpepper was never blasé, never jaded by her success, always as appreciative of her fans as she was of her friends.

Last December she posted this simple message to her readers “Hello to all my sistren, brethren and othren–It’s another of those favorite days of authors–Windigo Thrall just arrived on my doorstep. I’m sitting here with the Yule Log crackling on my teevee, egg nog in my belly, my dog asleep on my left foot, and my latest book in my lap. Yes, I’m describing heaven on earth. Wishing all my nearest and dearest a wonderful holiday season –Cate”

It will be a less joyful holiday season this year without Cate Culpepper. But her books, stories, videos and musings live on. As does the memory of her indefatigable spirit.

Sex Talks to Girls: Maureen Seaton
‘The New Old Me: My Late-Life Reinvention’ by Meredith Maran
'The Gay Revolution: The Story of the Struggle' by Lillian Faderman