‘Travels with Casey’ by Benoit Denizet-Lewis

‘Travels with Casey’ by Benoit Denizet-Lewis 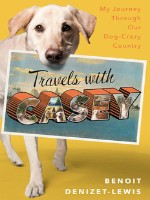 It’s a strange thing. We never really know what our pets are feeling, and yet we’re so often convinced they either love us or hate us. Consider Benoit Denizet-Lewis, author and owner of a nine-year-old Labrador-Golden Retriever mix. “Casey’s really good at looking miserable,” Denizet-Lewis complains to his psychoanalyst. He hopes his upcoming cross-country road trip with the dog, for a new book called Travels with Casey, will give them a chance to bond.

And while Casey certainly does have a starring role, Denizet-Lewis is wrong about the other difference, because as it turns out, “the story of America’s dogs” is also “the story of America’s soul,” and like any good journalist, Denizet-Lewis interviews a wide range of people to get to the heart of it—everyone from his old middle school English teacher, who has now become a doggie masseur; a woman who was taken to court over dog poop; and Cesar Millan, famed dog whisperer, to name but a few. The author doesn’t spend a lot of time writing about any one person, nor does he need to, for he has a knack of summing up an entire personality in a small space. Here, for example, is one particularly memorable moment, between the author and a just-released mental patient he encounters at a dog run:

“‘Do you have a girlfriend?’ she asked.

“‘I’m gay, actually,’ I replied. I could imagine a guy offering her a similar answer even if he wasn’t gay, but in my case it happened to be true.

“She cocked her head slightly to the side and squinted her eyes.

“‘Really? You don’t seem gay. You don’t have that voice.’

“‘We come in many voices,’ I assured her.

“… ‘Maybe if you met the right woman,’ she insisted. ‘Men and women really just fit together more naturally. You just have to look for a restored version of Eve. There are a few women, including myself, who are restored to their full womanhood.’

Denizet-Lewis also has a knack for describing non-humans too, specifically the book’s star himself:

“I’d awoken so early on the morning of our dog park adventure that Casey had looked at me as if I were kidding. Normally the word ‘walk’ elicits all manner of canine gesticulation (spinning, leaping, barking), but at 5:35 am on a cold weekday it elicited a strange, suspicious stare.

The author also isn’t afraid to talk about subjects that might ruffle some feathers, like the health risks of breeding Bulldogs, and PETA’s high euthanasia rate (95% in 2011) and their questionable activist techniques. It’s fascinating journalism, although his theory that PETA kills dogs just to keep them out of the hands of abusive humans seems like a bit of a stretch.

There are other flaws, as well: He doesn’t discuss his mother much, even though his analyst suggests his relationship with her might be the reason why he thinks Casey doesn’t like him. In addition, the part where he meets a guy on the road and they attempt a romantic relationship feels out of place and pointless. However, another personal section, where he describes how Casey helped him through a sex addiction, is beautiful and heart-wrenching:

There were times when I thought I saw some recognition in him of how small and miserable my life had become. He would look at me with what I was sure were the saddest eyes ever fastened to a dog. … Here’s what I know for sure: Casey helped keep me sane and alive as I lost friendships and a relationship. Though I never tried to take my own life, I certainly thought about it. But the mechanics of dog ownership…gave me just enough structure and responsibility to feel needed. Besides, I wanted him to see me get better. I wanted Casey to see me do right by him.

Unlike other dog books that focus simply on training or on an author’s personal experience, Travels with Casey gives us a little bit of everything—it’s an adventure tale, a psychological study, a history lesson, a trend piece, and a hard-hitting news story all in one. It’s funny, fast-paced, life-affirming, moving, and satisfying—in other words, everything a great road trip is supposed to be.

“Yes, I Really Am This Vulnerable”: 'Unthinkable Creatures' has Heart
'Leading Men' by Christopher Castellani
Literotic: 'Teleny and Camille' by Jon Macy