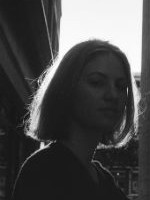 RIDING THE BUS BACK TO OXFORD

I wish I was a lesbian, she said. I tried, you know.
I nodded, I know. She turned towards the window

and closed her eyes. Her hair, still damp from rain,
was darker than usual. Behind her, a field

was revealing itself: grey heather along the road,
an abandoned house, green wheat

where the water began. I’m sorry, she said.
I just miss him. Later, she woke from a nap

to the sound of rain and touched her head gently
to my shoulder. Don’t get sick of me, she said.

In the dream, someone else dies,
not her.
I steer through a flush of moss,

plow along the soft shoulder.
In real life,
I take a lover. A man this time.

Pick up, please. It’s me again.
Stationary morning, I stand
in the field,

one arm extended to
the kestrel, the blue-
grey wing that won’t come down.

She speaks of Tel Aviv with nostalgia
yet follows me here, north of New York, by
train.

Out on the lake, I tell her about Cascadia,
why I won’t go near the west coast. I have
so many

fears. My breasts rise like gelatin when I lie
flat on my back, pressed against the netting.
One

eagle soars in the alpenglow, almost
brushing the clew of the sail. I cannot see
all of

Sacandaga, Pleasant, and Fawn Lakes,
but I feel their shadow, their dim cordillera
bearing

down on me, where the only visible star
middles in its flow, dangling like every
other

CATHERINE POND grew up in Alpharetta, Georgia and in the Adirondacks. She is Assistant Editor of Salmagundi Magazine and holds an MFA from Columbia University.