Did you know that you could write to Jeff Bezos?

You can. His email is online.

Customers write to him, and supposedly, he forwards them on to his team to respond.

Why is this relevant? Well, back in January of this year, I wrote to Jeff Bezos. I didn’t think anything would happen, since, you know, Amazon CEO, probably gets thousands of emails a day, but I have now learned I was wrong.

My story starts with an email—from Amazon, alerting me to new titles in romance. Since I do buy romance books, I opened it, and saw that it was listing only straight romances. This was strange to me since 99% of the hundreds of books I’ve bought over the last couple years from Amazon are LGBTQ romance books.

At the bottom of this all-straight romance email, there was a link that said, “See more” and I clicked on that, thinking, “Well, maybe what I actually buy is here.” That took me to the main Romance storefront of the Kindle store, featuring Nora Roberts (and her pseudonym J.D. Robb), regency, supernatural romances…and all were straight. And on the left of the page, there was a listing of almost 20 categories, from African American romance to gothic to mysteries to vampires to…time travel, but no listing for LGBTQ romance.

I scoured Amazon’s site to find a customer service email to complain to, and shot off a note to what I will now call, “The Ether.”

The Ether did not respond.

Sometime later, I complained to a friend in a bar about this issue and my email to The Ether, and she said, “Why don’t you write to Jeff Bezos? You can do that.”

But two beers will make any idea sound like a good one, so I went home that night, grabbed the email that I had sent to The Ether, added to the top “Dear Mr. Bezos”, found Jeff Bezos’ email online, and hit send.

That was Wednesday, January 22. Less than two days later, on Friday morning, I get an email from Anthony at Amazon’s Executive Customer Relations (ECR) telling me that, “Jeff Bezos received your email and asked me to respond on his behalf.”

Anthony said they’re looking into the issue, but in the meantime, did I know that there was a Gay and Lesbian section at Amazon, and that I could look there for the books that I want?

I was a little miffed here at Anthony. I think anyone who buys LGBTQ books at Amazon knows about that category, but that doesn’t solve the issue of having LGBTQ romance books excluded from the main Romance storefront, even though thousands of these books are tagged as connected to that store. (You can see all the tags at the bottom of each book page.) They’re just invisible from the main storefront, so the only way to find them is to go in through the Gay & Lesbian door or do a search on a title or author.

I started writing an angry response to Anthony, and while doing so, went to the main Romance storefront to get the link to paste into the email. When I got there, I stopped for a second, and I looked at it.

And I looked again.

It had already been changed.

Right there, in that list of categories on the side, was Gay Romance and Lesbian Romance. Right there with the Gothic and the Inspirational and the Multicultural and the Time Travel.

But what was most striking were the numbers.

On that day, there were over 11,000 Gay and Lesbian romance books.

That was the most striking thing. Not just that the change had been made, or made so quickly, but there were numbers showing how many thousands of books had been living in that store, hidden from the main page. Until that day.

I scrapped the beginnings of my angry response to Anthony and wrote a new note, and cc-ed Jeff Bezos, and thanked them for making the change. “I’ve always appreciated Amazon’s stance on taking the ‘long view’ on strategy, products, and customer service. Thank you for taking the long view on including gay and lesbian romance titles in the main romance section.”

This story isn’t about Amazon making that change, although I’m glad that they did since eight months later, you can see the Gay and Lesbian romance categories growing to almost 14,000 books.

It’s about knowing that even with so many advancements happening around us for LGBTQ media, that we’re still at a point where we need to ask (and demand) for change to happen. The Status Quo may not see the thousands of invisible books, but we see them, and we still have to ask for them to be visible. 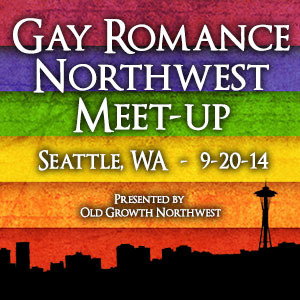 We’ve learned this lesson beyond this letter to Jeff Bezos as well. Since the summer of 2013, we have been striving in Seattle to increase exposure to LGBTQ romance books by hosting free public reading events, reader meet-ups, community book drives, and a conference, the Gay Romance Northwest Meet-Up, the only conference in the Pacific Northwest that celebrates LGBTQ romance fiction.

Since we started a little over a year ago, we’ve hosted nine public readings—at the University Book Store, at the Seattle nonprofit Gay City, and at the Seattle Public Library, showcasing more than 20 LGBTQ fiction writers. We have hosted seven reader meet-ups in Seattle and Portland, gathering queer romance readers and writers from around the region together. We have hosted two book drives, one for the Gay City LGBT Library and one for the LGBT youth services organization Lambert House, and amassed close to 400 LGBTQ books for their collections. We hosted our first conference in September 2013 at the Seattle Public Library that had over 120 attendees, and we’re gathering this September 20 for the second conference, with over 50 LGBTQ romance authors attending, and estimating over 200 attendees.

What I’ve learned from these efforts, like that letter to Jeff Bezos, is that all of these activities have started because we asked for them. We asked the library and the book store to host us. We asked donors for the books for the book drives. We asked the readers and writers to come join us and come meet each other. We asked community partners like Lambda Literary, Pride Foundation, Hedgebrook, and Gay City to partner with us and be a part of this initiative.

I have met resistance. To celebrating LGBTQ romance, or celebrating romance in general. (I’ve had more than one literary group tells us that they can’t be seen associating with our activities because we do something as lowly as “genre fiction.”) I’ve had local chapters of the Romance Writers of American (RWA) tell us they will work with us, and I’ve had other local RWA chapters refuse to be seen with us. I’ve had bookstores tells us that our readers aren’t “their kind” of customers.

But even with those setbacks, no matter how disappointing or demoralizing they are, we still were able to do as much as we did in a year because we asked for it. Because we, along with these readers, writers, and partners, acknowledge the value of queer romance books, and that they should be celebrated publicly like other books and not hidden.

A Call to Action

Since 2012, I’ve purchased 37 books by gay mystery author Josh Lanyon, and not once have I ever received an email notifying me about books similar in theme to Lanyon’s. But I buy one Richard Castle book on sale, and soon after, I receive the “You might like these other mysteries…” email. (None of which highlight LGBTQ main characters.)

I’m sure there isn’t a policy in place that prevents Amazon from notifying customers who buy LGBTQ books about other LGBTQ books they could buy.

All I know is, after giving Amazon all my customer data which very clearly states what I regularly buy, and receiving emails about what I don’t buy, these emails are like a strange, underlying message from Amazon telling me what I should buy, and who I should be. (And not recognize who I am.)

I asked back in July if they could look into this discrepancy, and imagine—imagine—what customers would buy if they were actually targeted with what they normally purchase?

Once again, Anthony from Amazon’s ECR replied, and said they were looking into it.

Unlike back in January, there has been no change yet, or at least no targeted emails saying “It looks like you buy LGBTQ books. Would you like to see more?”

If you read a lot of queer genre fiction, and if it bothers you that you don’t receive notifications about similar products, feel free to join me in writing to Jeff Bezos about it.

We can do that. His email is online.

There are still changes that can be made.

Tracy Timmons-Gray is the Event Coordinator for the Gay Romance Northwest Meet-Up and an unapologetic LGBTQ romance fiction fan. Her favorite authors in the genre are Josh Lanyon, Jordan Castillo Price, and Tamara Allen. Feel free to message Tracy if you’re looking for book recommendations. She has many.