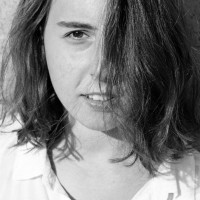 This week, a poem by Dana Kopel.

Dress up again like a woman for me
____You’re a kid again in the bathroom mirror, your bare new chest—

DANA KOPEL is a curator, writer and poet based in New York. She was an Assistant Curator for the Maldives Pavilion at the 55th Venice Biennale, and has organized or assisted on exhibitions at TEMP Art Space (NY), Kunsthal KAdE (Amersfoort, NL), and the Museum of Contemporary Art Tucson. Her writing has been published in the Brooklyn Rail and Keep This Bag Away From Children, among other publications.

Ocean Vuong, "The Prodigal Son's Lament"
LeShaun’s 'Wide Open' May Be One of the Queerest “Straight” Songs Ever
'Solace: Writing, Refuge, and LGBTQ Women of Color' Edited by S. Andrea Allen and Lauren Cherelle