Sandra Gail Lambert: On Her Debut Novel ‘The River’s Memory,’ Historical Research, and the Thin Line Between Short Stories and Novels

Sandra Gail Lambert: On Her Debut Novel ‘The River’s Memory,’ Historical Research, and the Thin Line Between Short Stories and Novels

I was nervous when Sandra Gail Lambert asked me to read an advanced review copy of The River’s Memory. I admired Sandra’s shorter works, but what if I didn’t like her debut novel? Weeks later, I leafed through the book, still under the spell of the sexy, unsentimental, beautiful muck and mire of this astonishing story. I loved this haunting novel.

Twisted Road published The River’s Memory in late July 2014. Excerpts of it have won prizes from Big Fiction Magazine and the Saints and Sinners Short Fiction Contest. Sandra lives with her partner in Gainesville, Florida—a home base for trips to her beloved rivers and marshes.

The River’s Memory reads as a novel to me even though some might call it a collection of linked stories. I’m damned if I can say why. Can you help me understand or disabuse me of this notion?

Always, for me, the river in The River’s Memory is the binding force that makes this a novel. It holds the characters’ lives and is what, sometimes literally, passes their legacy on to the future. But then, the question is how well I’ve managed to convey this to a reader, and for some of you, I won’t have done it well enough—so then, you’ll call me a short story writer. I really can’t lose.

There are so many ‘here’s where it all started’ stories, but here’s just one of them: I was on a boat in the Okefenokee Swamp [on the Georgia-Florida border], and a ranger pointed at a group of five cypress trees, three of them living, two dead. Those were called the five sisters, she said; they were named after sisters who had lived deep in the swamp because two of the sisters had been barren (isn’t that an awful word), and so the dead trees represented how their heritage had died with them. The ranger went on to talk about the importance of drought in cypress tree growth, but I was lost to a sudden anger. It had always seemed overwrought to me when people talked of a red rage that made a film over their vision, but that was precisely what happened. I gripped the aluminum railing on the boat and panted through it until I could be some version of normal again. It wasn’t the ranger’s fault for passing on a piece of folklore, but the assertion that because those two women hadn’t given birth they offered nothing to the future—that the lives they changed and the objects they created had no value—just pissed me off. I knew that was a lie. For instance, once I had touched an ancient pottery chard, felt the silkiness of the clay, and been changed. I had to believe that I, in spite of being a dead end on a genealogy chart, had something to offer the future. This novel is an answer to that. If you want to imagine me making a rude hand gesture, please do.

Can you share your thoughts on creativity—in your life, in this book or in the lives in this book?

Jane Hirshfield once gathered forty-three centuries of women’s spiritual poems into an anthology. In the earliest poems, I was taken with the way the yearning for spiritual understanding and what we now call scientific knowledge were one in the same—and of course, these yearnings were expressed in the creativity of a poem. So, when my characters yearn for the skill to cast a perfect bowl or to know more about the river they live beside or for a dog with floppy ears or just straight out yearn in a lustful way, I think it’s all the same thing and that what is important for my characters and for me is that we yearn.

Many women fight for survival and eventually lose, as we all must, in this book. Does writing ‘from the body’ and ‘the natural world’ influence the clear-eyed beauty of your writing? Also, how did you manage to keep the narrative so free of sentimentality? 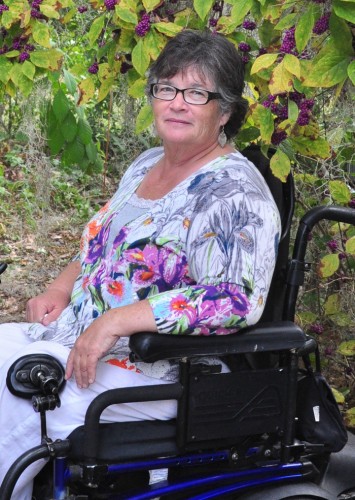 Thank you for the compliment. I think you’re right that these two questions are related. I do abhor, maybe too much, sentimentality, and I think that does have to do with the way I write ‘from the body.’ I’ve been disabled since I was a baby, and even though disabled people write in all sorts of ways, it’s not often that we leave the body out of our writing. This focus on the details of the body and how it moves through the world, on the tiresome frustrations, slapstick moments, and grand triumphs, can provide a texture to writing that ends up adding power to all types of description. In writing about the natural world, it certainly helped me stay clear of too long descriptions of the lower jaw of a dragonfly naiad or the way nictitating membranes work in alligator eyes. (Feel free to contact me if you ever want to know more—much more. Also, I have a whole story about why women in the 1800s wore crotch-less underwear.)

Why did you choose not to name many, if not most, of your characters?

The last chapter, the one set ten thousand years ago, was written first. I tried, but made-up names like ‘Thrud’ or animal names like ‘Fierce Beaver’ all felt as if I were patronizing my characters, so I didn’t name them, and that carried on through most of the novel. Plus, I live in a place where it is just regular for someone to be called ‘Brother’ or ‘Daughter’ by their family for all their lives—and I have to admit that all my life, no matter how long I’ve known you or how much I admire you, when I go to make introductions, I will most likely not remember your name—even if I’ve practiced beforehand, which I do.

How much historical and ‘kayaking’ research did you do to unearth the clay spirits and bones that build these stories?

Oh, I researched. I went to natural history museums and the microfiche rooms of libraries. I went to a gathering of the old folk who used to be kids at Paradise Park, an amusement park right alongside the Silver River where my novel is set. African-Americans came from all over the country to vacation there, yet it’s been lost to time except for their memories and the faded picture postcards they passed around. Also, I camped for days at a reenactment gathering along the same river. There I’d sit with an old man who had worked on his grandfather’s ‘Spanish windmill,’ and then, I’d go write that type of boat into a scene. I took part of a chapter and asked a woman in a bonnet who was churning butter by hand how long the sleeves of my character would have been, and she knew. I watched a Frederick Douglas reenactor in his dapper black suit and an old-timey white sheriff with shiny pistols argue (in character) about why the Negro people should or should not have joined the Union and then was able to better imagine the freedman character in my novel living in prewar small-town Florida. Once, I was at a used bookstore, and a skinny, disintegrating chapbook fell out into my hands. It was a report to the state government about the Florida Industrial School for Girls—the setting I was using for one of my characters. Lastly, I’ve kayaked the novel’s river many, many times. It’s one of those ‘source’ places for me, an environs where I can renew myself. It’s also where I’ve watched the terrible changes in water quality over the decades, so there’s always a mix of sadness in its beauty. In a more practical vein, I’ve kept a record of every trip I’ve made, so for every season, I know what bloomed when, which birds and types of butterflies were there, how the trees looked, the clouds, etc.

Speaking of history, you’ve managed a bookstore. You are a sixty-two-year-old debut novelist. Welcome to the club. Do you have any stories about the road to publication, age, community, or anything else?

When people talk about ‘building a platform,’ I always want to yell out (and sometimes I do) that ‘it’s not the platform, it’s the community.’ I mean, of course, it’s many things, like trying, always, to make my writing better or persevering through rejection and then collapsing and then persevering again, but also, it’s about creating community. I was a lesbian-feminist bookstore owner for most of the eighties, so I know about building community. Understanding how important it is to make connections, not in the sense of promoting myself but rather as a way to include people in my writing life and be included in theirs, has kept me in good stead. For instance, every time I go to a writers’ conference or retreat my bottom-line goal is that I gather up one more writer friend—and if you trace back the thread of what led to this, my debut novel’s publication, it leads right back to this one friend that I made at this one conference six years ago.

A plug for Twisted Road, please?

Ah, Twisted Road. I am the debut author of a debut literary press. It could have been a disaster, but instead, it’s been thrilling. First off, Joan Leggitt, my publisher, is a superb editor. It was as if she could read right into the heart of the book. Her support, from the advance she’s offered to the promotion efforts, has been exemplary. We really are a team. Oh, and she’s a complete obsessive about things like paper quality and book covers which makes me, the ex-bookstore manager, happy. She has three additional books coming out this year, all of which are so worth reading.