‘If This Be Sin’ by Hazel Newlevant

‘If This Be Sin’ by Hazel Newlevant 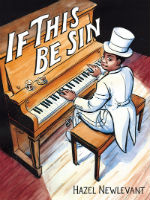 I love comics about musicians, especially behind-the-scenes bios about their life and creative processes. So for me, Hazel Newlevant’s comic If This Be Sin, which features three music related stories, was like getting triple scoops of my favorite flavor. Plus, one of the stories is about the falling out of rock star musicians Wendy and Lisa with Prince, which this former Minnesotan couldn’t wait to read. What better way to celebrate the thirtieth anniversary of Purple Rain than with a little reality check on what Prince is really like?

The opening story is about Gladys Bentley, the Harlem Renaissance blues singer. Born in 1907, she left home and came of age in Harlem during the roaring twenties. The spirit of tolerance of the time allowed her to perform in men’s attire in gay and lesbian clubs, and rent parties. She continued to sing and record for two decades, only to be shut down in later years, when the conservatism of the fifties forced her to dress in women’s clothes in order to perform. Newlevant’s done her research, as evidenced by the included bibliographic citations. But it’s her sensitive drawings that make this history come alive, capturing both the vibrancy of Bentley’s performances, and the hurt Bentley felt of having to dress and live a lie.

Prince’s rise to fame in the early eighties was illuminated by an aura of sexuality, gender bending and racial freedom. But behind the purple door lurked plenty of old-fashioned chauvinism and male egotism. The second tale tracks the excitement lesbian rock stars Wendy and Lisa felt, being asked to join a band called the Revolution by its enigmatic purple leader. At first, it was fun to be surrounded by so much creativity, but Prince wasn’t able to handle his talented female protégés coming into their own. The story ends with Wendy and Lisa asserting their own identities as musicians, refusing to be part of what Prince insists is “his, not their band.”

In the third tale, “Dance the Blues,” two friends Carita and Amal enter a dance competition where they’re paired with various partners. Carita survives several rounds with male partners, including Todd, a jerk who tries to upstage her. But when she meets Alex, something in her lights up. Alex wins, Carita doesn’t, but the real hurt comes when Carita invites Alex to get something to eat afterwards, only to get shut out by Alex’s reply: she’s getting a ride home with Todd.

It’s easy to see why Newlevant’s stories won the 2013 Prism Comics Queer Press Grant; her drawings, like Raina Telegmeier’s work, have an inviting, accessible style that will entice even readers who say they don’t read comics. It will be exciting to see where the freshness and enthusiasm of her work leads her, and to read what this rock star of cartooning does next.

'Anything That Loves' Edited by Charles “Zan” Christensen
'The Desperates' by Greg Kearney
Ariel Gore: Taking Care of Mother