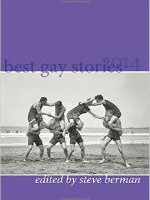 Lethe Press, the independent press that publishes the annual Best Gay Stories anthologies, takes its name from the river of forgetfulness and oblivion in Greek mythology. With the publication of Best Gay Stories Lethe’s name becomes a bit of a misnomer for two crucial reasons. The first is that most of the twenty stories collected in the 2014 edition deal with memory, to the extent that “memory” means the absence of forgetfulness. Only three of them are in the still-cutting-edge present tense; the rest are firmly in the past, confronting issues of wanting to forget the traumas and stigmas of growing up gay in the previous generation, but also of nostalgia. As editor Steve Berman writes in his introduction, “The men you will meet in these pages are pained by the realizations that they are no longer young boys who can leap off rocks into a swimming pool or can happen upon a tryst without consequence. Some are at the precipice of adulthood, some are already across the great divide of years[…]”. The second reason for the name’s irony is simpler: most of these stories are truly quite memorable and attentive.

The assemblage of stories is impressive in its diversity. There are two translations: an excerpt from Austrian author Josef Winkler’s novel The Graveyard of Bitter Oranges—which is the most explicitly erotic of the group—and Dmitry Kuzmin’s “On the Moscow Metro and Being Gay,” an introspective essay that discusses how its two titular states of being reflect the desire for power that seems so prevalent in the Russian character. There is also “Ma tu sei pazzo?!”, Tommi Avicolli Mecca’s sweeping summary of the role of Italian-Americans in LGBT and labor rights activism. Sewed into this history lesson is the author’s memoir of growing up and coming out amidst the ultra-Catholic, ultra-conservative environment of southern Italy and the Italian diaspora. There are few less equivocal moments in the anthology than when Mecca states with startling candid simplicity that when he came out to his family, one “uncle suggested to my oldest brother that they take care of me Godfather style.”

Rounding out the nonfiction in the collection is James J. Gifford’s essay “Proem: How to Read Gay Pulp Fiction,” an homily to the now-out-of-print dime store paperbacks that broke ground in male gay narratives in the early twentieth century. For contemporary readers left jaded by the onslaught and easy accessibility of traditional formulaic literature both inside and outside of the LGBT genre, Gifford provides a refreshing approach to the pulp novels that he resurrects. Of course, there are stories that smudge the boundaries between fiction and reality, such as Richard Bowes’ “Seven Days of Poe,” which—as one may guess—dissects a week in the life of the narrator, a library employee, through allusions to his beloved Edgar Allan Poe stories. That story could turn out to be fiction, yet the invocation of the locale—1960s Boston—and the affinity for the Poe tales—which are used variously as mimicry, fantasy, symbolism and even contrast—all feel genuine insomuch that a semi-autobiographical impression is unavoidable.

Motifs that ring as true-to-life in the gay culture run in navigable circuits throughout the collection. Drugs, awkward love triangles, off-kilter family situations and police raids are more or less ubiquitous, and AIDS is never far from around the corner. While this means that a few of the stories spend too much time tiresomely waxing rhapsodic and meandering through their characters’ hectic lives without building up tension or dilemma, it also provides the collection a chance to place different, clashing viewpoints of an issue side by side. Guy Mark Foster’s “The Rest of Us” and James Powers-Black’s “Fend for Yourself,” for instance, are at loggerheads with each other on whether gay couples in dangerous settings should publicly display affection as a means of protest, or hide their romance for the sake of safety. (Trebor Healey’s strong “The Cervantino Baby” also has input on that issue, though it focuses more on couching its story in the contexts of Mexican culture and life as an exchange student.) Homosexuality announces its presence and integrality right away in most of the stories, with only one of them using it as a climactic plot twist. That one is Michael Alenyikov’s “Left on Monsignor O’Brien,” and it gets away with it because the author evokes the story’s Boston locale as expertly as Bowes.

Though the collection is worth reading in its entirety, there are three standouts that deserve citation. The first is the aforementioned piece by Mecca. The second is Ed Kurtz’ “The Trick,” a dexterous tragicomic yarn involving four New Yorkers, some racehorses, a spiked drink and a locked safe. The fatal mistake that appears to conclude this tale of petty crime on a somber note is eclipsed by a perfectly timed deus ex machina, which is made all the more astonishing by the further implication that the one character who benefits from it is likely to repeat his errors because of it. The third standout is the anthology’s closer—“King” by Max Steele—which packs the stream-of-consciousness of a handicapped elderly man longingly watching a young dancer into three terse pages that are full of moving bravado and unashamed empathy.

Alec Johnsson is a member of the Class of 2015 at Haverford College, where he majored in English and minored in Anthropology. He is from White Plains, New York and has studied abroad in Copenhagen, Denmark. Some of his thoughts can be found on his blog, Hydroplaning to Byzantium.