‘Pissing in a River’ by Lorrie Sprecher

‘Pissing in a River’ by Lorrie Sprecher 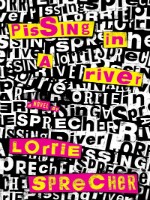 Amanda, the narrator of Lorrie Sprecher’s Pissing in a River, is a sort of human radio. The station format? Mostly British punk, with a little airspace left for guiltier pleasures such as Heart and Oasis. She interprets her life through lyrics—a Patti Smith song supplies the book’s title–and can barely go a full conversation without name-dropping a band or album title. We meet her as a college student on a study-abroad year in Exeter and check in with her periodically as she embarks on a career as an AIDS activist and Ph.D. student.

Meanwhile, something else is playing in her head: the voices of two British women, speaking to each other and, occasionally, reaching out to comfort the sometimes-suicidal Amanda. She doesn’t view them as symptoms of her depression or her obsessive-compulsive disorder, but as more of a spiritual phenomenon–a view the reader is compelled to accept, because, as it turns out, those voices belong to real people.

Their names are Nick and Melissa, respectively an unemployed punk lesbian and a physician who still slips into bondage pants on weekends. Amanda’s relationship with them forms the heart of Pissing in a River, although it takes a while to get there. The book is positioned as a novel, but much of the narrative feels more like a person recounting the adventures of her youth for a sympathetic audience. (The outlines of Amanda’s curriculum vitae do roughly follow Sprecher’s own.) Having once been a teenager whose listening habits made me more conversant with the politics of Margaret Thatcher’s England than with those of my own just-pre-9/11 America, I am probably about as sympathetic an audience as Sprecher could hope for.

Readers who do not share this set of references may have a bumpier ride. Casual conversations and college pranks get covered in detail, while larger life developments are recounted from a curious distance. Twenty years go by in 50 pages–which may be a sensible choice given that the woman at the end of them is still pretty much the same wide-eyed Anglophile of the beginning. Through it all runs an obsessive attention to the minutiae of punk fandom, with no guitar model, concert bootleg, or band T-shirt left undocumented.

A stronger editorial hand might have pared away these distractions from the core story, but that story does prove compelling once we reach it. Around the book’s midpoint, all the stuffand surface of the punk-rock lifestyle is dispersed into something bigger: namely, a meditation on the ways in which the ghosts of sexual violence and homophobia interfere in relationships between women. Nick is haunted by an ex-girlfriend’s neo-Nazi brother, who wages a campaign of harassment against her that simmers just below the radar of the law. Amanda comes to her rescue in the middle of a separate assault, when a stranger tries to rape her on the street.

For a punk lesbian on welfare, neither the police nor the hospital can be presumed hospitable. Instead, the pair seek help from Melissa, an older friend of Nick’s who is herself struggling with memories of being raped by an ex-boyfriend. She’s not inclined to talk about it even as she tries to guide Nick through the aftermath of the attack, and Nick tries to shake off her feelings of victimhood by throwing herself into booze and one-night stands. All the while, Amanda is falling for the presumably straight Melissa and weighing how much to reveal about her mental-health history–including the fact that she seems to have met her new friends inside her head long before they appeared on the streets of London.

How soon is too soon to reveal one’s particular brand of emotional damage? Where is the line between openness and overreliance on loved ones? These are questions that gnaw at anyone who’s survived trauma or mental illness, and Sprecher’s utilitarian prose lets them emerge and develop quite gracefully through long conversations and chains of misread intentions. Her ear for dialogue is fine—readers, too, will vividly hear Nick’s and Melissa’s accents in their heads–and her love scenes neither clinical nor purple.

And there are, eventually, love scenes for our infatuated heroine. Despite the darkness of its material, Pissing in a River is an optimistic book. It posits that activism can make a dent in the political machinery, that punk music can create change long after its ride on the zeitgeist, and that tenderness and honesty can bloom into both deep friendship and passionate love given a little time. We may occasionally want to turn the volume down when Amanda veers into yet another paean to Chrissie Hynde or the pleasures of burning flags, but we wouldn’t want to disenchant her of these beliefs.

'The Fletcher' by K. Aten
'Straight: The Surprisingly Short History of Heterosexuality' By Hanne Blank
'Returning to Reims' by Didier Eribon