Mabel Dodge and the Literary Salon of Taos

Mabel Dodge and the Literary Salon of Taos

Literary Taos has strong ties to the LGBT community that have been nurtured through the 20th century, and continue today.

Northern New Mexico is home to this rich literary community nestled in the Rio Grande Valley of the Sangre de Cristo Mountains. Taos takes its name from the nearby Native American town of Taos Pueblo, a millennium old UNESCO World Heritage Site. The spiritual energy of the Pueblo has attracted creative types to the small town for well over a hundred years. Artists and writers began setting up colonies at the turn of the 20th century. One of the most influential and popular colonies is that founded by Mabel Dodge Luhan, a bisexual bon vivant, who cultivated a rich creative community of famous artists and writers from her arrival to Taos in 1918.

Mabel was an educated socialite whose first taste of salon was in New York City; between 1913-1916 she hosted literary and political meetings, which she called “Wednesday Evenings,” at her home on Fifth Avenue. She even helped organize the first Armory Show in 1913, which she referred to as “my own little Revolution”: “I was going to dynamite New York and nothing would stop me.”

She had as many husbands as the Wife of Bath but also had her female paramours. Her friendship with Gertrude Stein, who was running her own famous salons out of Paris, was certainly sapphically charged. Mabel was completely smitten with Gertrude, fetishizing the latter’s largesse and, as she wrote in her memoirs, her “grand ampleur”:

She loved beef and I used to like to see her sit down in front of five pounds of rare meat three inches thick and with strong wrists wielding knife and fork, finish it with gusto, while Alice [Toklas]  ate daintily, like a cat….

She would arrive just sweating, her face parboiled. And when she sat down, fanning herself with her broad-brimmed hat with its wilted, dark-brown ribbon she exhaled a vivid steam all around her. When she got up she frankly used to pull her clothes off from where they stuck to her great legs. Yet with all this she was not at all repulsive. On the contrary, she was positively, richly attractive in her grand ampleur.

Upon her visit to Mabel’s Italian home at Villa Curonia in 1911, Gertrude wrote a portrait that would soon become notorious for its depiction of Mabel in coitus with her son’s 22-year-old tutor. “So much breathing,” Gertrude suggestively writes, “has the same place and there must not be so much suggestion…. There can be the climax.”

Mabel’s salons at the Villa Curonia were notorious for their sapphism, as she details the typical scene in her memoirs: “Dominico [a servant] would bring enormous platters of sliced watermelon and bunches of grapes to us here — and the groups of shadowy women eating the ripe fruit in the dim light were as sumptuous as ever Sheba was, surrounded by her maids.”

She introduced Gertrude to Carl Van Vechten, the person who would become Gertrude’s best friend and executrix of her estate. But their relationship soured, Mabel thought, because of Alice’s jealousy. She pinpoints the falling out to Alice’s response to a particular moment of flirtation between herself and Gertrude during a lunch at the villa in 1912: “Gertrude…sent me such a strong look over the table that it seemed to cut across the air to me in a band of electrified steel — a smile traveling across on it — powerful.” It was so powerful that Alice stormed away from the table and Gertrude “got up and followed after her.” 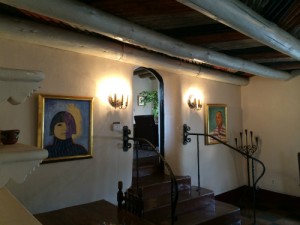 Mabel moved to New Mexico with her then-husband in 1917, but upon meeting Native American Tony Luhan of Taos Pueblo in 1918, left her husband for Luhan and married him. They purchased property that they named Los Gallos, or what is now the historic inn and retreat center known as the Mabel Dodge Luhan House, situated outside the center of Taos and not too far from Taos Pueblo.

“Mabel’s House,” as locals fondly call it, is situated in the north of town, in the sage-covered valley of the Sacred Taos Mountain. The architecture is Pueblo inspired, but the decor — largely unchanged since Dodge’s days (even Dennis Hopper left it untouched when he bought the house after her death)–is a quaint mix of mid-century German and Northern Italian country style. Rooms are named for famous guests–the Ansel Adams Room, Frank Waters Room, Frieda Lawrence Room — with hand-carved wood beams and exposed adobe walls. Herringbone vigas, kiva fireplaces, and traditional arched doorways also lend the property its unique character. There are a solarium, library, and bookstore for visitors who are not residing at the inn but who find it a point of interest. 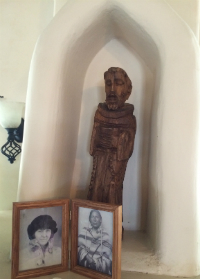 She also worked tirelessly to establish Taos as a literary and artistic haven for women, which still exists today. Every year there is a series of workshops for both literary and visual artists. This very natural, earthy female energy was palpable during my visit there last month, and it is an energy that extended beyond the House to the city of Taos itself. In my meetings with some of the writers, artists, and creative types about town– all women who knew each other–I gathered that they not only nurtured each other’s work but personal life, as well. Taos is unique in how women centered it is, and that, unlike, say, New York City, the women support each other instead of cutting each other down or seeing each other as competition. It was refreshing, as well as a testament to the enduring legacy of Mabel herself.

'The Lemoncholy Life of Annabelle Aster' by Scott Wilbanks
‘Follow Your Own Weird'—New Documentary Probes the Life and Work of James Broughton
New In May: Bono, Bray, Bronksi