A Sort of Modern Buddha: The Influence of Yogic Philosophies on Gertrude Stein’s Method of Writing

A Sort of Modern Buddha: The Influence of Yogic Philosophies on Gertrude Stein’s Method of Writing

Smitten with Gertrude Stein, like many of her male contemporaries, sculptor Jo Davidson determined to have her serve as one of his subjects. In 1920, over coffee and conversation, Davidson had Stein sit for him, in one of the most memorable, non-Picasso related, artistic renderings of the avant garde, modernist writer to date. 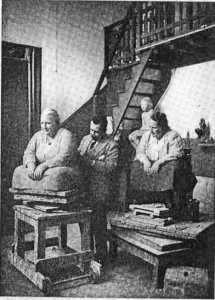 The sitting was infamously narrated in a later issue of Vanity Fair: “For his Stein sculpture, he needed to capture her earthy essence. ‘To do a head of Gertrude was not enough—there was so much more to her than that. So I did a seated figure of her—a sort of modern Buddha,’ [Davidson] explained three years later when the statue was finally cast.”

“A sort of modern Buddha,” indeed.

There is something melodic and meditative about Gertrude Stein’s writing, in both its lexical simplicity and repetition, that betrays the writer’s idiosyncratic style that is at once both poetic and philosophical. Scholars and avid Stein readers point to her mentor, the Harvard professor William James, as well as continental thinker Henri Bergson, as the philosophical reference points for her “intuitive” writing style, but Stein’s poetics arguably has more eastern influences.

Theories of intuition—in terms of epistemology, the faculty of perception akin to insight that lies beyond the intellect and is created and experienced through the body—appropriated by western thinkers, including James and Bergson, originated in eastern philosophy. In 1896, James invited Swami Vivekananda, to Harvard to deliver a lecture on his Vedic philosophy that he had introduced to the western world during his tour throughout America, beginning in the late 1890s.

One of the most famous spiritual leaders of the 19th century, Swami Vivekananda is credited both with reviving Hinduism in his homeland of India and with disseminating the philosophies of Vedanta and yoga to the western world. 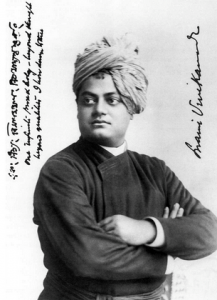 For Vivekananda, meditation enabled the religion of creativity. “Creative energy,” he writes in “The Hymn of Creation,” “at first in darkness hidden darkness lay,” takes shape from, and emanates through, meditation.

Stein attended his lecture at Harvard, although it is believed she met Swami Vivekananda at a meeting at the house of Sara Thorp, at 168 Brattle Street in Cambridge, Massachusetts, on 7 October, 1894. Thorp had what seems to be a “Boston marriage” with Sarah Jane Farmer, who owned a spiritual retreat in Cambridge, and the two of them were integral to introducing the swami to various intellectual circles in the metropolitan Boston area. Decades before George Gurdjieff and his flock of lesbian followers took root in Paris—who formed a group called “The Rope” that was largely organized by Jane Heap, and included the likes of Janet Flanner, Katherine Hulme, Margaret Anderson, and Solita Solano, and, yes, occasionally Stein herself—there was Vivekananda and his own American version of a sapphic fellowship.

Stein’s writing was very methodical in its expression of this type of intuition. It was also profoundly multi-sensory in its rhythmic qualities, and in this regard noticeably similar to meditative practices that include chanting, or the repeating of a single mantra—“A rose is a rose is a rose is a rose.” This is why, “for Stein,” Peter Nicholls explains in Modernisms: A Literary Guide, “language is to be grasped not as a means of reference to a world of objects which can be dominated, but as a medium of consciousness.”

She lectured variously about her writing method and style in the 1930s, most notably documented in the publication Lectures in America (1935), as well as in the essays “How Writing is Written” (1935), “Narration” (1935), and the earlier “Composition as Explanation,” the latter of which was delivered as a lecture at Cambridge and Oxford and soon thereafter was published by the Leonard and Virginia Woolf’s Hogarth Press in 1926. In all these works, Stein depicts the writing process as something internal to her being, as a type of metaphoric gesticulation and bodily production, resonates with contemporary yogic philosophies—all of which are predicated upon the 5th century writings of Pantajali—on the ethics of living and, particularly, on the import of mediation. The asanas, or practices of yoga, which work to cultivate the prana, or the vital energy of the body, ignite a person’s creative flame. This method of creative production outlined by yogic philosophies appears to have strongly influenced Stein’s understanding of how “writing is written.”

What these philosophies show, and what Stein effectively demonstrates in her lectures as well as her creative writing (Stanzas in Meditation comes immediately to mind), is that the writing process is not a cognitive endeavor consisting of mechanical transcribing of stream-of-consciousness thought, but a full body experience that originates in the body. The conception of writing as a “bodily activity” is one that Stein’s readers have understood as her perhaps unconscious appropriation of the language of a motherhood that she would naturally never know, but I believe it to be instead a spiritual effort of shakti (creation) in order to achieve true yogic enlightenment. Stein’s interest in deconstructing how things worked bespoke her even greater interest in how things come together in production.

—from A Long Gay Book