Janus is the ancient Roman god of beginnings and transitions; he looks to the past and to the future. Janus is usually depicted with two faces. I’d like to re-appropriate this ancient archetype as the god of transitioning genders for the first book I will review by L.A. Witt that was just reissued in January. Then I will use this same archetype to discuss authorial collaboration–two heads are better than one–in the romance genre in a new release from L.A. Witt and Cat Grant. Finally, I will look at a recent release by Cat Grant that masterfully uses parallelism to illustrate the choices that the characters must make between self-hate and love.

Static by L.A. Witt, originally published in 2011 by Amber Allure, has just been reissued in a revised 2nd edition this month by Riptide Publishing. The multiple award winner (Best Science Fiction Romance, 2013 EPIC Awards; Best Bisexual/ Trans Sci-Fi/Paranromal /Fantasy in the 2011 Rainbow Awards; and Finalist for Best Transgender Fiction in the 24th Annual Lambda Literary Awards) earns its stripes through a thought-provoking examination of gender and love.

Alex is a shifter, a person who is able to transition between male and female physiological characteristics. When Alex meets Damon, a heterosexual cisgendered male, in their female form and falls in love with him. Alex remains closeted about their male self, but not without serious consequences including depression and alcoholism. When Alex’s fundamentalist parents force Alex to undergo surgery to “fix” their gender in male static form, Alex must learn how to live as one physiological gender and Damon is confronted with a choice: Can Damon love Alex in his male form? 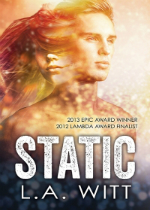 Witt’s choice to use a sci-fi strategy to tell this story is interesting. It is not that uncommon for a real-life lover to find him or herself in a relationship with a transitioning partner and so it seems that she could have told this story as a contemporary romance rather then invoke the sci-fi shiftier motif. Perhaps enough has changed in the three years since the novel was originally published that what is now felt as a common place could only be expressed then in a near-future world. Nonetheless, the shifter motif does work well with this story and Witt uses it to good effect to explore questions of gender, sexual orientation, the closet and the meaning of sexual love.

I was particularly impressed with Witt’s re-appropriation of the clichéd romance motif of “gay for you” to explore Damon’s love for Alex as a person especially since she uses this to ask what part does gender play in our person-hood, our sense of self?

Witt tells her story by alternating points of view between Alex and Damon, but, not unsurprisingly, this sometimes made me confused about which “he” she was referring to, Damon or Alex’s male form. Perhaps this was intentional to make me look at my own cisgender assumptions. Interestingly, the one person in the novel who is not confused about their gender is Alex.  Alex is male and female and only finds wholeness when able to express both.

L.A. Witt is one of those prolific romance writers who I have wanted to review but was never able to catch up with her!  You can catch up with Witt at: www.loriawitt.com.

Two Heads are Better Than One

For whatever reason the romance genre seems to lend itself to authorial collaborations and as a reviewer I find myself trying to psych out each authors’ voice in the finished book. But in a novel as good as The Only One Who Knows by L.A. Witt and Cat Grant (Samhain Publishing, 2014) it’s a futile effort because the authors’ voices are one.

In a post DADT military there are still obstacles to man-on-man love, and when Chief Officer David Flint becomes the object of rookie SEAL-in-training Lieutenant Josh Walker’s love interest, they find themselves putting their careers and hearts at risk in this action-packed men-in-uniform page-turner. 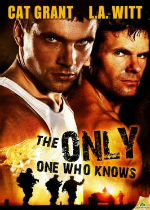 The Only One Who Knows

Flint is tougher on Josh than on the other men, not just because he is in love with the younger man, but because he sees in him the makings of a true SEAL. In bed the roles are reversed: “The ball-busting Chief Flint who’d driven Josh into the ground” becomes “the man Josh had driven into a mattress.”

After training the men’s dominance roles are reversed again when Flint finds himself as a subordinate officer under Walker. The two keep their romance on the down low, but when an ambitious medic on their team gets wind of the affair he uses the information to try to blackmail Josh into altering his “fit rep.” A crisis occurs when Josh makes a choice under fire that casts doubt in his men’s minds about his possible favoritism towards Flint.

Witt and Grant capture the staccato abruptness of military men in love. Likewise, the fighting scenes are pulse accelerating.  The sex scenes between Josh and David are virile and hot. One encounter in a bathroom stall in an off-base dive bar is especially intense.

The Dog Not Taken

Cat Grant shines on her own in Black Dog, the first in her new Bannon’s Gym series (Cat Grant Books, 2013) that lovingly explores the choices we make and how we create our families of choice.

When Eddie finds Tom, a homeless teen with hands bloodied from an alley fight, he takes him under his wing and gives him a job at the seaside diner he owns with his mom, Gloria, in a small California coastal town. As Tom becomes part of Eddie and Gloria’s lives, we begin to learn that Tom isn’t the only person who is running away from something difficult in his past. Eddie has been running away from Danny Bannon all of his life, first in seminary and then as a Marine, because of the deep guilt he associates with his love for Danny. 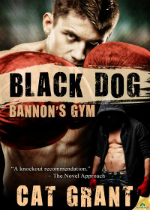 Danny recognizes in Tom the same promise as a fighter that Eddie once showed before he retired from the pros and he invites the teen to train at his boxing gym. As Tom begins to hone his boxing skills, Eddie and Danny must face their past together in the hope of giving Tom a better future. When Tom’s mom shows up at the diner, his future is threatened by the drama of his parents’ tragedy.

Grant uses a beautiful parallelism between Eddie and Tom to discuss issues of guilt and love that is freshly moving.  She uses wonderful contrasts, for example, between Eddie’s mom, Gloria, and Tom’s mom, to show how persons in parallel situations can choose life and love or self-hatred and death. Both Eddie and Tom must choose and Danny is the linchpin in both of their choices.

What I loved most about this novel was its portrait of Tom’s found family. Grant paints such a lovely ordinariness in the scenes with Eddie and Gloria at the diner—you can almost smell the flapjacks with butter. Gloria is everyone’s favorite mom. The action scenes of Tom training with Eddie and Danny at Danny’s gym are soothing, like brothers playing football on the front lawn. The love scenes between Eddie and Danny feel like the guys next door rather than two romance heroes. So, when ghosts from Tom and Eddie’s pasts threaten all this, it is heart-gripping.

You’ll want to visit this family again, so readers will be glad that Takedown, the second in the Bannon’s Gym series, is due out in July.

Backwards and Forwards, I Go

With this column, I must say good-bye. Writing “Book Lovers” each month has been a tremendous opportunity and I am so thankful for my Lambda Literary family who decided to take a chance on me, Antonio Gonzales, Tony Valenzuela, Richard LaBonté, Kathleen DeBold and most of all, my editor, William Johnson.

When I first started writing this column I was one of the newly unemployed in the Great Recession with plenty of time to write a monthly review column, but now, thanks to President Obama’s stimulus package, I have been employed for four years. In addition, I am now writing community theater reviews for my hometown of choice’s daily newspaper. Romance deserves someone’s full attention.

From the start I wanted to show the romance genre the respect it deserves, both as a publishing powerhouse in sales and also in the quality of the fiction romance writers consistently produce.I also enjoy controversy and I recognized qualities in romance that though discussed theoretically about other fiction are a lived experience for the romance writer and reader.

For example, though the idea of transgression in literature certainly might apply to some works, it is difficult to imagine that the largely academic or intellectual readership of such novels really feels threatened when they are caught reading them.Contrast the housewife, shop assistant, gay computer geek, or home husband who reads m/m romance with two bare-chested men lip-locked on the cover. These ordinary romance readers are the ones who are putting themselves on the line every time they pick up a book. They are outing themselves as gay romance readers.

In fact, gay romance is such a transgressive genre that women m/m romance writers are even told that they “can’t” write gay romance—it isn’t allowed!  Though this absurd attitude is now, hopefully, behind us, my very first column, “Straight Women/Gay Romance,” is still my most pinged and referenced column. Women writers of m/m romance happily publish anyway and readers—gay men and straight women—happily read them.

Romance writers are so prolific that my biggest challenge writing a monthly review column was just keeping up with all the authors and all their books.  Romance writers often put out two to three major novels a year.  Some complain that the volume means printing mill quality, but as a reviewer, I actually found the opposite to be true: most of it is pretty good stuff, and so it made even harder to chose the three or four I wanted to review each month.

Some major romance authors, like Andrew Grey, J.L. Merrow, Lou Harper, Lisa Worrall, Charlie Cochrane, Abigail Roux, to name just a few, I just couldn’t catch up with. I was barely able to scratch the surface of one of the most important genres within romance, African American gay romance, pioneered by the late E. Lynn Harris. The tremendous historical romances by Alex Beecroft and Lee Rowan—never reviewed. Other important authors and sub-genres, such as speculative and fantasy romance, missed. So many books, so little time!

I am especially proud to have championed some local Las Vegas gay writers whose significant works might have otherwise been overlooked: Jed A. Bryan’s Companions, about Mormon missionary lovers stationed in the Navajo Nation in the 60s; R. J. Stastny’s romance memoir, Falling Forward; John M. Bowers’ sequel to Maurice, End of Story, and Until Someone Gets Hurt, Sherrie Lueder and Tyson Wrensch’s true-crime romance.

Most importantly, however, I’d like to thank Rick R. Reed, whose Raining Men proved to be life changing for me.  In my review I was critical of what he had to say about promiscuity and gay marriage, but the more I reflected upon his words in my heart, the more I have come to appreciate the sobriety of love.