Winter is one of the most magical of seasons, at once dark and luminous. The winter holidays also carry with them some of our deepest memories of the old religion present in the Solstice wreath, the Yule tree, and the holly and the ivy. The first two romances I review in this month’s “Book Lovers” contain memories of the time when our world left behind the old faith to embrace the new, and the second two address how even in a world that is superficially secular, a deeper magic runs beneath.

The woods are lovely dark and deep

The Mingled Destinies of Crocodiles and Men by Eric Arvin (Wilde City Press, 2013) is a complex blend of fantasy, horror and romance that ultimately transcends genre and must be accepted for what it is, a beautifully written masterpiece of gay literature. 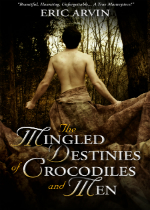 The Mingled Destinies of Crocodiles and Men

The novel’s story is generational and involves a multitude of characters but all are bound by fate to the central character of Minerva True, a prophetess who remembers the old ways of the River in a valley on the edge of a contemporary world. The plot cannot be easily summarized but involves the struggle by three young heroes, the lovers Leith and Aubrey, and their friend Deverell against the encroaching darkness of the New Religion and the industrial world that comes in its path. Leith and Deverell are the sons of Garet and Darcy, unconscious lovers who are married respectively to Calpurnia and Lara. Calpurnia is a complex villainess and she has an unspoken yearning for Lara with tragic consequences. This generational curse of thwarted love reminded me of Wuthering Heights in its ghostly moodiness.

Arvin has marvelously captured the spirit of transition from the ancient religion to the new that must have been lived by the Celtic peoples of Europe before the encroachment of the newly Christianized Roman civilization. The heroes of the novel struggle to remember and to carry on the old ways in a world increasingly dominated by the new faith.  By placing the conflict in a mystical location on the edge of a contemporary world, the reader experiences that impending transition through the novel’s characters, not as historically remote, but as a current threat. Arvin has accomplished what the great H. P. Lovecraft did in his Cthulhu tales, which is to make his mythological horror seem real by placing it in a contemporary context.

The haunting question of the novel is what world was lost with the old religion and can it be re-found? The yearning of the lovers in the novel is almost like the yearning for that lost world. Arvin has created a richly complex novel that bears rereading over and over.

Readers will be delighted that the author has returned to the Valley in a prequel, Azrael and the Light Bringer, also from Wilde City Press. Like many old stories it begins with a boy waking up in a garden, an ancient orchard, a place of good and evil. The arresting cover art for both books is by Amy Morrison.

Those who follow Arvin’s fiancée, best-selling romance writer, T. J. Klune, on Facebook will know that Eric is courageously fighting for his life as this column goes to press. To Eric, I quote from Mingled Destinies, “That’s the River saying she waits for us, but not just yet.”  Not just yet, brother, not just yet.

But I have promises to keep

Mordred and the King by John Michael Curlovich (Mangus/Riverdale Avenue Books, 2013) also visits that mythical border between the world of the old gods and the emerging world of the new faith in the folk legend of the Christian King Arthur and his eternal conflict with Morgan le Fay, high priestess of the old faith.

While Mingled Destinies is set in a liminal world on the border of the contemporary, Mordred combines the rich detail of historical romance with the magic of romantic fantasy. Devotees of Arthurian legend will be satisfied with this faithful retelling of the story of King Arthur. The recasting

Mordred and the King

of Mordred as King Arthur’s young lover brings out a gay sub-text inherent in the legend (as director Derek Jarman wrote, “We are the tradition”). I especially enjoyed Curlovich’s exploration of the ancient pagan world during Mordred’s journey with Morgan to ancient Colchis. When Mordred stands upon the plains of ancient Troy and mourns the lovers Achilles and Patroclus, his sorrow foreshadows the tragedy of Arthur. The golden promise of Camelot remains the abiding hope of the West and its failure our greatest tragedy. Curlovich has perfectly captured the spirit of Arthur.

The rich cover art by Scott Carpenter perfectly captures the novel’s theme of two worlds in conflict, the emerging Christian and the dying pagan, and the internal conflict of the king who stands between the two.

And miles to go before I sleep

Dandy is a fun comic first romance from Jaidon Wells, published by Less Than Three Press. Wells says, “My favorite path for romance [is] the one that isn’t smooth, that maybe takes a few sharp twists and turns, but remains fun the whole way through” and he creates that mood through the snappy repartee between would-be lovers, university students Andrew and Cassidy, who meet in a magic shop. 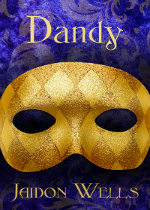 Which should be a clue as obvious as Hedda Gabbler’s pistols that the contemporary romance story line will take an abrupt turn into the fantastical. For some it may be too abrupt, but the author lays out the premise on page one:

Love was what saved you, what made you whole. Love was princes and princesses, dragons and evil queens and woodsmen with hearts of gold.  When you were in love, you were awoken with a kiss or saved from a tower, or maybe you saved somebody else from a tower or dance with them in a palace.

But you have to go through the other aspects of love to get there:

Love was drinking poison, drowning in wells, falling on a sword or into obsession with a madman. Or as Andrew discovers about love, “Mostly, it was incredibly aggravating.”

Dandy is like Christmas candy ribbons, sweet but a little hard to swallow and not entirely satisfying. Nonetheless, this is an intriguing first novel from an author at the beginning of his career who looks like he may be worth following in the miles ahead.  For more of Wells, visit smugbitchesinc.tumblr.com or read the insightful interview at The Armchair Reader.

And miles to go before I sleep 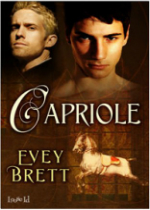 In desperation he turns to Professor Lukas van Rainer, a psychologist who specializes in paranormal phenomenon. In truth, Lukas is also a Sensitive and a Warden who hunts incubi to assist their sexually ravenous half-human off-spring. When a powerful female cambion (half human, half incubus) who is Lukas’ jealous Ward ravages Felipe, Lukas takes him to Spirit Horse Ranch in the hopes that he and the healing energy of his herd of beautiful white Lipizzan horses can help him recover.

As Lukas helps Felipe to come to terms with his past he finds himself falling dangerously in love with his patient. When he becomes aware that the young man is in mortal danger from a wrathful incubus, even the sacrifice of his own life to the burning consumption of the incubus’ lust for vengeance may not be enough to save Felipe.

The beautiful cover art by Anne Cain features a Lipizzan horse—a handsome Christmas carousel pony—performing the jump for which the novel is so affectingly named. For more Evey Brett (and her horses), visit here .