As lgbt superhero teams proliferate, it only makes sense to showcase lgbt villains too; this fun compilation of stories sets out to explore that concept. One standout story, Damon Shaw’s Light and Dark brilliantly portrays the colossal mess a superhero fight invokes (imagine blowing up the moon!). These tales feature superheroes and villains with especially imaginative super powers, like writer Rod. M Santos’ character Muse, whose power set is based on inspiring others. These stories are filled with sexiness, fun word play, and insider jokes that comic book readers will love. The introduction notes that all the writers are gay men, in order to explore a shared boys’ mythological world inspired by comics, D&D, and an awakening gay sexuality. 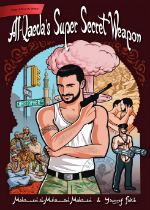 This well-drawn spoof is based on the premise that once the U.S. military has decided to openly accept lgbt soldiers, the best way for Al-Qaeda to infiltrate their enemies is to get super-sexy gay operatives drafted, and destroy the U.S. military morale with weapons of mass seduction. Readers might chuckle at the word play and sex-related jokes, unfortunately, there’s lots here that doesn’t work, from the offensive fake Arabic pen names, to the already dated feel of the premise and assumptions about gay, Arabic, and Muslim behavior.