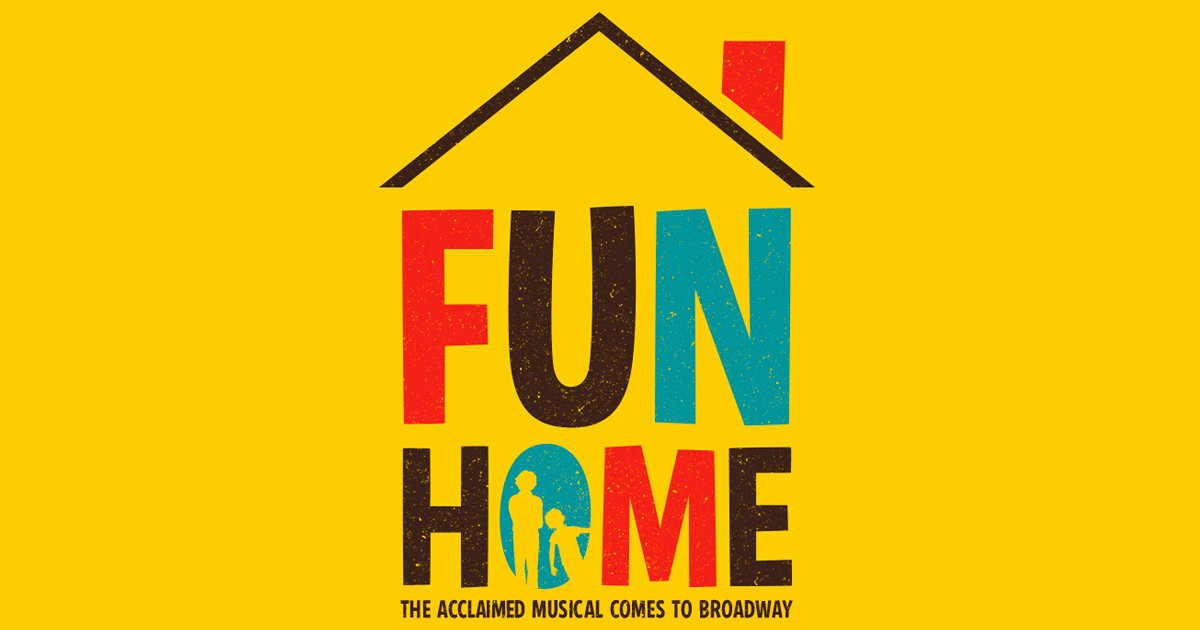 “A heartbreaking surprise,” is what the New York Times calls the first mainstream musical to feature a lesbian protagonist on the stage. Queer culture-vultures have known a musical adaptation of Alison Bechdel’s Fun Home has been in the works for years—it turns out, in the very good hands of “Five Lesbian Brothers” virtuoso Lisa Kron, with music by Jeanine Tesori, and directed by Sam Gold.

Let me be blunt: it is pretty freaking amazing to have a major musical production about a lesbian, and a butch lesbian to boot. A part of me is still a bit dumbfounded, “Did I really just see a butch lesbian on the stage of the Public Theater? Did I just watch a 100 minute adaptation of one of the most brilliant lesbian texts in the theater”

Yes, Virginia, lesbians are humans too, and they make fine universal characters.

I have to agree with Bechdel that the shock has as much, if not more, to do with the fact that the protagonist is female, largely because of the theater’s glowering disparity between plays by and about men versus those by and about women, even though women comprise the majority of the theater-going audience. “For a woman to be the center of that feels quite revolutionary,” Bechdel told New York Magazine in an interview. “We’re not used to hearing women’s stories. Even now, in this day and age, it’s still a pretty radical thing to do. And the fact that it’s a lesbian character makes it all the more difficult and all the more risky to get people to identify with her.”

Needless to say, one of the greatest pleasures of the night was watching lesbians in the audience (those who could afford the price of admission) respond to the play, with tears of joy, tears of admiration, and tears of disbelief—Finally, our story. When young Alison (played by the astounding Sydney Lucas) becomes entranced by a butch delivery woman at a luncheonette and is moved to song (admiring the butch’s short hair and “her keys”), the collective consciousness of all the queers and especially lesbians in the audience was palpable. Electric. It was a song about that moment of recognition about one’s queerness via identification with seeing someone queer for the very first time through song. When the lights went up, there was not a dry eye—lesbian or otherwise—in the house.

At Tuesday night’s “Graphic Lesbians” CLAGS’s event, Kron expressed her continued “surprise at the reception of Fun Home.” She felt there is an obvious correlation between Fun Home’s reception and the “critical mass of lesbian characters in the mainstream.” Because lesbians are indeed having a moment, especially in television, acceptance of lesbians in the public domain has been exponential; shows like The Fosters, and like GLEE, have “allowed people to look at lesbian characters as human characters.”

My eagerness to watch Fun Home was born out of my love of the graphic novel, one that I have taught to undergraduates since 2007, a year after its publication. As a literary scholar I was curious to see how Kron and her team would translate the form of the graphic novel, in addition to Bechdel’s characteristic methodical recursiveness and literariness, onto the stage, as a musical.

With the graphic novel, the interaction between image and text generates meaning, and Alison’s incessant processing of her father’s death in relation to her own coming-out is in large part born out of and signified by the text’s recursiveness and intertexuality, heavily psychoanalytic in content. While the father-daughter dyad lay at the heart of the novel, the trope of recuperation is tempered by the older Alison’s tone, evident in the gutter text, which conveys disdain through snark and witty allusions.

The concept of fidelity, at least in terms of literary translation, is impossible; the act of translation creates a separate and distinct entity.  If an original text is posited as “ground” or “truth,” then all iterations or translations can only be failures. The paradox is that all translations inevitably will be compared to the “origin(al)” text. Numerous reviews of the production thus have observed the differences between Fun Home the graphic novel and Fun Home the musical, with most reviews—notably at Slate, the LA Times, and the Wall Street Journal—focusing on the latter feeling denuded of dripping sarcasm and literary bite of the former, as a result of the striping of the novel’s intertexuality and methodical recursivity. Miriam Krule, in her Slate review, acknowledged that the constraints of the theater are largely responsible for these differences: “the graphic novel form allows for freedom from pesky constraints like linear time and geographical space; the theater.” That is, a literary text can house multiple temporalities, while performance is structured by linear time. The primary consequence of these difference, as Terry Teachout suggests in his insightful review at the Wall Street Journal, is that of tone. The “distinctive,” almost clinical, coolness of the graphic novel is “soften[ed] and sweeten[ed]” on the stage:

The dry, detached candor of her first-person narration is part of what made Fun Home so distinctive, and it is almost entirely missing from the stage version. So, too, are the jagged edges of Bruce’s personality. In the book he is a tightly wound emotional cripple whose self-loathing manifests itself in brutal verbal assaults on his wife and children. In the musical, by contrast, he is shy, scared, ingratiating and full of repressed desires to which he gives voice in song, something that the real-life Bruce could never have done. Meanwhile, Ms. Bechdel herself has undergone no less drastic a transformation, becoming in the show an adorable tomboy from whom the irony with which she holds the world at arm’s length has been stripped away.

Perhaps knowing the difficulty inherent in translation, Kron worried less about fidelity and more about communication in her adaption. “You can’t translate one form into another,” Kron noted in an interview for Slate. “You have to make a parallel work that has its own originating impulse.” Fully aware of the challenge, she determined to approach Fun Home as a piece of fiction—much like how Alison saw her parents as fictional characters—with the intent, she explained during the CLAGS’s event, of speaking “the emotional truth” of the text. For Kron that emotional truth was the primal need of a daughter desperately wanting “physical connection with her father.”

Dramatizing the older Alison—particularly the dry, erudite, and debilitatingly psychoanalytic Alison whose words comprise the gutter text of the graphic novel—was Kron’s greatest challenge. Indeed, there were moments in the play that the older Alison’s shadowing of her younger selves (both child Alison and college-age Alison) proved more haunting that psychologically reflective. The older Alison could have been omitted from the production, some may argue, with little consequence. However, this Alison’s function in the play is to make the audience aware that we are witnessing the play that is happening in her head. Here is how Kron adapts Bechdel’s heavy use of psychoanalysis: to situate the domain of the play in Alison’s consciousness. Hence the stage device of the turntable, which mimics the movement of a mind constantly ruminating, constantly circling around and back again, trying to work out and “work through” the coincidental (un)timeliness of two events (a coming-out and a death) and the relation between Alison and her father.

The most ingenious use of the older Alison (the deliciously handsome Beth Malone) is when she is substituted for the college-age Alison during the car ride scene, the final interaction between Alison and her father prior to his death. In the graphic novel, it is the college-age Alison who takes a ride with her father, during which they vaguely discuss the respective moments when they realized they were gay, and try, but fail (because Alison is underage and they are turned away by the bouncer), to go to a gay bar. 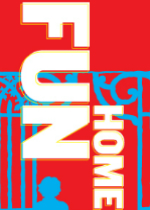 In the musical, it is the older Alison—the one who knows it is their last meeting—who takes the car ride with her father. This substitution is a cunning translation—the dramatic effect is heightened emotion. The imminent knowledge of Bruce’s death adds an element of desperation to Alison’s voice, and the audience feels that desperation, too—that sense that time is running out, which the college-age Alison of the text does not express because she simply does not have that knowledge. In this scene, the older Alison is acutely cognizant of the movement of time, a movement that she cannot stop, a car ride that she cannot make interminable. The look of defeat on Alison’s face as Bruce gets out of the car and walks away is devastating. It is this moment, and not that of the portrayal of Bruce’s death, that operates as the musical’s climactic scene.

The mood of play overall is ostensibly lighter than this scene, and the performances of the Bechdel children dancing in caskets (and rhyming words to “formaldehyde”) and the Partridge Family sendup are laugh-out-loud hilarious and wonderfully, glittery-gay. Every actor was simply fantastic. I, who admittedly have very little regard for human children, was simply blown away by the child actors—their precision of craft was jawdroppingly admirable. And, while easy to overlook because of their parts, Judy Kuhn (as Helen) and the gorgeous Roberta Colindrez (as a very different looking Joan from that of the text) were delightful; Kuhn’s vocals were on point and profound.

To say that you should go see Fun Home, whose run has been extended until December, is an understatement. Kron’s translation has infused more “fun” in Fun Home than the original, perhaps due to issues of translation, perhaps do to a desire to speak to a wider audience. My date that night predicted the musical will go to Broadway, and I’m inclined to agree.

A butch dyke on Broadway?