Joe Harding has come home after an eighteen-month tour of duty in Vietnam in Elliott Mackle’s latest Joe Harding book, Welcome Home, Captain Harding from Lethe Press. Mackle has a way of opening our eyes to the present by remembering the past. Just as our Afghan troops are recycled in and out of country for multiple tours leading to record numbers of suicides in the military, so Mackle remembers that the ravages of the Vietnam war were just as deeply etched in drug-addicted troops, civilian massacres, the war-torn streets of Berkeley and suicidal showboating pilots. Mackle has captured the era with the genuineness of someone who has lived it rather than just researched it.

Joe has been assigned to Castle Air Force Base in Merced, California under the command of his mentor and father-figure, Lieutenant Colonel Bruce “Ops” Opstein, who rescued Joe’s ass from court-martial and worse under his command at Wheelus AFB in Libya in the first two Joe Harding novels, the award-winning Captain Harding’s Six-Day War and the acclaimed Captain Harding and His Men. Joe is out to Ops in the veiled, don’t ask, don’t tell kind of double-speak required by the military until Commander-in-Chief Obama rescinded the idiot policy.

When a major air show is planned to gain some good press for the military on the besieged home front, Ops assigns Joe the delicate task of snooping out irregularities among Strategic Air Command pilots based at Castle before a major accident occurs. The assignment requires Joe to go up against a candy store drug culture at Castle. Meanwhile, Joe has some irregularities of his own in his relationship with UC-Berkeley freshman James “Cotton” Boardman. The nineteen-year-old is the son of an ambitious assistant deputy madam secretary of state and a homophobic dad with CIA connections. Add to the mix Joe’s former sex buddy from Wheelus, Sam Goldman, and Joe is walking a thin line between blackmail and court-martial. 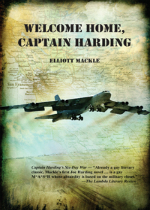 Things get even more complicated when Joe encounters senior investigator, Pete Axelrod, in the showers at a seedy Turk Street bathhouse in San Francisco. Here, Mackle delivers the Bogart brash dialogue he is so good at. He captures perfectly the language of the closet spoken even while two nude men are propositioning each other in a bathhouse shower. The black-haired-with-silver-streak and blue-eyed Axelrod approaches Joe:

“You guys put on a pretty good show.”

“Just curious. I wouldn’t have figured you for, well, this.”

“She doesn’t like me seeing other women, you know?’

“Men have needs. Unless you’re a priest or something.”

As Axelrod gropes Joe, Joe admits to himself, “I liked it a lot. And it was still a bad idea, out of the question. He already had administrative power over me. To let him dominate me physically would put me in an impossible position.” Mackle opens the closet door on the current sexual assault crisis in the military. By just saying no, Joe wonders “what penalty Axelrod would dole out for refusing to follow his orders.”

Joe’s young lover, Cotton, has gotten involved in Berkeley’s anti-war movement and when Joe follows him to an anti-war rally in Sproul Plaza that features a radical professor as a keynote speaker their picture ends up in the San Francisco Examiner and on madam secretary’s desk. When a hotel room ledger with Joe and Cotton’s names on it and another picture of Joe and Cotton rough-housing in their underwear also find their way to Cotton’s mom, it’s clear that it is payback time for when Madam Secretary Boardman shut down a CIA black ops in Libya.

The theme of family runs throughout the novel. For Joe, the Opsteins are “almost family” and Ops “was a second father figure, as caring and wise as the man who’d raised me.” When Joe’s former Wheelus sex buddy, Sam Goldman, now a pilot for TWA and married with twins on the way, arrives on the scene, Joe and Cotton and Sam discover their own Happily Ever After in the era of Stonewall. Mackle reminds us, post-DOMA, that one man-one man is not the only way to love. As Sam says, “Hey, Joe, this is family.”

Unhappily, Mackle says that this is his last Joe Harding book. We can only hope that given Joe’s undercover skills, Cotton’s mom can enlist him for covert ops over at the State Department in some future adventure. Meanwhile, enjoy Joe’s homecoming and catch up with what he was doing in Libya in the first two books of the trilogy.  For more Mackle, go to www.elliottmacklebooks.com.

David Leddick’s “autobiographical novel,” The Beauty of Men Never Dies  from Terrace Books (an imprint of the University of Wisconsin Press), is a book you should keep by your desk when you want to daydream of beautiful men and wise words and that you must never, never leave in a guest room because your guest will absentmindedly tuck it into his portmanteau and it will walk out of your house and onto the train. You pick up this book thinking you’ll skim a paragraph and find yourself reading through to the last page. He is one of those writers who make you feel wiser for having read him. 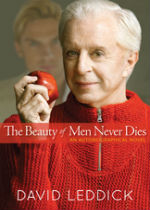 The Beauty of Men Never Dies

The mischievous dust cover photo of Leddick by David Vance shows him in a vivid red sweater and holding Eve’s shiny red apple, tempting us to take as big a bite out of life as he himself has. Or perhaps he’s suggesting the secret to his longevity, an apple a day, though, thank goodness, there’s no health advice dispersed in these pages. Leddick seems to ascribe his octogenarian good looks to luck. He writes: “God is being very good and generous to me. It makes me nervous.”

By dubbing this slim memoir “an autobiographical novel” one can never be quite certain what is imagination and what a memory. Perhaps all autobiography is fiction, but the genial wisdom contained in these pages reveals the truth of a life fully lived as a Navy officer, dancer, advertising creative director, art connoisseur, writer and bon vivant who’s lived in New York, Paris, Miami and Montevideo. Leddick is an aphoristic writer even in his straightforward fiction (he’s written some half-dozen novels) and here we are treated to whole chapters that are simply a string of delightful aphorisms. One of my favorites is from an imaginary conversation he has with God about humanity, God says to Leddick, “I have to keep reminding myself that they used to be fish.”

Although not a memoir of his love affairs, nonetheless his love affairs drift though the book like sumptuous daydreams and at the center is his contemporary affair with Fenil. Leddick writes:

“I think there is every possibility of my becoming interested in a twenty-one-year-old Uruguayan policeman. In my mid-seventies. How can I possibly do something that I find so embarrassing in my aging friends who are infatuated with much younger men?”

The affair doesn’t end well, but Leddick handles it well while it lasts. He writes about his love affairs with an unromantic honesty that is nonetheless romantic for all that, sort of like scenes from a gay Annie Hall. One senses that he is still waiting for one great final romance. He recounts his four great loves, the current being Fenil:

“And now there has been the fourth one. I used to say to him, ‘I love you very much.’ And he would reply, ‘That’s what my wife would always say.’ So I stopped saying it. So this is being over seventy and being in love with someone far younger. Does this younger lover really want you to be in love with him?”

Leddick observes, “There are no role models for gay men as they enter their seventies.” His own rather peculiar life is not so much a model, as it is an admonition or even a temptation to live your life as fully as you can, he writes:

“Then there are the aging gay couples who occupy the standard marital position of being with someone you don’t particularly care about, which makes it impossible for you to meet someone you might really care about. That’s another possible destiny.”

Despite his eccentricities, Leddick’s memoir serves as precious documentation of the life of one older gay man, a Quentin Crisp for our post-AIDS era. Leddick writes of death, of course, but these aren’t the most insightful observations in the book, although, again, because he is honest in what he does say, what he says is all the more useful to us. In one of the book’s loveliest chapters he relates the meaning of the book’s title:

“The poet John Wieners wrote, ‘The beauty of men never dies. It drives a blue car through the stars.’ If I thought dying was like rushing to meet a handsome lover, a lover who truly loves you as you do him, who will hold you in his arms and bring you to orgasm in the most thrilling manner, I’d be willing to die without a qualm. I think I will start thinking of death in that way. Start thinking of God as the handsome lover waiting for me out there in the stars.”

“Except,” he concludes, “it isn’t quite time to look back yet.”

‘She Ain’t Heavy, She’s My Mother’ by Bryan Batt
'The Albino Album' by Chavisa Woods
'Wild Fell' by Michael Rowe