The Banal and the Profane: Paige Braddock

The Banal and the Profane: Paige Braddock

“My job is to oversee the review of licensed products featuring Snoopy, Charlie Brown, and the gang, and to do some inking for various special projects.”

This month’s  “Banal and Profane” column gets a illustrated makeover from artist and writer Paige Braddock.

Paige Braddock is Creative Director at Charles M. Schulz Creative Associates. In 2001, she launched her own publishing company, Girl Twirl Comics, so that she could finally make her comic feature, Jane’s World, available to comic shops and bookstores. Now distributed by Universal Press Syndicate, daily installments of Jane’s World appear on their GoComics website. In 2006 Jane’s World received an Eisner Award nomination for best humor book. There are currently 10 Volumes of Jane’s World in print. Paige also co-created the graphic novel series The Martian Confederacy with writer, Jason McNamara.

I decided that Sunday was the day to excavate our very small and very messy garage. Despite being slightly frightened by the prospect of such a project, my wife, Evelyn agreed to help. We probably had not actually scene the floor of the garage in at least five years, BUT if I could actually turn the garage into a space where a car could reside then I could go pick up this sports car I’d been pining over for the past two years. When was it that garages became big storage units instead of a place to park your car?… Oh, here’s a knot of bungee cords that will never be untangled, oh look, here’s a portfolio containing my senior project–a self portrait in acrylic… oh, and here are the tennis shoes that were supposed to go to Good Will Industries like three years ago. Now I hate to give them away because a happy squirrel family has taken up residence in the left shoe. And somewhere down here is a fairly new, front-loading washer and dryer matched set. 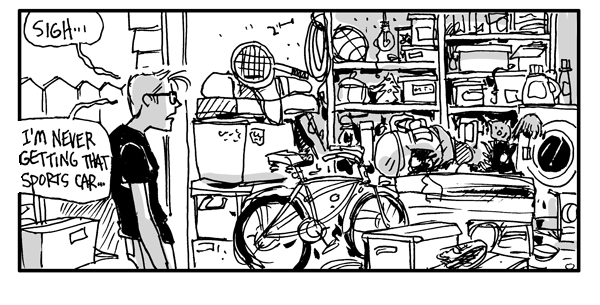 After the archeological dig we cycled over to the Gravenstein Apple Fair for fresh apple fritters. But I forgot the bike lock, so Evelyn had to stand guard while I braved the apple dunking, free-range children, and lemonade guzzling folks attending the fair.

Normally, my day starts with Olive (our dachshund) prancing around at 5:30 because she thinks it’s time for breakfast. Then it’s a cup of coffee, three minutes of news from the Today Show, a shower, and off to work at Charles Schulz’s studio about ten miles away. My job is to oversee the review of licensed products featuring Snoopy, Charlie Brown, and the gang, and to do some inking for various special projects. However, today was not a normal day….

Not only was I sore from all the heavy lifting in the garage, and the short ride to fetch apple fritters, but also I kept dreaming about the word “Ubiquitous” all-night. And then I woke up with a killer headache. I had to call in sick to work.

If you’ve ever had a migraine then you know it feels a bit like an elephant is standing on your head… and even the “click, click, click” of my tiny dog’s nails on the hard wood floors sound as loud as a wood chipper in the bedroom. But after taking a cocktail of Goody’s Headache powders and OJ, I was determined to rally.

The garage was clean and today was the day to retrieve the sports car from Marin County. About 4:00 pm PST I was in fair enough shape to assume the passenger seat, cappuccino in hand, for the drive down to Novato to pick up the Z3 roadster, which I’m thinking of naming, “Yoda.”

The phones were out at work today. That usually doesn’t bother me. I’m not really a phone person. Unfortunately, email was still working quite well. It was 11:00 a.m. before I got through all my email. We had a “concept” meeting to discuss a new themed art launch, featuring Snoopy’s beagle sister, Belle. The discussion was partly about what her stuffed, toy bunny would look like and partly about what her other accessories might be. 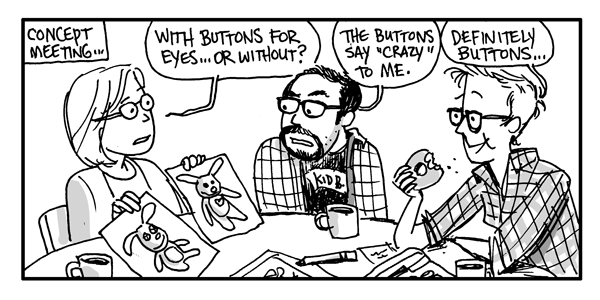 I also did some inking on artwork for a graphic novel that’s due out next spring. I use the same dip pen nibs that Mr. Schulz used to draw the comic strip. He gave me a box of them when I first started working here because it’s pretty much the only way to duplicate the line that he created. Not that anyone can really duplicate Schulz’s line work, but I try my best to match texture and thickness. These particular nibs are from the 1940s.

When this pen nib company, named Esterbrook, went out of business, Mr. Schulz bought out all their remaining nibs. They are pretty special steel nibs. They offer a varied line from extremely thin to very broad. It only took me about eight years to master the nib. Now I use them for pretty much all my inking work.

The phones are still not working but instead of no one being able to call, today the phone just rings and rings and rings and rings. It keeps ringing even after you pick up the receiver. (And yes, I wore another plaid shirt today. “Plaid” is part of the official cartoonist uniform.) 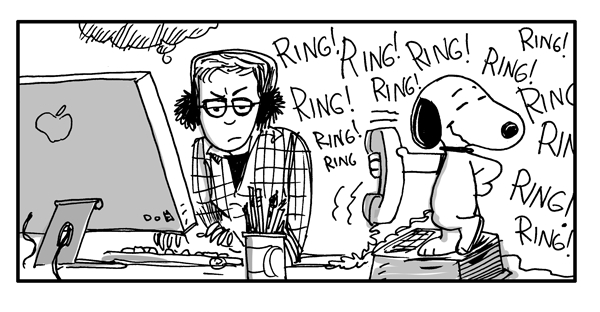 The big project I worked on today was the review of a group of submissions for an exhibit in Tokyo. This fall the Peanuts Gang is heading to Tokyo, Japan, for a retrospective exhibition of Charles Schulz’s life, the evolution of his comic strip, and a look at Peanuts storied career beyond the comic page. The exhibit is titled, Ever and Never, and it will be on display at the Mori Arts Center from October 12, 2013 through January 5, 2014. The exhibition includes over 100 original comic strips; a re-creation of Schulz’s studio; and Schulz’s personal affects, photographs, and ephemera. I’ve been working with the Schulz Museum staff to coordinate the re-creation of a ton of really cool vintage product for the exhibit. I’ll likely head to Tokyo for the exhibit opening in October. A huge chunk of our Peanuts licensing business happens in Japan so I usually go over there at least once a year.

One of my close work mates is getting married in Tahoe on Saturday, so Evelyn and I both took Friday off to drive a very scenic route to the wedding. Usually the drive to Tahoe is three and half to four hours. We took about 8 hours to wind our way on two lane roads through the Napa Valley, Grass Valley, Nevada City and then through Tahoe National Forest before arriving in Tahoe City. It was a great scenic test drive for the Z3 that I picked up Monday night.

Evelyn and I had coffee and bagels (well, I had coffee, Evelyn had Chai) by Lake Tahoe. It was a gorgeous day. The sky was very clear and blue, as was the lake. Some very happy ducks were paddling close to shore and we snapped some nice photos. Since Evelyn is an esthetician, she did Becci’s make up for the wedding and then the rest of the day was spent celebrating with the bride and groom.

Looking back, this was sort of a crazy sounding string of events. Except for the Monday headache, it was a pretty good week!

How the Movies Taught Me to Love Women Without Killing Myself
Poet Mary Oliver, 83, has Died
'Frozen Echo' by Linda Kay Silva