‘Her Kind’: A Look at VIDA’s Online Forum

‘Her Kind’: A Look at VIDA’s Online Forum

In August of 2009, writers Cate Marvin and Erin Belieu co-founded VIDA: Women in Literary Arts, an organization that “seeks to explore critical and cultural perceptions of writing by women through meaningful conversation and exchange of ideas among existing and emerging literary communities.” In May of 2012, VIDA launched Her Kind, an online forum to allow for conversation between women writers on a national scale. The forum, which takes its title from an Anne Sexton poem, is edited by two prominent female writers, Rosebud Ben-Oni and Arisa White.

Rosebud is a 2013 CantoMundo Fellow whose first poetry collection, SOLECISM, was released in March of 2013. She is also a graduate of the Women’s Work Lab at New Perspectives Theater, and her plays have been produced in New York City, Washington D.C. and Toronto.

Arisa is a poet, teacher and Cave Canem fellow. Her first collection of poetry, Hurrah’s Nest, was nominated for an NAACP Image Award. She is also the author of A Penny Saved, as well as two chapbooks, Disposition for Shininess and Post Pardon.

Rosebud and Arisa took some time to have an in-depth discussion with Lambda Literary about the role of Her Kind in the women’s literary community, the ideas and messages it seeks to promote, and how it might expand in the future.

What is the basic premise of Her Kind as an online forum? Or rather, what was the reason you started it? Was it started at the same time as the VIDA organization, or something that came to fruition separately?

ARISA WHITE: VIDA came first and Her Kind came later. Cate Marvin had the initial idea for Her Kind as an online forum for women writers—came up with the name as well. When Cate invited Rosebud and I to come on as editors, specifically for this site, she gave us the permission to form and shape the Her Kind identity and purpose.

ROSEBUD BEN-ONI: Her Kind was originally envisioned as a blog, but Arisa and I are given the freedom to shape it as something more—we see it as a Literary Community. It’s not a publication just where your work appears—we keep in touch with our writers and artists, and have them participate in events. For example, the good folks at the bookstore WORD in Brooklyn hosted a reading with myself and Her Kind writers R. Erica Doyle, Hila Ratzabi and Anne Hays. The Conversant is currently reprinting a few of our conversations, beginning with this one with Latina poets. The conversation features Sheryl Luna, who asks three questions to three Latina writers—Cynthia Cruz, Christine Granados and Carmen Giménez Smith. We want to be the roots, branches, the blossoms—all of what promotes women’s work.

Aesthetically, what kind of writing/voices are you looking for? Do you look to publish women only, or rather, any writing about women’s issues?

ROSEBUD BEN-ONI: I like receiving queries and proposals that make me look at an issue at a different angle. I look for those conversations and voices that take delicate subjects, dig into the bone and make them raw, cause discomfort.

ARISA WHITE: Brave, bold voices that are passionate about something. Writers who tell stories in interesting ways. We publish writers who identify as woman, female, girl, feminine, lady—and write from, through and within those lenses.

Could you talk a little bit more about the way the articles published on the website correspond to different sections? They are “Conversations,” “On My Mind,” “Lady in the House,” and “Global Woman.” How did you come up with these sections? How do you feel they interact with one another as a means of furthering the overall mission of Her Kind? 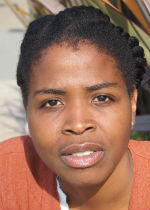 ARISA WHITE: Conversations seemed like a natural feature since we as an organization are creating and participating in cultural conversation about parity in publishing. Conversation as a way to share information, meet, talk on topics that may or may not enter your writing . . . . “On My Mind” is opinion essays; “Global Woman” is more about travel, moving in out of spaces, and the transformations that occurred because of those journeys; an invitation to our international woman writers to tell us what’s going in their part of the world. “Lady in the House” we’ve changed, more or less, into a Q&A for writers, asking about their writing process, or whatever questions we have that fit into our theme for that month. In the beginning, we asked our “Lady in the House” to write a post, but we did away with that and gave them more questions to answer.

I see each of these departments as different forms of participation that appeal to people’s comfort levels or ways they prefer or enjoy to speak on things. Having options makes it easier for people to join in on the conversation.

ROSEBUD BEN-ONI: I think each of our features adds up to the larger scope we’d like to present as Her Kind work. For instance, this convo between Aimee Phan and Julia Fierro on the realities of balancing motherhood and writing was very candid, especially when Fierro admitted that she doesn’t “always prioritize the children before work” because she has to “steal time from them.” Monique Jenkinson wrote about performing as a drag queen as a woman as one of our Lady in the House features, which opened up larger questions about identity, acceptance, belonging, gender and performance, just to name a few. And we need to be exploring these questions that reveal not only the range of women’s experiences but rethink what one holds as truth and what reality makes up the world around her or him.

How have you been working to gather content for the website and brainstorm story ideas? Do you solicit? How many editors and writers are involved, and how does the day-to-day maintenance of the site take place?

ARISA WHITE: Most people pitch content to us. We do put out calls for submissions on the VIDA and Her Kind social networks, and a listserv that we are individually a part of, and send to our former contributors. We are developing a database of organizations and groups that would be interested in receiving our call.

We are always keeping our eye out for whatever can inspire a new theme, a writer whose work we read that we think we would like to see on the site, and we are always open to suggestions.

We have three editors: Rosebud and Arisa as head editors and Holly as managing editor, and editorial intern Emily. We change out content every ten days on the site; we are all very busy bees over here. Coming up with ideas, making plans, dreaming big and practically.

ROSEBUD BEN-ONI: Recently, I came up with some themes for 2014 and drew up a working calendar, for Arisa, Holly and Emily to add their own input. Or, to be honest, sometimes on particular Wednesday night (okay, 4 AM on a Thursday morning) I will be looking at a comic book or a new Latina art or a K-Pop video commentator, and a glass of wine—(okay, a beer) is usually involved, and I’ll suddenly email Arisa, Emily, and Holly with a new idea. I have discovered that at least one of them is usually awake at that time. Sometimes we will solicit, too, that comic book writer, Latina artist or KPop commentator. And we have had great success with responses in the past.

Were there any long-term goals you were looking to achieve with the creation of Her Kind? What do you hope to see of Her Kind in the future? Do you have any new projects lined up?

ROSEBUD BEN-ONI: I’d like to see more video projects, music, even a short play feature for Her Kind. A Day in the Life series, but with a fresher take on that. Workshops in which we invite former contributors to lead; I see them as open to anyone, but also one focused on youth.

ARISA WHITE: I would like to see a Her Kind reading series—East and West. Presenting and conducting workshops at festivals and conferences across the nation. Possibly a printed publication of the Best of Her Kind.

Julie Levine is a poetry MFA candidate at The New School. She received a BA in English and Creative Writing from Emory University. Her work is forthcoming in Tar River Poetry.