The Perks of Being Uncanny: The Queer Aspects of the X-Men

The Perks of Being Uncanny: The Queer Aspects of the X-Men

“The Uncanny X-Men offered me a path forward before I even knew I needed one; each of them had to come to terms with the fact that their supposed curse was a blessing.”

Our bikes dropped on the front yard, more dirt than grass, as we bolted onto the sagging porch to rifle through my best friend’s comic book collection. We were in elementary school but old enough to have some freedoms and bold enough to taste and test their boundaries: one was riding our bikes to the limit (the limit being major highways), the other getting our hands on any comics we could find. This trip was special because it was my first sampling of another’s accumulated knowledge. We were building personal libraries, developing truths and secrets and my friend was about to share one of his: a dog-eared issue of The Uncanny X-Men, issue 120. Their plane crashes in Canada. Aliens in a hostile land, their complexities share the same genesis: they were born this way.

They were a disparate group, hunted, defamed, yet powerful. The X-Men were uncanny, colorful yet dark, different yet often able to “pass,” offering a new mythology of thrilling personal exploration. These mutants, banded together under the wisdom of the telepathic Professor X, scoured the globe, seeking out others of their kind to offer them a safe place in a hostile world.

Needless to say, I devoured every issue.

I haunted comic book shops. Every car trip was an opportunity to search small town bookstores for back issues and appearances in other Marvel titles. These were pre-sexual readings. On the most primal level I identified with the politics of otherness. I never lusted after the practically shirtless Colossus, or the pointy-eared, blue-skinned, be-tailed Nightcrawler, his teleportation leaving behind a sulfuric residue. In early issues of the regenerated X-Men (Professor X had put together a team in the 60s that was reinvented in the 70s –with an exceptional run written by Chris Claremont and stunningly illustrated by John Byrne), Nightcrawler initially disguised himself with a hologram of normalcy, but this contrivance was soon discarded. Some of us just can’t hide.

I stayed with the series through my teens. I drew my own characters, imagining their powers, devising back stories, pitting them again enraged foes. And as I matured, the X-Men transformed as well. New members appeared, like the teen Kitty Pryde, who could walk through walls and was always changing her costume. Later on the butch, untouchable Rouge joined, leaving The Brotherhood of Mutants to seek Professor X’s help. The Brotherhood represented those mutants who felt that humanity was irredeemable, led by Magneto, a concentration camp survivor. This was the 80s and I was growing up in Florida, with fruit trees in the yard, Reagan on TV, powdery beaches a quick bike-ride away. And when it became known that two hemophiliac boys in the next town had contracted HIV, someone set their house on fire.

I don’t read comics much anymore, but last summer I wandered into a comic book shop in Park Slope, to see if I could score a copy of the issue of Astonishing X-Men in which North Star gets married. North Star is a French-Canadian hero from Alpha Flight (This team of heroes also made its debut in issue 120 of the X-Men). He is the first gay character in Marvel Comics, his homosexuality a hard-fought battle won by now-writer John 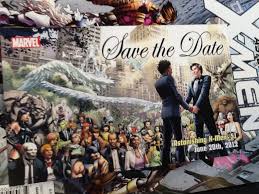 Byrne. The young men behind the shop counter told me that the issue wasn’t out yet but proudly handed me an invitation to the wedding: a glossy postcard celebrating a gay, interracial marriage cheered on by a vast number of super heroes. I could tell the guys at the comic book store were straight, and that they actually relished this moment –they not only recognized that this was a wonderful, progressive event in the comic book world, but that they, too, were a part of it.

I have enjoyed, to varying degrees, the X-Men movies, and I was thrilled that the gay director of the first two films, Bryan Singer, highlighted the queer sensibilities. In the second film, when the young Iceman comes out to his family, his mother responds, “Have you ever tried not being a mutant?” Fans love to take turns bashing the less satisfying third film, directed by Brett Ratner, (who lost a chance at producing the 2011 Oscars after stating that “rehearsals are for fags”) yet his X-Men included a memorable scene in which a youthful version of Angel, rather than sacrifice his wings for normalcy, dives out a high rise window and soars through the sky.

In my own writing I’ve often revisited the themes I first discovered in the X-Men, and have written short stories featuring mutants and super heroes. And as part of my contrary nature, with a flip of my imaginary cape to Magneto, I have also written stories that feature gay villains. Expanding on this theme, I edited a collection of stories, The Lavender Menace: Tales of Queer Villainy! – to be published later this summer by Northwest Press, wherein I invited queer comic book artists and speculative fiction writers to deliver their own dark tales.

The Uncanny X-Men offered me a path forward before I even knew I needed one; each of them had to come to terms with the fact that their supposed curse was a blessing.