The Banal and the Profane: Tommy Pico

The Banal and the Profane: Tommy Pico

“I have this bad date that gets me thinking: if you want to develop a real relationship in the city, I think it’s important to be in the path of that person, regularly, as a matter of course. You have to share a place—a neighborhood, or work or school or a commute or a coffee shop or a bar or scene. Something so the artifice of dating doesn’t overwhelm the function. “

This month’s  “Banal and Profane” column comes to us from writer Tommy Pico.

Tommy “Teebs” Pico is the driving force behind Birdsong, an antiracist/queer-positive collective, small press, and zine that publishes art and writing. Originally from the Viejas Indian reservation of the Kumeyaay nation, he now lives in Brooklyn and is working on his first collection of poetry. He’s been published in BOMB Magazine, [PANK], and THEthe poetry blog.

I don’t know anything about film. I took a course once in college called “Cinema and Society,” but the only thing I remember is being in class after having my wisdom teeth yanked out, wriggling around in my seat on Vicodin and watching Killer of Sheep. Yet somehow I’m in charge of curating a film night for the Northside Festival Wednesday.

Over the past few months I pulled together a few shorts, animations, and even a poet on the theme of “adaptation,” but I still have to write the introduction and Q&A. I really respect the artists and want to do right by them, but I have nothing, nothing, nothiiiiiiiiiing.

I’m kind of chronically late by nature, but rarely am I this underprepared. Three days ago was the release party for “the Best of birdsong“: a five year anniversary magazine for an arts collective, small press, and zine I started in Brooklyn. It went swimmingly, but designing, funding, and promoting the magazine and party gobbled up most of the past six months. There’s like a crater in my brain—moonscape—and today’s the first real day I’ve had to focus on the program material up close. I feel sort of fucked, but I think that’s part of the process.

I have come to two conclusions: 1. Worrying about not knowing “film” is work in the wrong direction. I just have to true up a reading of the material to my own perspective. 2. I want to look really cute.

Kathleen Ossip’s chapbook Cinephrastics, which she’s reading from at the panel tomorrow, “begs/ exegetes.” I think it’s about how knowledge is like a mathematical limit: that you can get closer and closer to it, but you’ll never know something entirely. To bridge the gap between knowing and not requires decisiveness. We want to be told things. What follows is belief. I use this reading to inform my “adaptation” intro and Q&A, and am satisfied with it. Fill up on enough research that I even know the animators hometowns.

My friend Maud comes over and I run outfits by her; we talk about stupid dudes and then shoot video of her reading on my roof. I’m helping her make a poetry zine called Trouble Forever. Though birdsong zine is over, I still want to help my friends make solo zines, and make video content, under the auspices of Birdsong Micropress. I’m not sure what the vids will look like, but I’m shooting a lot.

Almost no one comes to the screening, maybe two or three people who weren’t in the event description. It’s maybe the sparest crowd I’ve ever seen. My instinctual response is embarrassment, but it’s like—every writer, artist, musician, etc. worth their salt has had to kill it for a small crowd. And success isn’t dictated by butts in the seats. AND deflating now would be disrespectful to the artists whose work I’m showing.

Because there’s so few people, the rep from Northside says I don’t have to do an intro, that we can just start the program. I do it anyway, because I worked hard on it and am proud of myself. I talk about adaptation as the ferrying of ideas and feelings between minds and across disciplines, cultures, languages. It’s like translation, and even history itself: an interpretation gaining the sensibilities of a new creative mind.

We nix the Q&A because there would literally be no audience left, but afterward I’m complimented on my public speaking ability, and a co-editor of Electric Literature, who’d given me permission to screen the animations, asks if I’d be interested in writing poetry reviews for them. Making/doing things lights up new things to make/do. 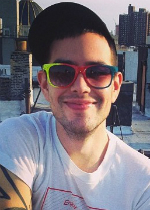 I reeeeeeeally hate online dating, but it’s so convenient when you’re up to your ears in other shit. I have this bad date that gets me thinking: if you want to develop a real relationship in the city, I think it’s important to be in the path of that person, regularly, as a matter of course. You have to share a place—a neighborhood, or work or school or a commute or a coffee shop or a bar or scene. Something so the artifice of dating doesn’t overwhelm the function. You want to get to know somebody. You want to fuck them. You want to love them. You want to be vulnerable with them. All of these are work, so the work shouldn’t have to be always finding places to meet. It shouldn’t pull you too far from your own life.

Love motivates me like no other, but so does fear. I’ve learned having readings on deck is an EXCELLENT motivator to write. This coming Monday I’m reading with my mentor Pamela Sneed, and have to prepare 15 minutes of stuff. So I begin revisions on this long poem “At One Point, There Was a Point,” which I honestly think will be my opus (full disclosure: I love a good boast). I’ve been researching the history of my tribe more and more this past year, and it’s started to sprout up into my creative work. The poem juxtaposes elements of my ancestral history with my life as this like gay Brooklyn hipster thing, in a swirling, circuitous way.

Also this Saturday is Popsickle, a daylong roundup of reading series from Brooklyn, and they asked Birdsong to introduce ourselves and send a couple readers. I chose Max Steele and Chantal Johnson to rep for us, and write intros for them and a few words about Birdsong. I mention their creative trajectories in the seven years since we moved to the city, and how they are among the smartest, most thoughtful, and talented people in the galaxy. Making/doing things puts you in the path of other people making/doing things.

Making/doing things is my boyfriend.

It’s been a year since I made the first Hey Teebs—a zine of my own writing. I lay out and print the new one, Hey Teebs: Life’s a Beach, but only have time to staple a few before Max and I and my other roommate Danny have kalimotxos and head to a radical fairy solstice music jam in a garden in the Lower East Side. We talk about Max making a new SCORCHER (his zine, which I also publish under Birdsong), release party plans, and which boys are looking at us.

Vague plans with an IRL dude fall through. I can’t tell if its a date thing or a friend thing. It’s been just under a month since my last relationship ended and I’m getting that pang like I’ll never have sex again—but I’m taking an even-keeled approach to dating. In the past I’ve tried to mastermind circumstance, be where they were, internet stalk etc. Now I’m kicking back.

I work on the long poem and leave Life’s a Beach around Bushwick and Williamsburg before heading to Popsickle. I’m late and forget my introductions. When it’s time to talk about Birdsong, and call Chantal and Max up, I wing it. I rattle off their three sentence bios from the contributors section of birdsong, but it’s not the misty-eyed intro I’d envisioned. I feel kind of defeated, but no one seems to notice, and I’ve started carrying compressed powder for when I get oily after I blush.

We head to Metropolitan, a gay bar in Williamsburg, where my friend Sam is having a birthday party. He designed a Sade pin for one of the reward tiers on my Kickstarter, so I give him that and a whiskey soda and everyone sings happy birthday at the top of their lungs. Consequently, Chantal’s bff from law school is also celebrating his birthday at Metro, so lots of friends are here on a perfectly summery night, hot and wet and in a back patio laughing. I think: enjoy this, enjoy this, enjoy this.

I practice my long poem a lot, try to get to a point just before memorization, and go to Staples with my other roommate Jess. She’s a musician and social worker and cat whisperer and life coach and psychic and artist. She spent a year making collages that she wants to turn into a zine. I show her how to lay it out and how to fold them. We’re there for hours and hours, getting it just right, and walk back home in the 90 degrees talking about our mothers, gin & tonics, and the therapy of making and doing things. She and I and Diego (fourth and final roommate) watch the entire Pretty Wild series while I stuff envelopes with magazines and buttons, getting ready to send rewards to the first group of Kickstarter backers.

My father is chairman of the Indian reservation where I’m from. When I was young he would say “someday our ship will come in.” My mother, an artist, would say, “sorry for the genes.” Tonight I’m feeling very both of those things.

Pamela and I featured for louderARTS in the city, and pretty much killed it. Her poetry is like the discovery of DNA, impossible to think about life the same way afterward, and I wasn’t too shabby. Some good friends came, I gave out lots of zines, and feel accomplished but antsy. Immediately after getting home I make a list of things I want to do next: manuscript, film school, Tokyo, love, etc. Then a list of things to do this week. Then a list of things I want in a guy. Then lists of things we need for the apartment, etc. Full disclosure: I have occasional insomnia. I get this feeling that there’s always something to be made or done—which isn’t fun when it’s time to power down. I’m also descended from a people motivated by cyclical drought in Southern California. Maybe I’m genetically restless?

I’m trying not to get frustrated with myself when it happens. Tuck in with my new obsession (True Blood, can’t stop). See if sleep happens.

'Delicious Foods' by James Hannaham
Book Lovers: Places I Read About on My Summer Vacation
'The Aversive Clause' by B.C. Edwards