Rob Kirby: Drawing Outside the Margins

Rob Kirby: Drawing Outside the Margins

“Though I’m not some badass rebel underground punk, I’m not really in the mainstream of society either, and never have been. “

Rob Kirby is a prolific, imaginative cartoonist who’s made a huge contribution as both a creator and curator to LGBTQ comics. His early work includes editing the Boy Trouble zines. He put out three books of Boy Trouble comics (Boy Trouble #5, The Book of Boy Trouble, and Born To Trouble; The Book of Boy Trouble), the first of which was funded by a Xeric Grant. His strip Curbside ran for years in gay papers, and was compiled into 2 books Curbside and Curbside Boys. More recently, he’s put together three compilations highlighting three different LGBTQ artists in each, called Three which was awarded a Prism Queer Press Grant. He’s also done a bazillion comics, reviews and blog posts in between.

Kirby was one of my best buds from when I too lived in Minnesota. For several years, we met every Saturday morning to write, but also to chat and collect quotes we loved. Our writing even shares some of the same characters (some future doctoral student studying comics will have a field day with that – trust me!). When I look at my notebooks from back then, the pages are decorated with Rob Kirby doodles and sketches. It makes me smile. I was thrilled to get this chance to interview him and find out what he’s been up to.

So I just read an Agatha Christie quote that said, “The popular idea that a child forgets easily is not an accurate one. Many people go right through life in the grip of an idea which has been impressed on them in very tender years…” What (or who) influenced you when you were young to start, and to continue to draw comics?

I have this list of artists and writers from childhood and adolescence that have attained a sort of holy status in my life. They range from Charles Schulz, whose strip made me want to become a cartoonist at a very young age; to the writer Shirley Jackson, who was the first writer with whom I ever became obsessed, wanting to read every single thing she’d ever written; to the film critic Pauline Kael, who validated my penchant for analyzing art and made me want to look at films, books, etc. as deeply and passionately as possible to see what makes them tick.  And then there are any number of other cartoonists, artists and writers, and many books and films, etc. that hit me hard but let’s stop here, because you know I could go on about them all night.

You’re right – that could be the whole interview! We’ll get back to quotes a little later, I promise. But let’s talk about Curbside – your comic was serialized for years in gay papers, and featured enough comics to be compiled into two books. I always thought it was cool that you featured your real self in these comics, hanging out with your fictional characters. How and why did you come up with this approach?

When I finally started cartooning I found it easiest to write and draw about myself, thus Curbside began as an autobio/slice of life strip.  Later, in 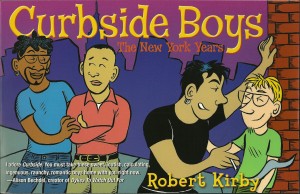 an effort to stretch myself creatively, I came up with the characters Nathan and Drew, who were the core of what became my book Curbside Boys (Cleis Press, 2002).  Nathan and Drew are autobiographical also, as are most of my characters; they’re just different, fictionalized shades of myself. Through them I was able to channel a whole lot of bittersweet twenty and thirty-something personal experience into a good, hopefully resonant story. I kept Rob the character around as a sort of voice of conscience for Nathan, as well as for the sake of continuity. Plus I have a lot of affection for Rob-as-a-cartoon-character, obviously.

I don’t blame you; I was thrilled I showed up in a few of your comics as well. So recently you posted on your Facebook page “Support group needed for gay male cartoonists who have difficulty drawing big muscle-y guys. I have to work to not make them look like mutants, like the Michelin Man.” Could you explain how this frustration shapes the path of your comics?

(Laughs) I actually posted that with tongue firmly in cheek, but yeah, it did get quite a few “likes” and generated some conversation, particularly from the majority of my gay male FB friends. Apparently this is something we all grapple with, though some of my peers stated they have the opposite problem, that drawing skinny guys is their challenge. My line tends to be slender, bendy, rubbery & flowing; it’s hard for me to accomplish that gracefully with muscle-bound figures. I suppose I also like to challenge the status quo and avoid idealized images as much as possible. Muscle guys are great but other body-types are as well. Body image issues are rampant in the gay community, big surprise, huh?

The underground and the small presses level the playing field to include anyone; anyone who wants to can participate in the DIY experience.  I’m grateful for having had self-publishing as an option, as a launching pad. I’ve made some good friends through the small presses and found much literally life-sustaining creative inspiration here. I’ve published only very sporadically with more mainstream presses but that’s okay.  Though I’m not some badass rebel underground punk, I’m not really in the mainstream of society either, and never have been.

So back to quotes, I know one you really love is from Chuck Close, “Inspiration is for amateurs. The rest of us just get up and go to work.” What about this quote resonates with you?

Well, we’re all such tender, sensitive artist souls, aren’t we? It can become very easy to sort of crawl up your own ass and wuss out, romanticizing your Great Artistic Struggle. Close pops that balloon with gusto: “knock it off, quit waiting for your precious inspiration and just do it!” He knows that it’s simply by doing your job as an artist and mucking around, playing with things on the canvas, on the page, on the stage or wherever, that that is where your inspiration will come. It really will. But still I have to relearn this lesson constantly—just last week, as a matter of fact. Recently I read this memoir by Edmund White’s nephew, Keith Fleming; in it Fleming stated that White himself has no patience for that particular “Too sensitive for this world” artist’s canard.  Myself, I try to avoid such histrionics, which is not to say that creating can’t be stressful, especially as you’re trying to balance the artist’s life with real world responsibilities and relationships. Achieving that balance is to me the real struggle.

Another quote I love – I think you showed it to me first – which to me speaks to the importance of daydreaming to creatives of all stripes: “My best office is my bed.” -Phillipe Starck 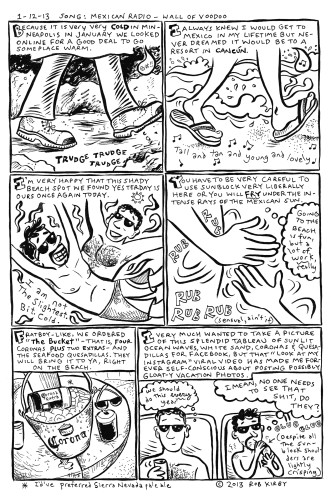 I remember that one too. That’s why the official uniform of writers and artists is pajamas. Along with your own work, you’ve put out some amazing compilations, the Boy Trouble books, and more recently the Three series. What do you get out of creating these books that you don’t get out of doing your own work?

Cartooning, writing and drawing are inherently solitary activities. Interacting on the pages of an anthology creates not only community and camaraderie but also generates stimulus. It makes me really happy that many of the Boy Trouble boys are still in contact with each other after all these years, supporting one another and hanging out together, whenever possible.

And you know this is a good place to repeat one last favorite quote. This one is from Dylan Williams of Sparkplug Books, who died in 2011. He really spoke to the core of what is to be gained from gathering artists together the way he did:

“The thing is, if people are going to exclude you then fuck them. Do it your way. And if you are ever in the position to exclude others, try not to. Encouraging people is like the greatest feeling in the world. It gets rid of all that selfish shit that just ends up hurting everyone.”

So what are you working on these days? Anything new in the works?

I recently released a little solo zine of recent diary comics and other autobio vignettes called Snack Pak, which I’ll be formally debuting at the Toronto Comics and Arts Festival (TCAF) in mid-May. My Rob cartoon alter-ego is totally back on the scene again! I also have another little anthology zine in the works for a fall release at the Small Press Expo (SPX) called TABLEGEDDON, which will feature about 15 cartoonists, gay and straight. TABLEGEDDON is very much an insider’s comic, all about the various humorous aspects of exhibiting (or tabling) at the many small press alt-comics expos that have been springing up like mushrooms all over the country and really, the world in the past few years. As the print medium evolves and as more and more bookstores are closing their doors, these expos are becoming a vital link for us cartoonists to sell our work and interact with our fans and readers. So naturally, many funny anecdotes spring out of these conventions and many of the contributors leapt at the chance to tell a story or two for me.

But the big project hurling down the pike later this year is QU33R, an all-color 33-person anthology I’m editing to be published by Zan Christensen’s Northwest Press. QU33R will feature a cross-generational lineup up of gay men, lesbians, bisexual people and transgender folk including many of our forebears like Jennifer Camper, Howard Cruse, and Ivan Velez Jr, as well as folks who, like me, got their start in the early 90s, like Diane DiMassa, Kris Dresen, Michael Fahy, David Kelly, Jon Macy, and Carrie McNinch; heading then into the generation that sprang up in the late 90s and the new millennium, among them Justin Hall, Ed Luce, Steve MacIsaac, MariNaomi, Annie Murphy, Jose-Luis Olivares, and Marian Runk. I think of QU33R as a sequel to Justin Hall’s great No Straight Lines from last year: whereas that book set down our history, I hope for QU33R to shine our light here in the present and towards the future.

[All images by Rob Kirby]