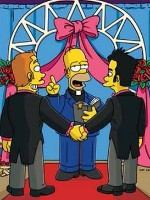 How ‘The Simpsons’ Gayed Up America: A Visual Queerstory

In Behind the Gay Jokes: Homosexuality in The Simpsons, author Erwin In het Panhuis examines queerness in the long-running cartoon series The Simpsons, identifying 70 LGBT characters and 490 gay-themed scenes along the way. Through its common treatment of homosexuality, In het Panhuis argues, The Simpson contrasts more hostile views of the subject often expressed in the media.

Preview a few of the queer scenes and characters analyzed in the book here.

This month sees the release of artist David Rakoff’s last written work before he passed of malignant sarcoma in August 2012. Love, Dishonor, Marry, Die, Cherish, Perish is a 128-page novel penned in rhyming iambic pentameter that spans from “turn-of-the-20th-century Chicago to midcentury Manhattan to San Francisco at the height of the AIDS crisis, and then to the near-present.”

In his graceful and moving essay, Joe Lovell of The New York Times discusses the year and a half Rakoff spent writing the novel – from the pitch made to his editor, Bill Thomas, in late 2010 to the audiobook recordings made two weeks before Rakoff’s death.

“What is so special to me about the book,” Mr. Thomas said, “is that it is the purest distillation of David’s belief that we live in a world that is essentially cruel and indifferent, but there are remedies for that. And the remedies are kindness and beauty. It’s very clever and erudite, and it’s very, very funny, as David was, but fundamentally it is a brief for kindness.

“I told him that this was the best thing he’d ever written,” he continued. “David was his own worst critic to a fault, but he said, ‘I know it is.’ Which was not like him.”

Old Growth Northwest, a nonprofit organization that builds resources and fosters community for local writers in the Pacific Northwest, will be holding a conference on gay romance fiction at the Seattle Central Library on Saturday, September 14 from 1-5pm. The conference will be open to the public and feature panel discussions with gay romance writers and publishers from around the region, followed by Q&As with the audience and a post-event happy hour. Over 25 gay romance authors will be in attendance, including Lambda Literary Award winner Nicole Kimberling.

And if you can’t wait until then, Old Growth Northwest is holding three free public reading events with conference authors this summer at Seattle’s University Bookstore. The first reading on July 25 will focus on gay romance in speculative fiction and will include readings by Lambda Literary Award nominees Ginn Hale and Astril Armara.

Check out future events and learn more about the conference at the Old Growth Northwest website.

Image via the Simpsons