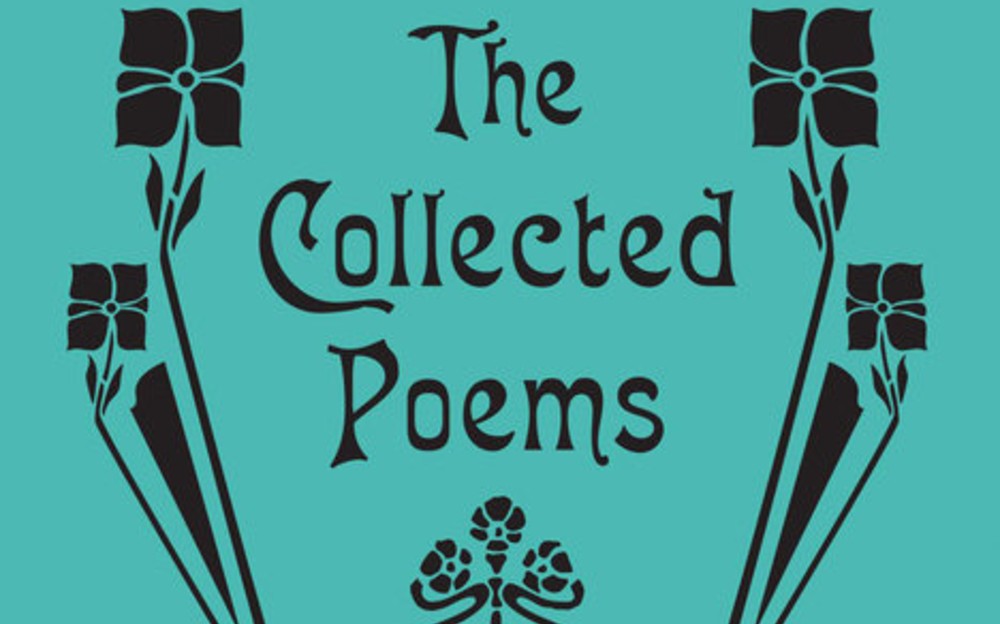 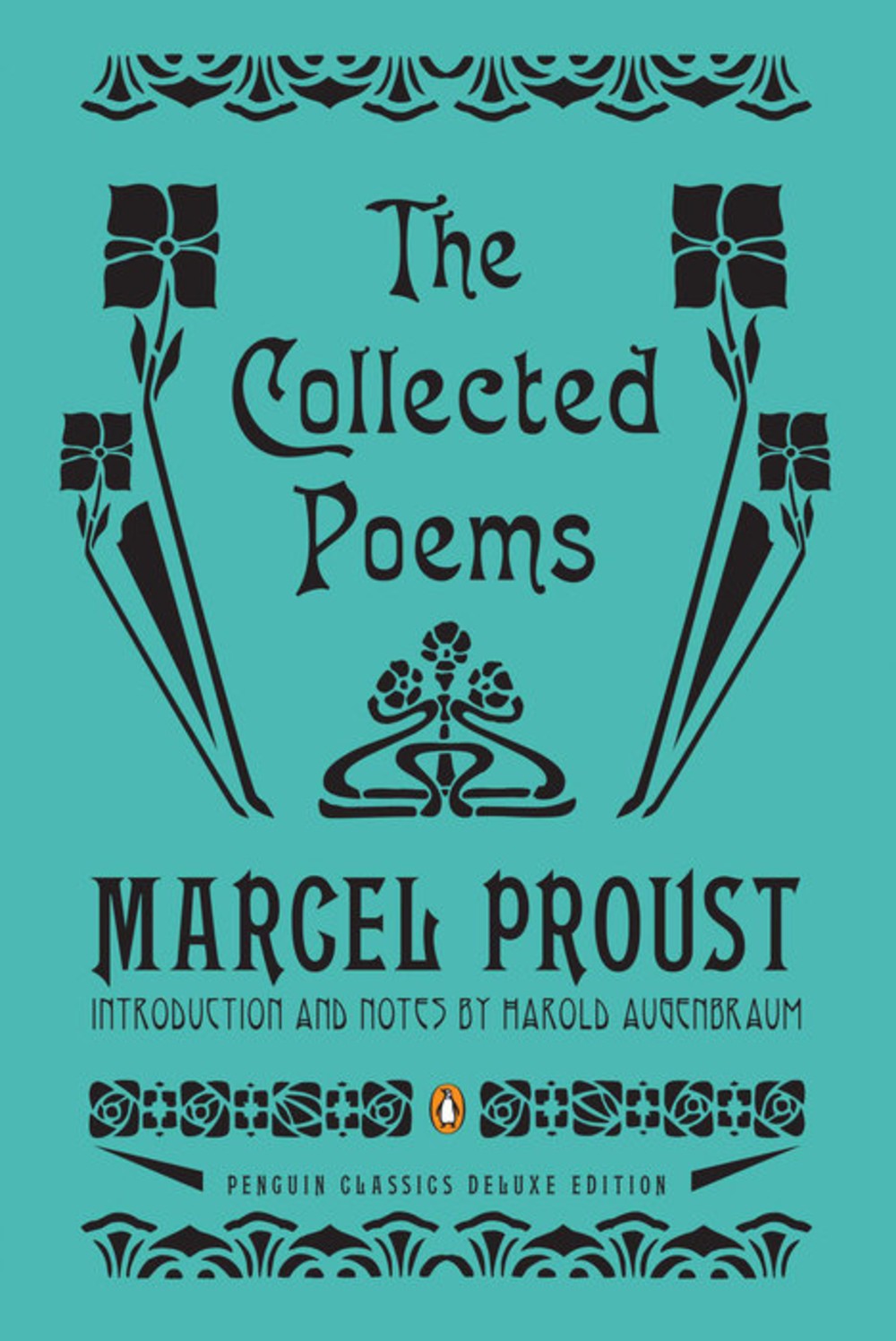 Anyone who takes on Marcel Proust: The Collected Poems (Penguin Books) would do well to understand certain approaches to Proust’s work in general, one literary and the other biographical. On the literary side, it’s helpful to know that in his magnus opus, Remembrance of Things Past (RTP), Proust synthesized the novel and the memoir; and that, further, he sought to synthesize the novel with other arts—music and painting in particular. In this way, he hoped to get at the senses, at memory itself, and that is why the fragment of a melody plays such a pivotal part in the actions and inner life of a character in RTP. It is also why the one scene from the novel someone is likely to know is the one in which a madeleine being dunked in tea stirs up, for the narrator, a flood of memories. Indeed, as Edmund White has written, “Proust was never afraid of creating a highly aestheticized atmosphere. In fact he intensifies the aestheticism to such a point that it becomes an incontrovertible element of his style.”

Thus we come to a poem like “Albert Cuyp I.” The title refers to the Dutch painter Albert Cuyp, and it is an ekphrastic poem (a poem which takes as its inspiration a painting):

The sinking sun dissolves into air so clear
a flight of doves ripples it like a pond;
a sort of halo guilds birches, guilds bulls!
while bluish incense blurs the hillside, and
splendid quagmires stagnate in the sky.
Riders, mount! Pink plumes are tossed
by busts that swell the prodigal blond curls
and bring the same pink to every cheek.
Lured by glowing fields and creeks, they trot
past indifferent herds of oxen and wrapped
in a golden mist of sleep—galloping now,
breathing the timeless minutes, breathing deep.

Lovely description of a painting, isn’t it?—one in which we get a sensory experience much like the one the painter must have gotten when he sat before his canvas. Highly aestheticized, isn’t it?—not only by virtue of its subject matter but by virtue of its elevated style, its use of language and rhythm.

“Albert Cuyp I” was set to music by the composer Reynaldo Hahn during Proust’s lifetime. Proust and Hahn were lifelong friends after they grew apart as lovers, which brings us to the biographical. Early in his adulthood, Proust had a number of friends/lovers who were also artists, socialites and intellectuals. Proust was a notorious socialite himself and many of the characters in RTP are amalgams of the society people, homo- and heterosexual, he knew and associated with, including himself. Indeed, in Marcel Proust: The Collected Poems, much of what we get are poetic missives and inside jokes Proust enclosed in letters to various members of his coterie, often pastiches and satires of their characters. These poems, then, weren’t necessarily meant for a wider audience. Take, for instance, “Acrostic”:

Bathe in your gaze the Universe fraternal
Immerse beings, things, as your Desire goes
Brandish the mountains as one throws a rose
E’en your Godly gesture wounding a mortal
So your enchanted eyes will tint rose
Certainly he who modestly saw your future as seer
Oh keep for him at least a sweet souvenir.

The first letter of each line, read down, spells out the name of one of Proust’s friends, Bibesco (prince Antoine de Bibesco of Romania). “Acrostic” is an exercise in a poetic form—the acrostic—one in which we can, yes, sense the love and desire Proust felt for Bibesco (Bibesco was straight but queer-friendly). The problem, though, is that if you didn’t know who Bibesco was, you’re at a loss.

The notes aren’t always much help. Many of the poems have many notes and you can read and reread the poems and the notes as much as you like, but, again, because these poems are intimacies between friends, you won’t generally come away with a larger, universal meaning.

Penguin allowed each of the translators of this collection to translate as they saw fit. Some translators stuck to Proust’s rhyme schemes, others didn’t, and that’s fine. However, another approach to this project might have been to select the best poems Proust left behind and end up with a lot less notes, allowing the reader to have less fragmented reading experience. (By the way, gay poets Richard Howard and Wayne Kostenbaum are among the many blue-chip translators.)

Finally, I know 2013 is the centennial anniversary of Swann’s Way (the first weighty volume of the seven-volume Remembrance of Things Past) and that there’s a lot of general interest being created by that milestone. But it seems to me that when you have a Proust scholar and a experienced translator like Harold Augenbraum writing the introduction, you might encourage him not to cave in to that enthusiasm too much. You might discourage him from referring to Proust as “Proust the guy” or describing these poems as “sexed up.” I mean, some of these poems are sexed up, but to describe them and characterize them in that way, when you have the opportunity to critically assess Proust’s poetry, comes across as pandering to consumerism—opportunistic consumerism, at that.

Okay, so, since I’ve referred to the sexed-up quality of some of these poems, I’ll not be too much of a tease. I’ll leave you with a taste, though just a taste, of just such a poem. The poem is Number 53 in the collection (it has no title) and begins like this:

They say a Russian, may God preserve his soul,
Managed to rouse a flutter of sensation
In Ferdinand’s leathery, tanned, and well-worked hole
By slipping in up to the hilt his brave baton.
May fire consume to ash and coal
My last rags and belongings to all
If I were a poet, I would tell
To a wide-eyed crowd the marvel
Of this flabbergasting tool.

'The Year of Needy Girls' by Patricia A. Smith
We Had No Rules Defies Expectations and Takes Readers to Uncomfortable Places
6th Annual Lambda Literary Awards