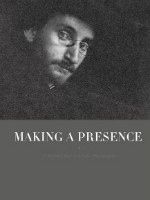 It’s an ingenious conceit for an exhibit: take a photographer best known for his portraiture and focus on the portraits that others made of him. What can be learned about such a photographer’s life and art from this technique?

Such is the conceit pursued in Making a Presence: F. Holland Day in Artistic Photography, which has just concluded its 13-month run at three different art galleries, most recently the Sheldon Museum of Art at the University of Nebraska.  Organized by independent art curator Trevor Fairbrother, who also wrote the catalog essays, the exhibit was extraordinary in gathering a host of photographs, many previously unseen, by and of F. Holland Day (1864-1933).  Day, a Boston-based Pictorialist photographer who used his independent wealth, curiosity, and talent to make a host of cultural contributions—in bookmaking, publishing, collecting, photographic criticism, and a stunning body of photographic work—went from being one of the best-known names in artistic photography to a largely neglected figure following his withdrawing from consistent exhibiting in the early 1900s. Only in the last 30 or so years, commencing with the publication of the first biography of Day, Slave to Beauty (1981) by Estelle Jussim, has this ignorance of his work begun to crumble. 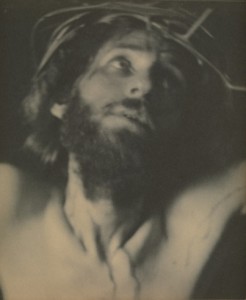 “Father, Forgive Them for They Know Not What They Do”

In both the exhibit and its accompanying catalog, Fairbrother makes a valuable contribution to an increasing body of scholarly work that attempts to understand and assess Day’s life and career. I had the privilege of seeing the exhibit last July, during its opening run at the Phillips Academy’s Addison Gallery of American Art, and Fairbrother’s loving care in structuring the layout of photographs and personal objects from Day’s life was obvious.  The center of the exhibit, which also forms a central sheath of photographs in the catalog, is a collection of portraits of Day by some of his closest photographic colleagues and friends, including such luminaries as Alvin Langdon Coburn, Frederick Evans, Gertrude Kasebier, Edward Steichen, and Clarence White.

One of the questions hanging over Day’s whole career and subsequent critical reception, then, is how did someone so well-connected in the photography world and so skillful—Day’s mature mastery of lighting and composition is still among the greatest in photographic history—disappear almost completely from note for seven decades? Fairbrother provides a summation of the issues that confronted Day and his work, many of which involve changing fashions in photography. Day’s work as a Pictorialist and his “desire to depict historical, mythological, or metaphysical subjects”—including a large-scale reenactment of Jesus Christ’s crucifixion, featuring Day himself in the starring role—“led him to make aesthetic choices that some have deemed deficient in taste or judgment.” 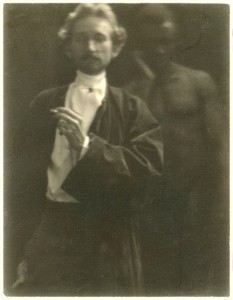 While Fairbrother’s discussion of Day’s participation in these politics of the photographic world is more than solid, he raises another possible reason for Day’s critical neglect, only to fail to discuss it in the depth that it deserves: Day’s homosexuality and its influence on his work. It’s a missed opportunity. The question of how Day’s homosexuality colored much of his photography (and what connection that has to longstanding prejudice surrounding his work and its discussion) has been little mentioned. (A notable exception is the introductory essay to F. Holland Day: Suffering the Ideal, James Crump’s 1995 coffee-table book.) As Fairbrother writes, “There is abundant circumstantial evidence, from Day’s art to his circle of associates, to indicate that he was emotionally attracted to, and perhaps personally intimate with men.  In keeping with the restrictions of his era he cloaked his sexuality, and writers have tended to use that as a reason to be reticent on the topic.” “Reticent” doesn’t go far enough as a descriptor; one of the main researchers and writers about Day, Verna Posever Curtis, has repeatedly accused those who would examine Day’s sexuality and its influence on his work, of “prurience.”  This refusal to recognize a legitimate line of inquiry can only be described, from a scholarly viewpoint, as obscene.

To his great credit, he is the first writer to consider the possible “sensual appeal” of the sailor suits that appear frequently in Day’s later life and photographs. And while a few writers have discussed the influence of Edward Carpenter, the English socialist and apologist for homosexuality, on Day’s life, Fairbrother is the first to specify that influence’s homosexual side (including the detail, which has not been previously published in the scholarly literature, that Day financed one American edition of Carpenter’s Ioläus: An Anthology of Friendship, which was colloquially known as “the Bugger’s Bible” for its poetry of male romanticism).

Unfortunately, Fairbrother, too, misses a striking opportunity to address issues surrounding Day’s homosexuality in sufficient depth. For example, he mentions in passing Day’s late-career series of photographs of Orpheus and of Saint Sebastian without considering the homosexual connotations of either figure, or the iconographic connections between those photographs and Day’s earlier Crucifixion series. Day’s lack of traditional manliness, his theatrical flair, his love of playing “dress-up” in a variety of costumes and guises, his connection to the English Decadents, quotations that talk about Day’s photography being “pagan” (a frequent code-word for homosexuality during the era) or having a “purely Greek point of view”:  all receive mention, and any or all of these topics would be of great interest in the catalog for an exhibit dedicated to its subject’s appearance and self-presentation.  Regrettably, none of these threads are followed in any particular depth.

Perhaps, though, this is unfair. Not only was the exhibit visually dazzling, but Fairbrother’s essays are suggestive in the best way. They point out many further avenues for scholarship surrounding Day’s photography. They are also the first to contemplate seriously the remarkable number of photographs taken of Day and to consider how the poses he struck in those portraits contributed to his public and artistic persona. The catalog is therefore a welcome supplement to Patricia J. Fanning’s recent biography of Day, Through an Uncommon Lens (2008). While F. Holland Day retains many of his mysteries, works like Fairbrother’s continue the process of making sense of the available clues.

Photos:  “F. Holland Day with Male Nude”  by Clarence White via the Metropolitan Museum of Art;  “Father, Forgive Them for They Know Not What They Do” (self-portrait) by F. Holland Day via Library of Congress