It’s Raining Men (Dreamspinner Press, 2013) for Bobby Nelson in this superb sequel to Rick R. Reed’s best-seller, Chaser, and though Bobby’s hot looks (he describes himself as “fortunate”) and horn-dog attitude keep him awash in men, his soul is as dried up as a desert lake bed. Fans of the popular Chaser may remember Bobby as the kind of romance villain everyone loves to hate and Reed’s challenge in this sequel is to redeem someone so low that he’d try to steal his own best friend’s boyfriend. Raining Men finds a newly chastened Bobby on a therapist’s couch and though he seems to understand that what he really needs is “somebody to love me,” he is far from hitting his bottom in his search for what he thinks he wants–the next hot dick.

The crisis comes, as it does in Chaser, through a family emergency when Bobby has to fly home to Seattle when his father dies. Home is where the forty-year-old Bobby “was not the confident, successful, handsome, well-built man he was now, but a scared little boy.” Running away from the ghost of his emotionally abusive father, Bobby ends up at one of Seattle’s sleazier bathhouses. The next day at his father’s funeral he runs into an old high school acquaintance, Wade Carlisle, an ugly duckling who has metamorphosed into a swan. Bobby puts the make on him, but Wade, who witnessed Bobby’s debauchery the night before while volunteering as an AIDS safe sex educator at the bathhouse, says he’s waiting for a better offer. 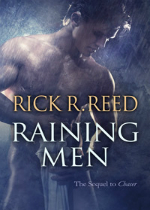 Returning to Chicago, Bobby tries to pick up where he left off as a “sexually active gay man. Young, single, handsome, and on the prowl.” But a series of disillusioning sexual encounters brings him to Sex Addicts Anonymous and he slowly begins to understand that all the sex is “a smoke screen for something missing in his life.” In one encounter, Bobby hooks up with a former trick who is now in a committed, but open relationship. But in a sleazy aside, the man’s lover invites Bobby for a secret tryst giving the lie to the couple’s openness and their commitment. Luckily, Bobby finds a new best friend in his relationship with his SAA sponsor, Aaron Shaw, a man who is emotionally involving, frankly sensual and pleasantly humorous. Here Reed gets it just right, because Aaron’s sexuality is affirming, but not compulsive. As Bobby grows to “become a more centered person, someone he actually liked,” we like this new Bobby, too.

Then Wade visits from Seattle. This guy looks like a young Christopher Reeve, he is charming, kind, a good cook, helps around the house and Bobby begins to loose his balance. But this time it’s love, isn’t it? Reed places the two in a series of classically romantic moments that feel like an HEA is going to burst out into song at any moment. Yet, the old Bobby is still thinking “if things don’t end up immediately in bed with a guy for whom you have feelings, then there must be something wrong.”  Aaron counsels him to follow his heart. But to grow into his full sexual maturity, Bobby must still face another emotionally devastating encounter with “the unquenchable fire of memory” of his father. The emotional beauty of Reed’s language will leave many a reader with a tear stained Kindle screen. Bobby earns the novel’s Happily Ever After.

While this is a romance novel and deals with the personal cri de coeur of one man, the power of Reed’s writing is his ability to provoke deeper discussions about the meaning of gay sexuality in a popular genre like romance. Coming out just before the Supreme Court decision striking down DOMA, Reed’s novel almost serves as a fictional commentary upon that decision and the meaning of gay marriage for our community.

Gay men have historically seen the communal dimension of gay sexuality (i.e. non-monogamy) as psychologically healthy and socially liberating. But with the advent of AIDS and the marketing of the gay movement in the 90s (After The Ball: How America Will Conquer Its Fear and Hatred of Gays in the 90s by Marshall Kirk and Hunter Madsen, Plume, 1990), monogamy within a committed relationship has become the new model for gay sexuality. Gay promiscuity has become re-medicalized as a mental health issue that at the very least is a sign of emotional immaturity and at the worst is a psychological pathology that requires treatment or “recovery.” Most major cities have crowded gay Sexual Addicts Anonymous groups. Of course, the demands of the romance genre require a Happily Ever After, but Reed seems to embrace monogamy as the model for a healthy gay sexuality in Bobby’s journey to wholeness.

Michael Warner, in The Trouble with Normal (The Free Press, 1999), questions if the normative heterosexual pattern of mandatory monogamy fits gay sexuality. Studies suggest that the majority of gay couples are non-monogamous (McWhirter and Madison, 1984; Hoff, Beougher, Chakravarty, Darbes, Neilands, 2010). Reed gives Bobby one choice monogamy or shame. But surely, in our lived gay experience there is more. Non-monogamy far from being opposed to love is a public expression of a loving community that cannot be confined within the privatized relationship of marriage. The AIDS crisis, far from disillusioning that vision proved the nobility and commitment of a community of lovers, “in sickness and in health.”

On the other hand, popular genres like romance give expression to our cultural ideals, even if we don’t live up to them in reality. Certainly it would be unfair of me to criticize Reed for idealizing romantic love in a romance novel! But more to the point, the very popularity of gay romance—and it consistently outsells gay literary fiction—shows that despite sociological realities, the gay ideal remains the one, true HEA relationship found in most gay romance. Gay conservative thinkers, like Andrew Sullivan in Virtually Normal (Vintage Books, 1996), would argue that with the advent of legalized marriage, the HEA ideal as expressed in our romance novels will become the new gay reality simply because it is what most gay men want; we’ve settled for less only because we’ve been told our relationships are second-class. Raining Men’s three word last line reads true in this very personal romance and contains an even larger significance for our community.

'Burn It Down: Women Writing About Anger' Edited by Lilly Dancyger
'Silver Kiss' by Naomi Clark
‘Petticoats and Promises’ by Penelope Friday