Watch The Trailer For HBO’s Documentary: ‘The Out List’

Watch The Trailer For HBO’s Documentary: ‘The Out List’ 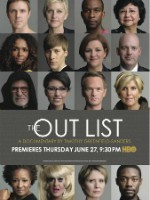 This June HBO will be releasing their original documentary, The Out List—a film depicting the personal struggles and triumphs of a powerful group of individuals in today’s LGBT community.

Alternately humorous and poignant, The OUT List features a diverse cross-section of accomplished leaders from entertainment, business, sports and public service sharing intimate stories on childhood, understanding gender and sexuality, building careers while out and reflecting on the challenges still facing the LGBT community. Against the backdrop of historic Supreme Court hearings on same-sex marriage and financial equality, subjects recall joyous moments of acceptance and romance, along with painful instances of intolerance and discrimination, offering unique modern perspectives on being out in America.

Jacob Anderson-Minshall, the first transgender author to serve on the Lambda Literary Foundation board, reflects on the tremendous progress the organization has made over the past decade in representing all members of the LGBT community, along with the steps we must continue to take to foster and improve our recognition of diversity within the literary arts.

In many ways Lambda Literary was actually founded to recognize and honor diversity. It was the first awards ceremony that specifically honored gay and lesbian — and later, bisexual and transgender — authors and their work…As always, there’s still much more to be done. We cannot rest on our laurels; having the first of something is never good enough. You have to also have the second and third. And there are many other milestones still waiting to be reached. [Advocate]

Founded in 2003, Words Without Borders is an international magazine that “promotes cultural understanding through the translation, publication, and promotion” of contemporary literature—having previously put out works by Nobel Prize winners,  J.M.G. Le Clézio and Herta Müller, as well as prominent writers such as Mahmoud Darwish, Etgar Keret, Per Petterson, Fadhil Al-Azzawi, W.G. Sebald, and Can Xue.

This month sees the release of their fourth annual Queer Issue:

In two timely essays, Dmitry Kuzmin exposes the roots of recent anti–gay propaganda laws in Russia and Quentin Girard observes the protests against gay marriage in France. We also feature an excerpt from Tatiana Niculescu Bran’s The Confession, the basis for the award-winning Romanian film Beyond the Hills. India’s Vaishali Raode takes us into the world of Mumbai’s hijra community, and Taiwanese poet Jing Xianghai looks through photos from an old relationship. And we present fiction from Jordan’s Fadi Zaghmout, Cuba’s Anna Lidia Vega Serova, Slovenia’s Suzana Tratnik, and Austria’s Josef Winkler. In a special section of Sri Lankan writing, Ru Freeman, the author of A Disobedient Girl, introduces us to the work of Simon Navagaththegama, Ariyawansa Ranaweera, and Kalaivaathy Kaleel.

The magazine, in collaboration with Christopher Bram, will be throwing a celebratory party on June 19th at the Dalloway in New York City. The two-hour festivities will begin at 6:30 PM, paired with drink specials and a short reading at 7:15.