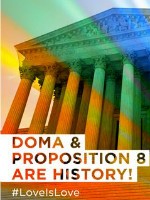 Though we still have a long way to go towards reaching full equality for all members of the LGBTQ community, the Supreme Court rulings on DOMA and Prop 8 are two major victories in the ongoing fight. Married same-sex couples are now allowed federal benefits, and California, our most populated state, is the 13th in the nation to legalize same-sex marriage. People throughout the country have taken to the streets, along with their social media accounts, to voice their support.

Read the reactions of those supporters by following the #LoveisLove and #MarriageEquality hashtags on Twitter, or check out Advocate’s list of the best celebrity tweets here.

The Long Road to Marriage Equality

George Chauncey, a professor of history and American studies at Yale, served as an expert witness in both same-sex marriage cases decided this Wednesday. In his recent essay for The New York Times, Chauncey discusses the often misunderstood history of the gay liberation movement, from the McCarthy-era to the vital problems lesbian, gay, bisexual, and transgender people continue to confront today.

It was not until the 1980s that securing legal recognition for same-sex relationships became an urgent concern of lesbians and gay men. In the 1950s, such recognition was almost unimaginable. Then, most states criminalized gay people’s sexual intimacy. Newspaper headlines blared the State Department’s purge of homosexual employees during the McCarthy-era “lavender scare.” Police cracked down on lesbian and gay bars and other alleged “breeding grounds” of homosexuality.

Where Are They Now?: ACT UP AIDS Activists 25 Years Later

And while we’re taking a look back…

ACT UP NY, the activist group founded in 1987 ­– known for their direct action during the AIDS epidemic to enforce legislation and bring about medical research ­– gathered in the West Village last Saturday for a “don’t-call-it-reunion reunion.”

[…] when one of the veterans, Jim Eigo, took the mike and started the old chant, “Act up, fight back, fight AIDS!” there were more than a few less-than-dry eyes in the house. Eigo is among the first-wavers who’ve started going back to the classic Monday night ACT UP meetings at the LGBT Community Center to address scary stats showing that HIV continues to rise at high rates among young gay men. Even ACT UP godfather Larry Kramer was there, despite frail health. The night’s new joke slogan? “Act up, fight back, fight age!”

Watch a slideshow of the event here.

The Bookish Queer: Locating Queer Literature, Then and Now

Alex Clements at HyperAllergic tracks the significance of written work from queer individuals during the 50s and 60s, noting the rise and fall of feminist bookstores and the ever-present challenge of seeking out books with LGBTQ content.

“Given all that history,” Clements wrote, “I was eager to hear how queer writers and bookish types found queer content in the past and how they do it today, when so many of the past networks would appear to have dispersed.”

Read answers from some prominent voices within today’s LGBTQ community, including: Sarah Schulman, Kamal Al-Solaylee, Tom Léger, Rae Spoon, and Mia McKenzie – among many others – here. [via Autostraddle]