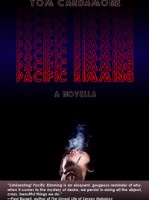 I am even less than I thought. The wind in the whorl and not the shell itself.

This is what the nameless narrator of Tom Cardamone’s new novella Pacific Rimming realizes early on in this drug-fueled odyssey of sex and lust. Suffering from a self-admitted obsession with Asian men (It is a constant source of warm agitation…Obsession is eternal, transcending but never transcendent, looping. I am obsessed.), our broken protagonist is not much of a conventional hero. He stakes out the same New York City bars, hopping from one to the next, preying and strategizing with the masterful skill of a professional predator. Yet, Cardamone is able to elicit compassion and empathy from the reader, allowing us to discover fragments of poetic beauty amongst the cracks and permanent damage. Our guide on this heart-wrenching, gut-punching journey is a lost soul. Although his addictive behavior is self-sabotaging and unhealthy with a capital H, we feel for him. His is an insatiable longing for something he will most likely never obtain, and he’s slowly killing himself in the quest. More, he says. Would you believe I’m looking for even more?

Cardamone captures the raw essence of a blinding obsession by creating a melodic, haunting rhythm to the language of his main character’s often shattered internal thoughts. There’s a hypnotic, mesmerizing quality to the literary universe he’s created, forcing us to explore every inch of it, even the darkest corners and it’s hardcore secrets that aren’t for the faint of heart.

Telling his tale in a first-person narrative is a clever choice for Cardamone, demonstrating his understanding of the importance of the relationship between reader and storyteller. To bring us deep into this underground world of drug addicts and go-go boys, we must have access to our narrator’s internal thoughts—even the frightening ones. Hearing this story told in a no-holds-barred confessional intimate voice not only makes the reader a voyeur into a life of somewhat shocking debauchery, it makes them an accomplice to what’s happening on the page.

When the narrator’s cool front of emotional detachment is challenged by the realization he might have accidentally fallen in love with one of his sexual conquests, Cardamone allows his main character to unravel, providing us glimpses into a man’s ultimate struggle against his greatest enemy: himself.  Though he opts for an ambiguous ending (the possibility of a happily-ever-after is dismissed by the end of the first page), Cardamone leaves us with echoes of a wild, electric energy that resonates with a powerful fierceness long after we’ve left his broken and beautiful world behind.

A Discussion on Fat Queer Literature with Ron J. Suresha and Philip C. Barragan
'The Evolution of Ethan Poe' by Robin Reardon
Mo’Nique to Star in Film Adaptation of Larry Duplechan's novel ‘Blackbird’

David-Matthew Barnes is the bestselling author of twelve novels, including five young adult novels. He is the author of over forty stage plays that have been performed in three languages in eight countries. His work has appeared in over one hundred publications. He teaches college courses in writing, literature, and the arts.