‘Hungry Ghost: Tales of the Pack Book 2’ by Allison Moon

‘Hungry Ghost: Tales of the Pack Book 2’ by Allison Moon 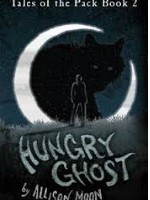 In the second installment of Allison Moon’s roguish self-published lesbian werewolf trilogy, Lexie and her Pack struggle both with their newfound freedom from their domineering former leader, Blythe, and with new troubles bubbling to the sleepy surface of Milton.

Plagued by her love Archer’s absence and by the news of her mother’s involvement with the Pack at the time of her death, Lexie has a lot of healing to do as well. The aggressive Rare wolves launching a spate of attacks on the women of Milton is the catalyst for Lexie finding her way out of a deep physical and existential slump.

This is not your average fantasy novel. While the action, plot, and hearty descriptions of food, sex, and anger, are enough to keep readers engaged and sympathetic, it is the teachable moments, the attitudes about feminism, queerness, gender, and body image that carry the weight of story.

On the nights of a full moon, the Pack goes out “running”: We “just run around mostly…” Jenna, the hippy, maternal figure of the Pack explains.  “We chase things, wrestle, rough house.  You know, like girls do.” Characters take every opportunity to express their particular philosophies regarding prevalent issues in the queer, gender variant, kink, and freak communities. The result is that the book sometimes reads as a user-friendly crash course in current queer theory and what it all looks like in practice.

For a majority of the book, Lexie tries many times, to no avail, to transform into the wolf she knows herself to be. Not being able to transform into her wolf, Lexie feels “betrayed by her body.” It is not until she pays an exasperating visit to her aunt that, out of anger and frustration, Lexie is able to access that primal part of herself, let go of her human form, and change into her wolf.

In such fervent and muscular writing, Moon tells the story about the different ways it is possible for a woman or a wolf to be inside a body–whether it’s one’s own, or someone else’s. Drawing parallels between transforming into a wolf, coming out as queer or trans, and how our sexual and animal identities might affect the ways we relate to our bodies, is the thickest thread in the novel.

As much about body image as it is about queerness and feminism, the story keeps coming back to the rascally and tricky things our bodies can do to us and tell us about who we are, how strong or weak we are, and what we are capable of.

In a world where curves are “wicked” and bodies are “dangerous,” S/M and the pleasure/pain dichotomy recur in scenes not only about transformation, but also about what it feels like to occupy the space between one feeling, one way of being, and another.

Lexie struggles not only to reconcile her human form with the wolf inside her, but to embrace both simultaneously. This journey turns out to be for her own self-realization as well as for the survival of the Pack.

As they prepare to battle the Rares, the Pack learns to hold both their human and wolf forms together, under the same skin and at the same time.  Thus they embody a “space between thoughts,” a place of magic that can only be realized through self-love. At the climactic duel, Lexie assures her Pack-mate, after a near-death experience, “Thank your wolf for coming to you and send it back inside. She’ll always be there, she’s yours to call forth when you need her. But she is obedient to you.  You have the right to decide how to claim your form.”

Moon creates a voluptuous, sensory experience that will rouse your appetite for pleasures and pains alike. The story moves us along at a relentless clip by impassioned and emotional writing, while striking an engrossing balance between the serious and the playful. This book will have you wishing to run with the Pack at the new moon.