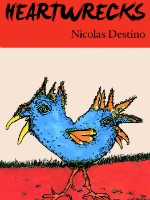 Part of the mission of Sibling Rivalry Press is to “develop, promote, and market underground artistic talent—those who don’t quite fit into the mainstream.” Editor Bryan Borland and company have certainly succeeded in this aim with Nicolas Destino’s Heartwrecks, a quirky volume of poetry that contains no small supply of whimsy.

The collection opens with “Resurrection,” a prose poem (many of the pieces in the book are prose poems) which places the reader in “the city [where] they were erecting the moon every night /with ropes.” This poem put me in mind of the classic Georges Méliès film A Trip to the Moon (1902) and effectively set the tone for the rest of the collection, a series of surreal and wondrous pieces that feature linguistic and imagistic experimentation.

The aptly named “Fantasy,” for example, uses the trope of a kite in the wind to explore a relationship, as the speaker and his companion ruminate on their love of wind and ultimately find themselves on

…a boardwalk where
a sign alerted us that all wind
was cancelled until we were
ready to lose one another.

This playful, narrative weirdness is reminiscent of James Tate, though many of the works in the collection seem to owe more to the ideals of the L=A=N=G=U=A=G=E school of poetry, with its emphasis (and I’m generalizing here) on disjunction and the privileging of sound over expression.

Still, it would not be accurate to say that Destino eschews expression entirely. While some poems such as “Genesis,” which reads, in part: “And you by the pond, pre-thruway, counting ducks /plural then back to zero. How many you are, among /innumerable twigs having become other kinds of /sticks, let’s stay toothbrushes, let’s say drinking straws…” seems to be more interested in sound than sense, other pieces are quite emotive. “Technicolor,” for example, written for Tyler Clementi, the gay Rutgers student who committed suicide by jumping off the George Washington Bridge in 2012, describes the speaker’s “million or more friends” as “Faceless heads among the colors /of the towers, and the colors of /towers turning to pink” before relating how “my million friends /turned into colorful balloons.” Even in this moment of despair, we see a remarkable beauty in Destino’s vision of the world.

Similarly, “Stand Partner” is a poem that is both linguistically playful and remarkably tender. Punning joyfully, the speaker tells his beloved:

Here and elsewhere, music is a recurring theme, which is unsurprising considering that Destino is a trained violinist. Frequent references are made to chords, keys, composers, and instruments and, though I do not know much about the mechanics of music, I did not feel lost in or overpowered by the allusions.

Unfortunately, the same can’t always be said for his linguistic technique. Though I consider Destino’s wordplay to be primarily a strength, it can also be a liability. There were moments in the book where I felt like the honesty of the poem was being buried beneath clever excess. “The Pines of Rome,” for example, insists on itself in lines such as “Opaque and often bound opal /over pastoral elegiac flow /overt with ostracized oboes.”  This and other poems are, well, “opaque.” While this poem in particular can be seen as an experiment in sound, other poems such as “Impersonal Ad” distract us from the poem’s emotional core with appellations for the beloved like “obstinate bed-hog” and “craving cartographer,” which are so self-consciously “weird” that they risk distancing the reader from the human experience at the heart of the poem.

Still, despite its flaws, Heartwrecks is a strong debut for Nicolas Destino. He has a keen sense of sound and a strong, confident voice that is simultaneously grounded in tradition and uniquely his own. Keep an eye on this poet; he has much to offer.

Charlie Bondhus' poetry book All the Heat We Could Carry won Main Street Rags Annual Poetry Book Award for 2013 and is due out in November. He has also published How the Boy Might See It (Pecan Grove Press, 2009), a finalist for the 2007 Blue Light Press First Book Award, and two chapbooks What We Have Learned to Love, which won the Brickhouse Books' 2008-2009 Stonewall Competition, and Monsters and Victims (Gothic Press, 2010). His poetry appears or is set to appear in numerous periodicals, including The Hawaii Review, The Wisconsin Review, The Alabama Literary Review, The Sierra Nevada Review, Cold Mountain Review, The Baltimore Review, and others. He holds an MFA in creative writing from Goddard College and a Ph.D. in literature from the University of Massachusetts, Amherst. He teaches at Raritan Valley Community College in New Jersey.