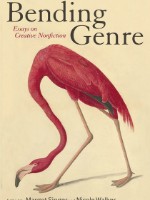 Most writers understand that narratives are constructions that can never truly or objectively capture the totality of an event. Using the individual lexicons at our disposal, we try a posteriori to “capture” or “recreate” an experience as best we can. These writers realize that there is no definitive boundary between “fact” and “fiction” when it comes to literature. No wonder the generic distinctions of “fiction” and “nonfiction” seem ill-fitting or, indeed, fabrications themselves.

And, yet, while writers know that narratives are deliberate, linguistic constructions, oftentimes they and their readership are challenged by questions of “truthiness,” more often than not, so that their work can be pigeonholed into the appropriate genre. It is at this critical juncture that Margot Singer and Nicole Walker have entered the debate with their new anthology, Bending Genre: Essays on Creative Nonfiction, in order to think beyond the ethical questions of truthiness that have plagued literary writing.

Singer and Walker, both scholars of creative writing and creative writers themselves, collaborated with over two dozen established writers to present a collection of essays on the literary form and aesthetic of creative nonfiction—that relatively recent and feisty hybrid genre “commonly defined as fact-based writing that uses the techniques of fiction to bring its stories to life.” The volume is divided into three parts, with each contributor offering their own theoretical analyses or innovative interpretation of “creative nonfiction.” Emphasis is placed on the genre as a “queer hybrid”: “[t]he hybrid is transgressive, polyvalent, queer”: it “does not simply borrow elements from fiction and poetry, but bends and recombines them to make a hybrid that perpetually troubles and transcends generic bounds.”

Throughout the three parts of the anthology “the essay” is lauded as the queer literary form par excellence. Playing upon the doubleness in meaning—both in its noun (a literary form) and verbal (“to try or to attempt”)—many of the contributors champion the essay as “a site of resistance,” to quote David Lazar in “Queering the Essay”. In style and in form the essay is daring; it is, Lazar continues, “a place where things have happened rhetorically as well as formally that haven’t happened elsewhere.” In “On the EEO Genre Sheet,” Jenny Boully discusses how she uses this “site of resistance” as a pedagogic tool in the classroom. T. Clutch Fleischmann and editor Singer give their attention to individual modalities of the essay: Fleischmann writes about the “bent essay” that “Acts Up and steps outside of the lie it was supposed to stand behind,” while Singer describes the “hermit crab essay” as that which marks the “scaffolding” or “false documents” attached to the central prose. The essay is utilized by a variety of writers—scholarly and otherwise—because it is a liberating and liberated form.

In this regard, Bending Genre as a whole is seemingly random, and therefore, a wonderfully queer enterprise. Collectively, it is not entirely criticism; not entirely creative writing. Singer and Walker collate the essays to destabilize the reader’s assumptions and expectations of the text—and they do so successfully. The anthology is also queer because it raises more questions than it offers answers. One question that repeatedly comes to mind while reading the essays is one of methodology: the genre of “creative nonfiction” is an a posteriori construct, but it is interrogated as if it were an a priori category. To rephrase, the genre would seem to post-date the writing, and yet writers like Mary Cappello, in “Propositions; Provocations: Inventions,” make me wonder if writers write with a mind to genre—that “creative nonfiction,” she says, is “a vehicle” rather than an afterthought. The idea of writing in accordance with a genre seems rather limiting; however writers do indeed write with a form or even their own idiosyncratic aesthetic in mind. So, why not genre?

Perplexing and intellectually stimulating, Bending Genre and all the questions it raises continues the discussion outside of the text. What is particularly noteworthy of Singer and Walker is that their project—much in the vein of “queer” and of the notion that writing, like critical thinking, is interminable—remains alive online. They have harnessed the powers of new media to keep the discussion going, both on Facebook as well as the project’s website.

'A View from the Bottom: Asian American Masculinity and Sexual Representation' by Nguyen Tan Hoang
'History is All You Left Me' by Adam Silvera
Spider Love Song and Other Stories by Nancy Au