‘The Summer We Got Free’ by Mia McKenzie

‘The Summer We Got Free’ by Mia McKenzie 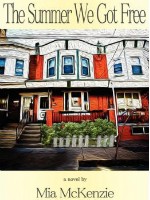 If you are reader of Mia McKenzie’s blog, Black Girl Dangerous, you already know, and you’re probably already excited to read The Summer We Got Free, Mia McKenzie’s debut novel. For those of you who do not know, you are about to be introduced.

I will not give you all of the salient details of this layered, complex, and absorbing novel in this brief review—no spoilers here. Still, I need to ask you a few clarifying questions. Are you interested in a novel that is simultaneously critical social commentary, ghost story, murder mystery, and queer love story? If you were interested in such a novel, would it matter to you that the craft of the writing is deceptively plain, and in that simplicity, achingly poignant, laser-like in its facility and effect? Me too. I love that.

Finally, if you found out that the author was a fiercely brilliant black queer woman, who layers on discovery, insularity and secrets with a deft touch, would you be queuing up to get a copy of this book? Thought so. Here’s a sample of what may be the central theme of the book, and a prescription written for so many of us:

Afterward, after they took Paul away, I couldn’t stop thinking that she was dead because of how something had seemed. Not how it really was. I decided then that I would never be satisfied with how anything seemed—a situation or a person. I would always look deeper and try to see what was really there.

Family, love, lust, desire, death, and grief: if, like me, even as a black queer, you don’t feel an automatic knowledge and kinship for these characters, you will feel the universality of these themes. One of things that blew my mind about Mia McKenzie’s book are the lovely, surprising moments of clarity she leaves for the reader to find and exclaim over. The realization of just how skillfully she has woven her tale and her characters. For example, one becomes aware that each character embodies a familiar emblem, or side effect of Blackness, while tying to universal themes of humankind. In our “othered” lives, it is a sadly familiar feature of the landscape: a broken and insular family, one is vilified for her very dark skin, a black male living “on the down low” keeping his male lovers a secret, another black male is formerly incarcerated, and the powerful and dangerous extremes inherent in Black Church. There is a sexually blocked perennial victim, a blocked and frustrated artist, and a mother who has lost both her father and her son to violence. Instead of taking a single character through a series of experiences that could illustrate these truths to the reader, McKenzie populates the city block with the facts of our lives, and not surprisingly, these stark facets of black life do not make for especially likeable characters. Brilliant, because we don’t love these aspects of our lives, but we work with them, and hope to free ourselves. Who got free, and cast off what only ‘seemed’ to be true for them? Ava and Geo, Regina and George, Paul and Helena, Sarah—each one struggled to shift aside the cloying complexity of their previously formed identities. The ghost is laid to rest; the cycles of blame are broken.

Society is often both attracted and repelled by the artist, just as artists are often attracted and repelled by their own vision and talent. McKenzie gives this concept blazing vivid life in The Summer We Got Free. In order to follow the engrossing, deeply familiar, and sometimes harrowing mystery, you’ll have to read this novel, and celebrate with me that this black voice is loud and clear, that Mia McKenzie, artist, got free.