Read More Than Each Other: Books Every Black Gay Man Should Read

Read More Than Each Other: Books Every Black Gay Man Should Read 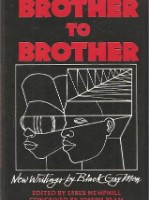 This week, Mused released a list of  must-read literature reflecting the experiences of black gay men. Books covered include Essex Hempill’s Brother to Brother, an anthology that merges prose and poetry to capture the lives of those who were affected by AIDS, E. Patrick Johnson’s Sweet Tea—an oral history of black gay men in the south—and the current Lambda Literary Award finalist Keith Boykin’s For Colored Boys Who Have Considered Suicide When the Rainbow is Still Not Enough.

[…] for black gay men, reading is not only fundamental; it is crucial to shaping positive images of our identities, especially since we seldom (if ever) see truthful depictions of ourselves in other forms of media.

The events that took place on June 28, 1969 at the Stonewall Inn in Greenwich Village are regarded by many as the flashpoint for the gay and lesbian rights movement, and the reason we are still fighting for basic human rights today. Bluewater Productions seeks to partner with artist Michael Troy to commemorate Stonewall in a graphic novel.

“Civil rights are not just an American tradition; it’s a birthright,” Bluewater president Darren G. Davis said. “When I recognized that Stonewall was quickly fading into an obscure footnote, I had a obligation to remind people that civil rights comes in all colors, shapes, genders, political views and social choices.”

The graphic novel is being funded through the Indiegogo website and aims to focus on the events leading up to the groundbreaking evening, as well as its significance as the origin of gay pride. [San Diego Gay & Lesbian News]

The National Leather Association: International, “a leading organization for activists in the pansexual SM/leather community,” recently released the winners for their excellence in literary works award for SM/Leather/Fetish writing published in 2012. See winners below and learn more about the association here.

Victorious in the Pauline Reage Novel category is L. M. Somerton for “The Portrait’ (Total-E-Bound). The judges were unable to concur on second place honors this year with 27 novels submitted for consideration. Honorable mentions therefore go to The Masters of Falcon’s Fantasies by Cassidy Browning & Reggie Alexander (Siren Publishing), Power Exchange by A. J. Rose (Voodoo Lily Press), Eve Portrait of Submission by Steve Maser (Pink Flamingo Publications), Beyond the Edge by Elizabeth Lister (MLR Press) and A Forbidden Love by Lee Dorsey (Pink Flamingo Publications).

Nominations for literary works published in 2013 will open later this year.