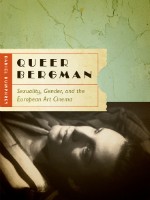 The things gay men do outside of same-sex sex, the way they are, their subjectivity, are well documented in popular stereotypes, but less so in scholarly writing. Daniel Humphrey, in his new book-length study on the Swedish auteur Ingmar Bergman, points out that since Bergman’s films were brought to America in the 1950s, gay men have been watching them in a unique way that was then “foreign” and today seems just as “strange”—two adjectives Humphrey spends a large amount of his book historicizing. Combining theory-heavy formal film analysis and a compelling treatment of urban homophile history, Humphrey enlivens a forgotten mode of Cold War-era queer art-house spectatorship in order to offer up “other ways of being homosexual” that are at once historical and new.

Humphrey situates Bergman and his fans, a pretentious bunch of gay men—“Monica Vitti queers”—as outside of, or foreign to, the well entrenched Stonewall origin myth of gay rebellion. In order to “rethink the history of the entire Cold War-era U.S. gay rights movement” he positions Bergman alongside Tennessee Williams, James Baldwin and Gore Vidal as artists challenging patriarchal heteronormativity before garbage cans met windowpanes at the Stonewall Inn, and he demonstrates in Bergman the development of a sensibility that may not have been marching proudly those days in June 1969.

It’s surprising for any discussion of queer cinema spectatorship to reject Camp sensibilities, but that’s just what Humphrey does. He explains that rather than appreciating Bergman’s films with a Camp sensibility or a “sly understanding” of coded homosexual hidden meanings—the M.O. for many American art house queers consuming Jack Smith, Kenneth Anger, and Warhol with an ever-winking, ever-elitist grin throughout the 50s, 60s, and 70s—the Cold War-era queer Bergman spectator was watching the films with a potent “sincerity,” the “paramount value required in any queer engagement with the work of Bergman.”

Humphrey (re)affirms the riches found in sincere cultural consumption so that, though my instinct is to object and scream no, Camp is left with a questionable political value—as it was when Sontag first noted it. Humphrey cites homophile publications of the Cold War-era such as The New York Mattachine Press and the exclusively lesbian publication, The Ladder, to demonstrate that though it has been neglected by queer scholarly writing, foreign art house film was commonplace in homophile writing of the day. Moreover, Humphrey shows that these homophile-cinephile writers did not celebrate a Camp appreciation of Bergman’s films, but called for a sensitive appreciation of his unpopular but serious films. It is this idea of “sincerity”  that appears old but new to a modern queer reader. Sincerity might jolt us from our irony-inundated apolitical slumber, sincerity might be a means for self-discovery, but in this time when Camp reigns supreme amongst gays snickering as Mildred Pierce is slapped by her daughter, sincerity is not often thought of as a queer way of being.

As with any formal film analysis, the clammy hands of Freud hang like the proverbial sword over Queer Bergman. Humphrey writes that he hopes to approach familiar theories with “an appropriately queer refusal to commit to a single and unidirectional method,” but his study of Bergman’s films has to trudge through the ever-present Freudian characters before it reaches its queer apex. Humphrey’s queer ingenuity really begins when he starts discussing Bergman’s signature shot: “a shot of one or two characters looking directly into the camera at moments of dramatic intensity.”

The alienating function of the direct address or “look back” is well, well, well documented—I once had a film professor who forbade the words “self-reflexive” or “direct address” in her class on Godard because they are so completely sapped of new ideas—and yet Humphrey’s notion that the shot is a kind of “opposite-gender mirror” (148) startles. With the queer bent I have been waiting for, Humphrey attributes to the “look back” a power that challenges “a filmgoer’s belief in stable gender identification” (151). Moreover, he exalts Bergman and his actors as serving more than the “Marxist revolution” for which alienation techniques like the direct address were initially used; according to Humphrey, Bergman’s uncomfortably long self-reflexive shots affirm a “painful sincerity” that acknowledges gendered identities as constructed, but gendered pain as substantial. It’s a meaningful conclusion to an intensely formal analysis, and it comes at exactly the right moment.

Exploring the past we discover the alterity of our own present, yet in the present we cling to what seem like the new ideas of the past. Humphrey’s work retrieves, through Bergman, sincerity as a forgotten or abandoned queer way of being, and exactly because it is not new, queer readers will be drawn to the potential of this less-celebratory sentiment.

'Freeing Ourselves: A Guide to Health and Self Love for Brown Bois' by The Brown Boi Project
Judith Frank: On Mourning, Taking on Volatile Subject Matter, and Queer Relationships
'Not Every River' by Robbi McCoy

Justin is a writer and teacher working on his first novel. You can follow him on twitter @AbrahamLinds