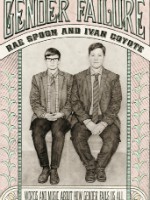 Artists Ivan Coyote and Rae Spoon come together once again in their 2013 tour of Gender Failure—a mixed-media performance combining spoken word, original music, and visuals by animator and musician Clyde Peterson in an “exploration and expose of their failed attempts at fitting into the gender binary, and ultimately, how the gender binary fails us all.”

Coyote and Spoon, who have been working together since around 2006, have received great praise for their powerful and honest portrayals—“equal parts hilarious and heartbreaking”—of what it is like to live in a world that often lacks the language to fully realize the experiences of those who do not conform to gender stereotypes.

From Coyote in Gender Failure:
(transcribed from spoken word)

I realize that the English language is sadly devoid of names for people like me and I try to cut the world some slack for this every day all day and the day after that too. But the truth is that every time I am misgendered like this, I am reminded that I do not fit, that I am not this and I am not that. I am not seen. I can’t be recognized. I have no name. I am invisible and that tiny little sliver of me disappears…

…words are always imperfect; words are just sounds we make with our mouths that point our minds to think of things that cannot be fully described in words anyway. I am a writer so I know exactly where words fail us and I know that a name is not a person, it is just what we have agreed to call them.

The show has already hit Vancouver, The 27th London Lesbian & Gay Film Festival where it was sold out days in advance, and last night it wrapped up the 2nd Annual Transgender Week of Awareness in Regina, Saskatchewan. Next week Gender Failure will be performed in NYC’s Dixon Place April 12-13 at 10 p.m. A video of their performance in London is available for viewing online, and you can visit their Facebook page to be updated on forthcoming events.

10 LGBT-Themed Novels That Every Student Should Read

Last week the California Department of Education released their new recommended reading list for its 6.3 million K-12 students, and though only about 32 books are categorized as LGBT-themed out of the 7,800, it is at least a step forward in terms of the school system outwardly recognizing and verbalizing the experiences of queer and transgender characters as so—recognizing that sexuality and gender, though not the whole of a person, certainly do affect how one sees and moves through the world, and should not be erased or ignored.

Some of the YA books recommended: Freak Show by James St. James which tells the story of “teen drag queen Billy Bloom” who is bullied in his conservative prep school and runs for homecoming queen in protest, I am J by Cris Beam, a book that follows a transgender teenager in his search for love and friendship, and Ash by Malindo Lo, a Cinderella retelling of a young girl named Ash who falls in love with the King’s huntress, Kaisa.

The list also includes: The Vast Fields of the Ordinary by Nick Burd (winner of the Stonewall Book Award), Wide Awake by David Levithan, Sweat: Stories and a Novella by Lucy Jane Bledsoe, and Totally Joe by James Howe.

You can search for books on the California Recommended Literature List on their website, and check out Flavorwire’s list of 10 remarkable LGBT-themed books that all students—and arguably everybody—should read here. [LifeSiteNews/Flavorwire]

The 5th annual Rainbow Book Fair, “the oldest and largest LGBT book event in the United States”, is happening on the April 13th  from 12-6pm at the Holiday Inn Midtown (44 W. 57 Street, NYC). The fair will include Come Here, a marathon poetry reading with over 50 LGBT poets, exhibits from some of today’s leading LGBT publishers, bookstores, and literary magazines, 47 readings, and appearances from: Sarah Schulman, Emanuel Xavier, Lesléa Newman, David Leddeck, and Julian Earl Farris.

To learn more and see the lists of events and featured authors visit the books fair’s webpage.

Also next week, on Sunday April 14th from 10am to 5pm., McNally Jackson and Housing Works Bookstore will be celebrating the literature and writers of New York in their Downtown Literary Festival, an event aimed at showcasing “the diversity and creativity that characterizes downtown NYC.” The celebration will reside in both stores, followed by a happy hour at Housing Works Bookstore, as well as an after-party at Pravada sponsored by HarperCollins.

Some of the day’s many events include: Lunch with Frank O’Hara with selected readings by authors Eileen Myles, Colm Tóibiín, and Wayne Koestenbaum, among others, and Downtown Writing from ‘The Paris Review’ Archive with a performance of Jack Keruac’s 1968 Art of Fiction interview and readings from the poetry of Ann Waldman. See the entire list of events here.

While we’re on the topic of exciting forthcoming literary events, the 10th Anniversary of The Saints and Sinners Literary Festival takes place May 23-26 in New Orleans, Louisiana. The festival began in 2001 with the goal of bringing together strong voices in the LGBT community in order to spread information about HIV/AIDS  prevention through “writers, thinkers, and spokes-people,” and to celebrate the literary arts.

Now in its [tenth] year, the Festival has grown into an internationally-recognized event that brings together a who’s who of GLBT publishers, writers and readers from throughout the United States and beyond. The Festival, held over 4 days each Spring, features panel discussions and master classes around literary topics that provide a forum for authors, editors and publishers to talk about their work for the benefit of emerging writers and the enjoyment of fans of LGBT literature.