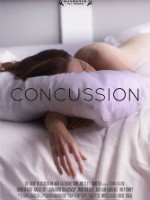 Writer and director Stacie Passon’s debut feature film Concussion made its world premiere at the 2013 Sundance Film Festival and has since received much praise and support not only from the LGBT community but from all manners of cinema and story-lovers alike.

The film follows Abby: “an interior designer turned soccer mom who wakes up one day–after suffering a bad bump on the noggin–to the feeling that the spark has gone out of her life, sexually and otherwise.”

Abby, who lives in the suburbs with her wife and their two children, puts herself back to work in Manhattan where—after a couple of bouts with low and high-end hookers—she becomes a prostitute who entertains both gay and sexually curious women.

But one of the quietly revolutionary things about Concussion is that it takes Abby’s sexuality and her domestic situation as givens and proceeds from there. (The Kids Are Alright 2 this isn’t.) The movie’s true subject is a problem–the loss of passion–that can happen in any relationship, and Passon addresses it in a series of smart, funny and surprising ways.

Concussion is produced by Rose Troche, co-writer/director of the groundbreaking film Go Fish and writer/director of several episodes of The L World. The movie is set for release in the fall of 2013. [Village Voice]

Eloise Klein Healy, poet laureate of Los Angeles, has been ordered by her doctor to take some time to rest while she recuperates from a medical issue, and has canceled forthcoming events and appearances. According to GalleyCat, Healy “looks forward to making a full recovery and resuming her duties.”

If you want to send support or cards to Healy, you can write to this address:

On Labels (For Books and For People)

The role of labels in literature, and all at art forms, is a topic that has been discussed and debated time and again by a diverse range of communities. While some believe labels aide the search of those who are wanting and needing to see representations of themselves in the world, others offer up the point that labels can also be reductive of the content in an artwork by cornering it into one category.

In her recent Tumblr post, Author Malinda Lo talks about her personal experiences with labels by answering the question: “What do you think about novels being labeled a ‘lesbian novel’ or a ‘gay novel’ simply because the primary love interest isn’t straight?”

In addition, Casey the Canadian Lesbrarian discusses her frustration “with the detective work necessary” in finding books that include queer content in her essay: “Why I Don’t Want to Be a Queer Book Detective Anymore.” [Autostraddle]

Read This! A Chapter from Bernardine Evaristo's Award Winning 'Girl, Woman, Other'
'Motherland: A Memoir of Love, Loathing, and Longing' by Elissa Altman
Chad Harbach: The Strategies of Baseball, Friendship, and Love