Aaron Hartzler: Waiting for the Rapture

Aaron Hartzler: Waiting for the Rapture 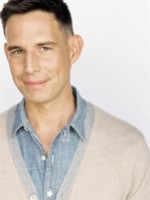 “A librarian who read the book recently contacted me and said, ‘I loved your book, I just wish there had been more gay content in it.’ Of course my response was, ‘Me TOO!’ I wish I had been able to knock down the closet door at 16 and take the world by storm.”

Aaron Hartzler grew up in a home where he was taught that at any moment the Rapture could happen. That Jesus might come down in the twinkling of an eye and scoop Aaron and his family up to heaven. As a kid, Aaron was thrilled by the idea that every moment of every day might be his last one on planet Earth.

But as Aaron turns sixteen, he finds himself more attached to his earthly life and curious about all the things his family forsakes for the Lord. He begins to realize he doesn’t want the Rapture to happen just yet–not before he sees his first movie, stars in the school play, or has his first kiss. Eventually Aaron makes the plunge from conflicted do-gooder to full-fledged teen rebel.

The book has received excellent advanced praise, including a starred review from Kirkus in which they call it “a hilarious first-of-its-kind story that will surely inspire more.”

Hartzler, who grew up in a fundamentalist Christian home, sat down to answer a few of Lambda’s questions.

The memoir goes into great detail about the rules that your parents set for you and your siblings, including a very restricted access to pop culture. Is there anything about the average American childhood you feel you missed out on?

Well, there were certainly a lot of pop culture references I missed out on. I didn’t even see Grease until I was in college. I think it was different when I was a kid. There was no Internet and there was no reality television yet, so as a teenager, movies sort of became the Holy Grail. When E.T. came out the summer before I started second grade, that was my first realization that I might be missing out on something. As I got older, I started paying more attention to TV. We didn’t have one at home in the living room until I was 17, but I would see TV shows here and there—mainly at my grandparents’ house: Facts of Life, Gimme A Break, 227, Different Strokes, Golden Girls, Designing Women. I couldn’t get enough. There’s a scene in the book where I’m 15 and sneak out to see my first movie in a movie theater. It was one of those life-changing moments. However, in hindsight, there were big advantages to not having free reign of the TV. My parents gave us the gifts of music and books. I got the chance to do lots of things other kids didn’t. I was in plays at the Bible college where my Dad taught. I fell in love with acting, and singing, and playing the piano. I went to the library. I loved reading. Loving books was my first escape and truly the reason I am a writer today.

There’s a scene where you’re on the bus and you giggle at something, and a boy starts making fun of you for having a “girly” voice. Did you have to deal with any other bullying from your peers, especially as you got older?

That scene in the book is very indicative of the kind of bullying I got as a child. Back then, in the mid-80s when I was in grade school in the middle of the country, I didn’t hear a lot about being gay. I remember seeing a graphic behind the head of a newscaster that said, “AIDS” and I was confused because there was a diet supplement called “AYDS” at the time for women trying to lose weight. I was sheltered from the really horrific types of bullying we hear about today. The class sizes at my Christian school were so small that no one really got away with a lot, and singing and theatre were looked upon favorably, so there weren’t many hoops I felt I had to jump through. Being taunted for being girly was the worst it got for me, but it’s that same misogyny that is at the root of every gay bashing and all homophobia; it’s this idea that the worst insult you can hurl at a boy is calling him “girly.” My response now, as it was then, “What’s so wrong with being a girl?” I think you can argue that all homophobia really starts with the demonization of what is perceived as feminine.

The exact moment you realized you were gay was in high school when you were shown a documentary on LGBT people—did you really not know until that point?

It wasn’t anything nearly as “fair and balanced” as a documentary, but was actually a VHS tape with a seminar about having a “Christian World View” that used footage from a gay pride parade to show the opposite of what we were supposed to be doing. That was the moment of recognition that sort of blew my circuits. During the video I was almost internally exploding, and I was afraid everyone in the class was looking at me. Suddenly, I had a word for what I intuited about myself, and I saw clearly, visually, what that word meant.

In Rapture Practice, you strongly develop a couple of romantic relationships you had with girls, all the while puzzling through your feelings for your best friend. How authentic were these relationships to you as a teenager?

I didn’t come out until after the events detailed in this book, and true to that timeline, this is less of a coming out story and more of a coming-of-age story. The fact that I’m gay is certainly woven in, but it’s layered in so that the reader realizes this before Aaron does in the book—which is true to my experience. A librarian who read the book recently contacted me and said, “I loved your book, I just wish there had been more gay content in it.” Of course my response was, “Me TOO!” I wish I had been able to knock down the closet door at 16 and take the world by storm. That’s one of the tricky and delicious parts of writing memoir: you have to write what really happened, and sink back into that head space to really mine the emotions that were going on inside you at that time—not what you think about it all now. As to my relationships with the girls mentioned, they were as authentic as any other I had. I was learning and exploring what it was to be a sexual being for the very first time in the midst of an environment where no teenager was supposed to be having sex—at all—even if you were straight. Before I labeled myself as “gay” I had to figure all of this out, and for me, that included girls. As a teenager, at some point, I think friction is friction. I always remember what Tim Miller wrote in his amazing book Shirts & Skins. When he talks about being a teenager he notes that we’re all a little queer in high school.

It’s not covered in the memoir, so I have to ask: when did you tell your parents you were gay and what was it like?

I came out to my parents for the first time when I was 19, and then went back in the closet and dated a girl for another year and a half or so—just to give it the good college try. Eventually, I came out to everyone else, and have had to come out to them every other year or so since. I am unflinchingly honest in my writing about them, but I love them very much—even though there are things upon which we will never agree. I did not write this book “like my parents are dead.” They aren’t. Part of memoir is figuring out which stories to include and which to leave out. Hopefully, I’ve chosen wisely. I’ve said since the day I started writing it that I want this to be a parade, not a baseball bat.

The teenage Aaron Hartzler in Rapture Practice is so set on becoming an actor and working on Broadway that when someone asks him what his “Plan B” is, he responds with something along the lines of, “I don’t have a Plan B. I don’t plan to fail.” I love this. Do you think it’s vital for teenagers chasing their dreams to have this attitude?

Not only vital, I think it’s essential. You must have dreams, and you must shoot high, and you must be willing to walk through doors right as they open. In my 20s I moved to L.A. and it took some time bloodying my shoulder against closed doors before I finally noticed an open door I’d been running by as I tried to barrel into the locked ones at the end of the hall. This was the room that said “Writing” over the door.

There are people that know from early on that they want to go into pre-law or pre-med, and I very much envy those people. But, as I’ve learned, everyone makes his or her own way. The “creative life” isn’t a destination—it’s a path.

The relationship with Bradley is so perfectly portrayed on the page. Is it safe to say Bradley was not only your best friend but your first love also?

Yes, I think so. I sent the real Bradley (not his real name) an advance copy of the book, and was very relieved when he reacted positively. We’re actually still in touch and he’s very supportive.

Do you write fiction?

I do. I’ve had the good fortune of landing a screenwriting gig recently, and have a novel in the works.

Did you make the conscious decision for Rapture Practice to have more of a focus on the religious aspects than the typical LGBT plot?

The only conscious decision I made was to tell my story as honestly as possible. While there are certainly gay themes in the book, I don’t think of it as strictly a “gay book” or a “religious book” or a “teen book”—it’s all of those things, and so many more. Complicated stories defy categorization, I think. I will let other more qualified people decide where to put it in the bookstore. I sense that the book will find its way to the people who need this story most—regardless of where it’s shelved.

Brent Taylor is a teen in Kentucky. He blogs at naughtybookkitties.blogspot.com and interns in children's publishing.